Overview of the GBP/USD pair. September 30. A new round of negotiations of the EU-United Kingdom. 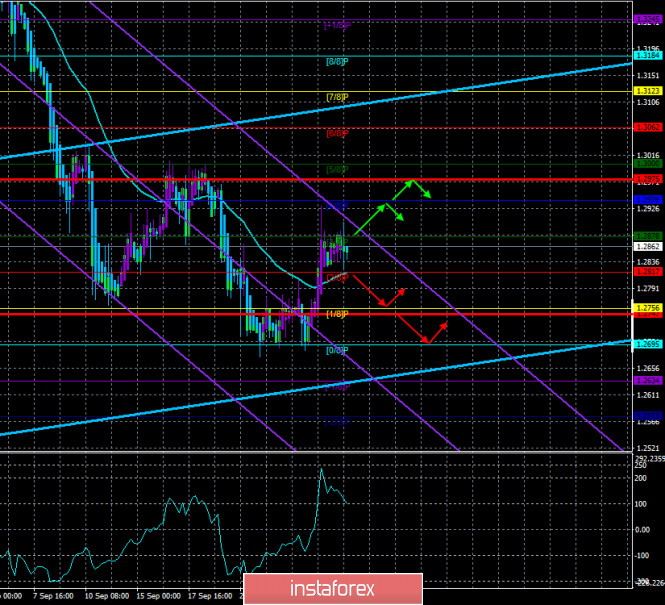 On Tuesday, September 28, the GBP/USD pair was in a much weaker upward movement than a day earlier. Buyers kept the pair above the moving average line, thus, the prospects for a new upward trend remain. At the same time, the bulls failed to break through the Murray level of "3/8" - 1.2878, thus, the upward movement stalled near the specified mark. Thus, the technical picture is now ambiguous and it is quite possible to resume the downward movement since the moving average remains very close to the current location of quotes. However, not only the technical picture remains ambiguous. The fundamental background for the GBP/USD pair is probably one of the most interesting right now. There is quite a lot of information coming from the UK, a lot of information coming from the European Union, however, there is no need to talk about the United States. However, all this information is negative in 90% of cases. Negative for the dollar and negative for the British pound. So the equation looks like this: whose negative is more negative? The last few weeks remained for the US dollar, however, we remind you that before that, it was the British pound that grew for a long time. It increased when there were no special reasons for this. It's just that everything was bad and hard in America, thus, the pound grew. However, there was no positive news from the UK during that time period. However, even now, when the dollar began to grow, no positive news comes from the US. Moreover, for traders on the US dollar, a very dangerous situation has developed, which is called "uncertainty". No one really knows who will win the presidential election and what awaits the country in the future. Thus, in principle, the fall of the national currency before the elections is absolutely normal for any country. In general, both the dollar and the pound have very unsightly prospects.

Unfortunately for traders, the probability of going north is now equal to the probability of going south. Thus, you only need to rely on technical analysis when making trading decisions. As for the fundamental topics that are important for the pound and the dollar, they remain the same and there is not much news on them. Maros Sefcovic, Vice-President of the European Commission, made comments on the "behavior" of the UK today. In a nutshell, his speech was filled with colorful epithets that condemned London's behavior with its "internal market" bill. Mr. Sefcovic said that the protocol on the regime on the border between Northern Ireland and Ireland is part of the already agreed and ratified Brexit Treaty and London has no right to violate it, change it unilaterally or choose which points to comply with and which not. Thus, Sefcovic recommends that Britain should withdraw the bill as quickly as possible and "to restore the tarnished reputation". If London continues to push through this bill, any further negotiations will be very difficult or even impossible, and Brussels has already begun to study the possibility of applying to the international court of justice. Sefcovic also said that at the moment the UK's position on the Northern Ireland border does not meet the expectations of Brussels at all. Many points of the protocol are not being implemented, and many are not being implemented in full or late. It is noteworthy that yesterday the next round of negotiations on a trade agreement began, which may come into force after the end of Brexit. And on the same day, a second reading vote on the "Johnson bill" was to be held in Parliament. Thus, during the course of today, traders will probably receive a huge number of important and interesting messages from Britain and the EU that relate to the relationship between the Kingdom and the Alliance.

Also, a huge amount of important information should come from overseas today, as the debate between Joe Biden and Donald Trump was supposed to take place. So in the morning, all the news feeds will be full of information from that show. According to preliminary information from some media outlets, Donald Trump has significantly reduced the gap from Joe Biden in recent months, although we do not believe this information, since Trump and his administration have not done anything that could raise ratings recently. The constant and daily promises of the imminent invention of a vaccine do not count. Thus, the topic of US elections is beginning to gain special meaning and importance. After all, the election is just over a month away.

From a technical point of view, the bulls now need to overcome the Murray level of "3/8" - 1.2878. However, stomping around this level for a whole day suggests a rebound and resumption of the downward movement, since the moving average is located dangerously close. Thus, the reversal of the Heiken Ashi indicator will already warn traders about the dangerous possibility of resuming the downward trend. For the third trading week, in addition to the US debate between presidential candidates and Brexit negotiations, a fairly large number of important macroeconomic publications are also planned. In the first place is the report on UK GDP for the second quarter. Although market participants are already prepared for these figures, they can once again emphasize the difficult economic situation in the Foggy Albion. There will also be important macroeconomic publications in the United States. In general, the day promises to be very interesting, and volatility can be very high. 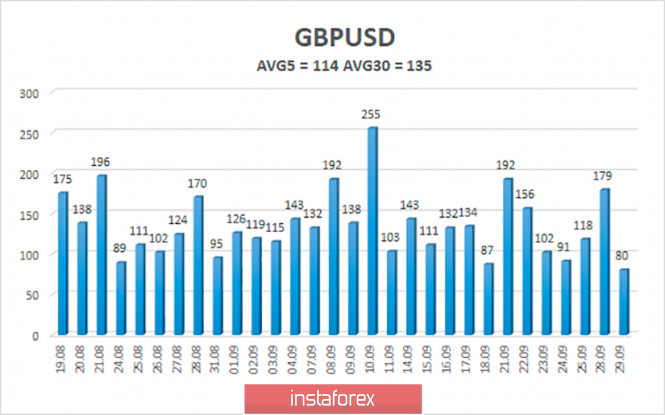 The average volatility of the GBP/USD pair is currently 114 points per day. For the pound/dollar pair, this value is "high". On Wednesday, September 30, therefore, we expect movement inside the channel, limited by the levels of 1.2747 and 1.2975. The reversal of the Heiken Ashi indicator down may signal about a possible resumption of the downward movement.

The GBP/USD pair started an upward movement on the 4-hour timeframe and broke the moving average line. Thus, today it is recommended to stay in the longs with the goals of 1.2939 and 1.2975 as long as the Heiken Ashi indicator is directed upwards. It is recommended to trade the pair down with targets of 1.2756 and 1.2695 if the price returns to the area below the moving average line.

Interesting? Write a comment below.
 #Overview of the GBP/USD pair. September 30. A new round of negotiations of the EU-United Kingdom.
Forward 
Backward 