Overview of the GBP/USD pair. September 8. London is going to abandon part of the agreements with the EU concluded earlier. 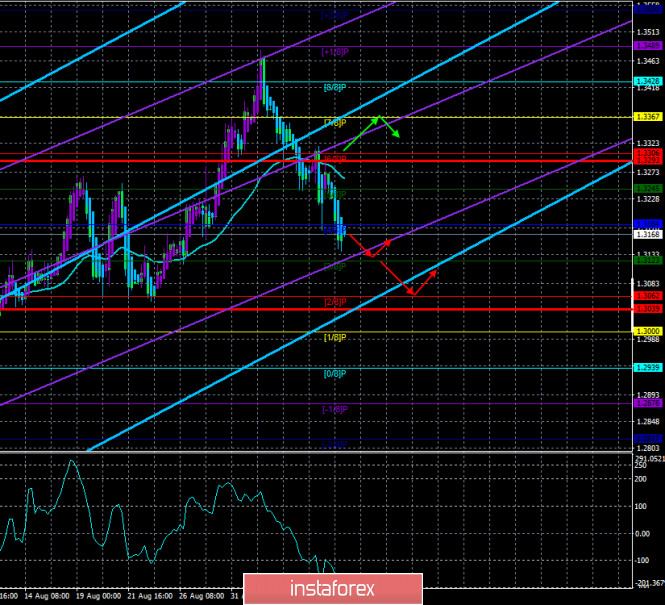 The British pound accelerated its fall against the US dollar on Monday, September 7. This happened after it became known about the new position of London and Boris Johnson personally on Brexit. Traders finally paid attention to the futility of negotiations and the lack of desire in London to negotiate. Thus, the pound began to fall after all, which may end in a new downward trend for the pound/dollar pair. So far, both channels of linear regression continue to be directed upwards, thus, we can not make a clear conclusion about the end of the upward trend. However, fixing the pair's quotes below the moving average line is sufficient to identify a change in the downward trend.

Since 2016, we have repeatedly called everything that happens in the UK as "clowning" and "punning". Such a serious process as leaving the EU after a 47-year stay cannot be easy and simple. However, it should not be accompanied by an annual change of power, a complete disagreement of the Parliament with the ruling party and the Prime Minister, and an inappropriately persistent desire of the head of state to break all ties with the European Union at all costs and start building his foreign policy from a "clean slate". For about 3 years, we wrote that the main problem with the entire Brexit process is that it was ambiguous from the very beginning. The results of the 2016 referendum showed that the majority of Britons want to leave the EU. However, this option was not supported by the majority of Scots, the majority of Welsh, and the majority of Northern Irishmen. 52% is not the majority of such an important and serious issue. 75% is the majority, and 52% is half. Thus, the second half of the UK population did not want to leave the European Union from the very beginning. Accordingly, almost half of the UK population was not satisfied with the results of the referendum and everything that has happened in the last four years. However, the charismatic Johnson came to power, who did nothing for the country for a whole year of his rule. It is difficult to say how the British themselves feel about Johnson, however, we do not see why we can call him a "strong Prime Minister". He "overshadowed" the "coronavirus" epidemic, the British economy has lost the most percent of all EU countries, there are no free trade agreements with the EU and the United States. The negotiations have failed, and London's desire to bluff in negotiations with Brussels would have been seen through by a first-grader. The most important thing that many forget is that Johnson wanted to leave the EU from the very beginning without any agreements, under the scenario of a "hard" Brexit. It is this option that he is implementing under the guise of "negotiations with the EU, in which it is simply not possible to come to a common opinion". Moreover, Johnson is not interested in the fact that both sides must concede in negotiations. The fact that the "hard" Brexit will be paid not by him, but by ordinary Britons, is also not very interesting to the Prime Minister. Now the media also gets information that London may refuse to fulfill part of the agreements concluded with the EU in the fall of 2019. At the same time, the media reports that the UK government is going to cancel the "key agreements" concerning Northern Ireland. It is not yet known how true this information is, thus, we need to wait for an official statement from Boris Johnson or someone from the British government. However, "there is no smoke without fire". Perhaps this information was intentionally released to intimidate Brussels. Although what is the point of Britain striking a blow to its reputation? After all, it will then have to conclude new trade deals. Who, after such a unilateral termination of the deal with the EU, will treat Britain "like a gentleman"?

In addition to unclear messages about the possible cancellation of some parts of the agreement with the EU, Boris Johnson continues to follow in the footsteps of his "big brother" Donald Trump and openly amuse his statements. It's a good thing Johnson doesn't speak as often as Trump, otherwise we'd have two major newsmakers. The British Prime Minister said that the parties (Brussels and London) must agree on an agreement defining the post-Brexit relationship by October 15. Earlier, Johnson had already given two or three deadlines, and, if you remember, was going to personally visit Brussels to hold talks with top officials of the European Union. Naturally, Johnson did not go to any Brussels, and he had already forgotten about the previous deadlines. Moreover, the negotiations have been in one place for a long time, and according to Michel Barnier, they are even moving in the opposite direction. It is also very symbolic that on the very day when it became known about the new deadline from Johnson, the media also got information about the possible refusal of London to fulfill some of the agreements previously negotiated with the EU. It all sounds like a pun, and hardly anyone else seriously believes that London wants to negotiate and will try to reach an agreement in the remaining six weeks. "We will have the freedom to make trade deals with all countries of the world and as a result, we will prosper," Boris Johnson said. However, Johnson did not say when this "period of prosperity" will begin. Maybe when all these deals will be concluded. However, the promise of a "period of prosperity" is very similar to Trump's formulation of a "Golden age" if he is re-elected. "If we can't reach an agreement by then, I don't think there will be a free trade agreement between us, and we should accept this and move on," the British Prime Minister commented on the current "progress" in the negotiations.

At the same time, European negotiator Michel Barnier asked his British counterpart David Frost to explain the information that London may refuse to comply with previously reached agreements. He said that "everything that was signed must be respected" and insisted on the full implementation of all agreements on the border between Northern Ireland and Ireland, from customs checks on which, according to rumors, London plans to abandon. In general, in the coming days, we can count on news from the UK, and the pound can now respond to each of them with a new fall. 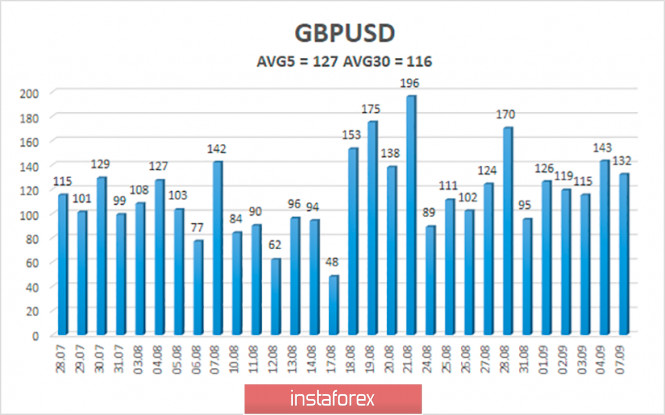 The average volatility of the GBP/USD pair is currently 127 points per day. For the pound/dollar pair, this value is "high". On Tuesday, September 8, therefore, we expect movement within the channel, limited by the levels of 1.3039 and 1.3293. A reversal of the Heiken Ashi indicator to the top will indicate a round of upward correction within a new downward trend.

The GBP/USD pair continues its downward movement on the 4-hour timeframe. Thus, today it is recommended to stay in short positions with the goals of 1.3123 and 1.3062 until the Heiken Ashi indicator turns upward, which will indicate a round of correction. It is recommended to trade the pair for an increase with the first targets of 1.3306 and 1.3367 if the price returns to the area above the moving average line.

Interesting? Write a comment below.
 #Overview of the GBP/USD pair. September 8. London is going to abandon part of the agreements with the EU concluded earlier.
Forward 
Backward 