Overview of the GBP/USD pair. September 9. The British pound fell again after a long break. 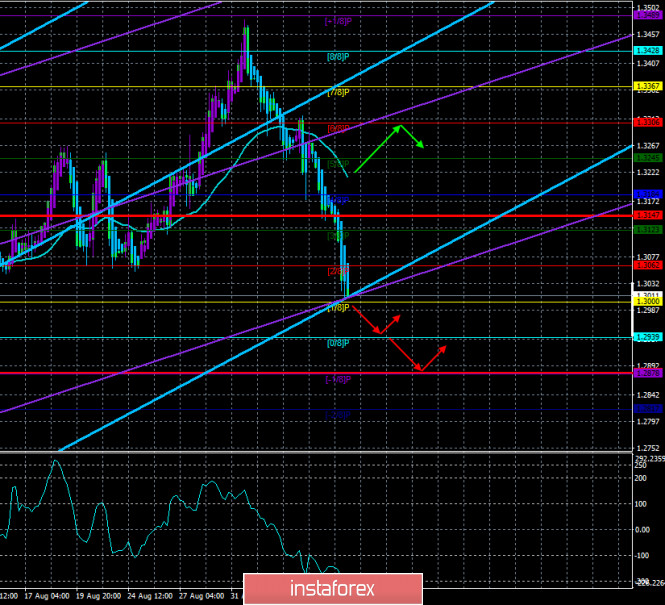 The British pound accelerated its fall against the US dollar on Tuesday, September 8. In simpler terms, it collapsed. However, we have been expecting this for a long time, since the British currency has not had any reason to strengthen in the past few months. Its growth is solely due to the United States with its fan of various crises and problems. Thus, the UK currency has grown undeservedly and now begins to slowly repay debts. This process did not start out of the blue. The events of the past week have clearly shown what was clear to many a year ago when Boris Johnson was just starting negotiations with the UK parliament and the European Union. Even then, Johnson clearly stated his position - to leave the European Union without any agreements, according to a "hard" scenario. He was ready to withdraw the country, bypassing the parliament, sending it on forced leave, as he understood that the deputies would not allow him to implement this option of "divorce" with the alliance. However, Johnson's plan failed like many others. Unfortunately for the UK itself, the British people are so tired of living in limbo that they simply gave most of the votes to the Conservative Party, hoping that Boris Johnson will quickly finish the "divorce" from the EU, which only 52% voted for in 2016. Moreover, that's exactly what Johnson has been doing for more than six months. At first, he flatly refused to extend the "transition period", during which there would be a much better chance of agreeing on free trade, and then began to put forward ultimatums to Brussels and conditions that no one in their right mind would accept. Naturally, the European Union did not accept them either. However, to reproach Johnson himself, there is nothing. He is only implementing the plan that he has honestly and publicly stated from the very beginning of his term as Prime Minister. Where Boris Johnson's policy might lead the UK is a completely different question. We see that in the last 4 years, the pound has regularly collapsed. Some may say that the pound has not fallen so much in total over 4 years, losing only about 13-14 cents. The absolute maximum of the pound was reached in 2007 when it cost 2.12 US dollars. The absolute minimum was reached in March of this year - 1.14 US dollars. Thus, even if you take a certain average value of the pound over the past 25 years, it turns out that it is somewhere around the level of 1.65. At the same time, the pound exchange rate is $ 1.30, and we see a clear approach to a new collapse.

Meanwhile, Boris Johnson royally granted time until October 15 to complete the negotiations. If the parties fail to reach an agreement before this date (and there is no doubt about this, since London initially did not intend to agree), then the negotiations will be completed. The fact that London was not going to conclude any agreement says a huge number of factors. We believe that 10 Downing Street understood from the very beginning that a comprehensive agreement would leave Britain tied to the EU. London will not get full and total independence, so this option was initially unacceptable. Further, London tried to bluff, threaten and issue ultimatums, trying to scare the European Union with the lack of a deal and at the same time pretend that London itself is completely ready for the option of no agreement and is not afraid of it at all. The goal of these maneuvers was to force the EU to be more accommodating in negotiations. However, the European Union, which loses disproportionately less from breaking all ties with Britain, did not follow Johnson's lead. Therefore, now Boris can only continue to pretend that the UK will live well without the European Union. Further, participants in the foreign exchange market have shown very well in recent years how much they believe in this.

In addition to the fact that London is not going to agree with the EU, it may well violate already concluded agreements, for example, on the procedure that will operate on the border between Northern Ireland and Ireland after Brexit. Recall that Northern Ireland will remain in the UK, and Ireland will remain in the EU. Thus, there must be a border, customs, and control between them. But how can this be explained to the Northern Irish and Irish themselves, who fought for 30 years before 1998 for various religious reasons, and who are one people? Under the agreement with the EU, all goods that are sent to Northern Ireland, whose capital will remain part of the EU's single market, must be checked and carefully monitored at the maritime border. However, the UK itself does not benefit from long checks and customs between Ireland and Northern Ireland, as this may provoke an increase in separatist sentiment and a new civil conflict. Therefore, London wants to soften any controls on the island of Ireland as much as possible, while keeping its face to the EU. However, Brussels has already expressed its complaints about the possible actions of London. The very fact that London is considering the option of unilaterally ending compliance with previously reached agreements will not only complicate the already failed negotiations but may also seriously affect the already difficult future relations between the Kingdom and the alliance. So far, everything goes to the fact that Britain will be in a state of conflict with the European Union for a long time. Moreover, Boris Johnson will play the role of Donald Trump.

As for the pound itself, it can be saved by Donald Trump and America. Because the worse things are in the US, the better it is for the British pound. Thus, buyers of the British currency can now only hope that things will get even worse in America. And this can easily be achieved by re-electing Donald Trump for a second term. It sounds funny, however, "the results are on the scoreboard". America is going through the worst crisis in 100 years. And this is the fault of Donald Trump. 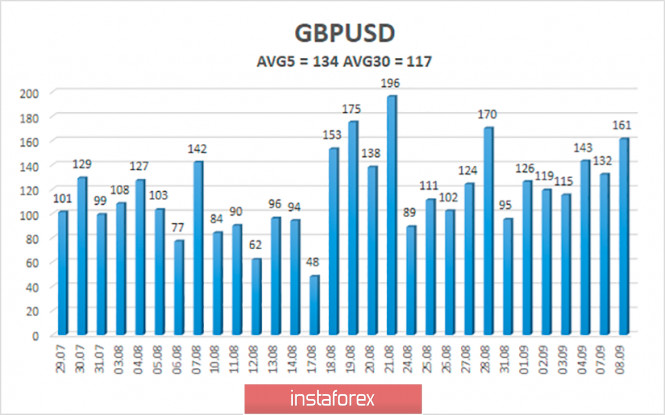 The average volatility of the GBP/USD pair is currently 134 points per day. For the pound/dollar pair, this value is "high". On Wednesday, September 9, therefore, we expect movement inside the channel, limited by the levels of 1.2879 and 1.3147. A reversal of the Heiken Ashi indicator to the top will indicate a round of upward correction within the new downward trend.

The GBP/USD pair continues its downward movement on the 4-hour timeframe. Thus, today it is recommended to stay in short positions with targets of 1.2939 and 1.2878 until the Heiken Ashi indicator turns upward, which indicates the beginning of a correction. It is recommended to trade the pair for an increase with the first target of 1.3306 if the price returns to the area above the moving average line, which is not expected in the near future.