The third consecutive trading session in the US stock markets ended with a decline and there is more reason to believe that the market is in a bearish turn. On the other hand, the real reason for the sales on Tuesday was the reaction to Trump's speech, in which he announced his intention to abandon the services of American companies that outsource their contracts to China. Stocks of technology companies were the first to react with a drop, but then all markets joined the sell-off.

Following the stock indices, oil also declined. Crude oil purchases from China have been slowing since July, Saudi Aramco slashed official selling prices for most grades of crude for the US, Asia and Northwest Europe over the weekend, and Fitch cut its long-term forecast for oil prices.

As a result, commodity currencies decreased and the demand for defensive assets increased. Today, sales are likely to continue, since there is no positive news yet capable of stopping a new wave. If panic will not cover the markets, then at least tension can be expected.

Today, the Bank of Canada will hold a meeting on monetary policy. Most experts do not expect any significant changes, which in general, should be viewed as a bullish factor for the Canadian currency amid a likely weakening of the Fed's position and, as a result of this weakening, a change in the yield spread.

At the same time, there are some factors that can play a negative role. The labor market report for August turned out to be worse than in the USA, and in case of a further decline in oil prices, a sale of risky assets is inevitable.

Technically, USDCAD's upward pullback was long expected, as the spot price on the wave of positive expectations went far down, breaking away from the fair price level. The CAD position on CME is bearish, the net short position is 2.067 billion, and there is a high probability of forming a base and continuing growth. 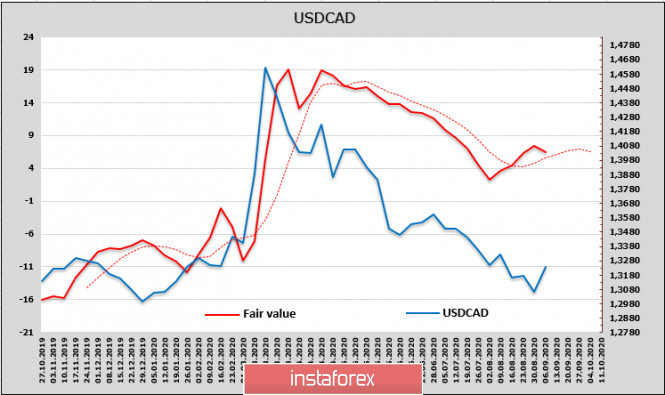 Yesterday, the USD/CAD pair moved above the trend line, which began its formation in March 2020. If today's trading closes above 1.32 after the meeting of the Bank of Canada, then the chances that a long-term bottom formed around 1.30 will increase significantly, and the probability of continued growth will increase. The nearest resistance is 1.3310/30, moving above this range will mean a bullish reversal.

In view of growing demand for defensive assets, yen's stability is doubtful again, since it is simultaneously undergoing both economic and political pressure.

The Cabinet of Ministers published the second preliminary estimate of GDP for Q2 (April - June) 2020. Japan's real GDP was revised downwards from -7.8% q / q (-27.8% y/y) in preliminary estimates to - 7.9% qoq (-28.1% y/y), with 3% of the fall due to external factors and 4.9% due to a drop in domestic demand. In other words, even a significant slowdown in world trade, which led to a fall in the global economy, was not as significant as the fall in domestic demand, which indicates the likelihood of a return to deflation in the very near future. 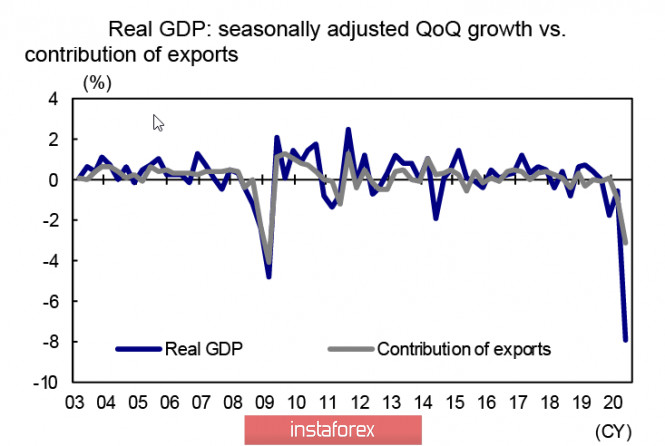 Japan will be entering a new era after Abe leaves, and the fight for the post of Prime Minister will begin. The opposition agrees that the consumption tax rate should be reduced to zero until inflation rises to 2%. But as deflationary pressures increase, the tax may remain at zero indefinitely. Such ideas indicate that the Japanese financial authorities are close to completely exhausting any opportunities to influence consumer demand.

The net long position on the yen increased by 718 million during the reporting period. It can be seen that the bullish advantage is clear, but the settlement price is still higher than the spot price, since just until yesterday, protective assets were under pressure. 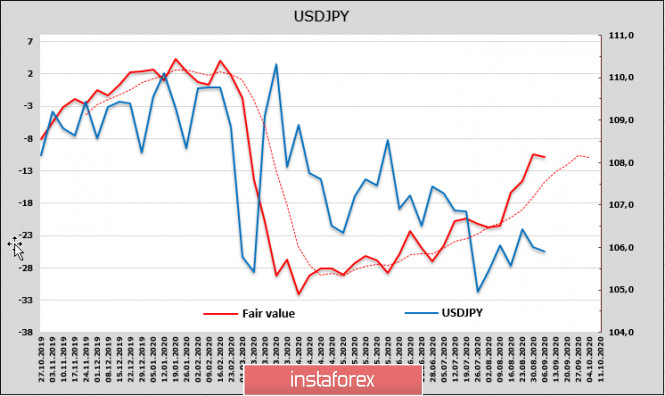 The yen gets a chance to strengthen before the threat of a panic wave, which will make the movement to the support of 105.10/20 more likely. If the sales take a collapse, the target will be the level of 103.