The Australian and New Zealand dollars hit two-year highs during the Asian trading session, while the US dollar continues to lose ground in all directions. On the other hand, commodity currencies are enjoying good market conditions, and their growth is taking place in view of stable oil, which probably means the start of a large repositioning of currency flows.

Richard Clarida, Fed's Deputy Head, also strengthened the dollar sell-off. He said that controlling the yield curve is not justified in the current conditions. If there were still any doubts after Powell's speech last week, it is now clear that the Fed is changing its approach to monetary management, which will affect the dollar negatively, since refusing to target the yield curve will mean lower returns for denominated assets in USD.

However, it is unclear what will be the result of the Fed's decision to change the position. But what's clear is that we should expect a further slowdown in the inflow of foreign capital, and the idea of repatriating capital should also be left out. Perhaps, the Fed is indirectly involved in the election campaign, since its position is more controlled by Democrats than Trump. The meeting on September 17 is likely to bring us many more surprises, but for now, we need to assume that the dollar will objectively continue to be under pressure, which will cause gold and possibly oil to rise.

On another note, the ISM Manufacturing Index will be published. Fed's member, Brainard is also expected to talk today. Therefore, volatility is likely to grow before this day ends.

The index of business optimism in New Zealand continues to be below the expansion line. It was -41.8 p in August, while the forecast of activity worsened against July from -17% to -17.5%. There is no V-shaped recovery and so, the trend is negative. 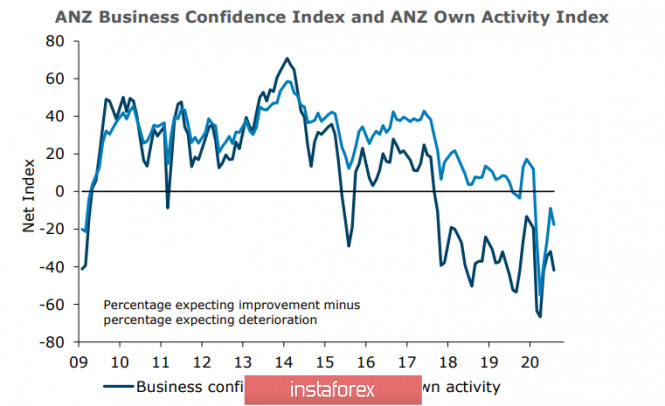 The speculative position on CME has changed insignificantly, however, the estimated fair price is still declining, which gives us reason to expect that the growing impulse is near completion. 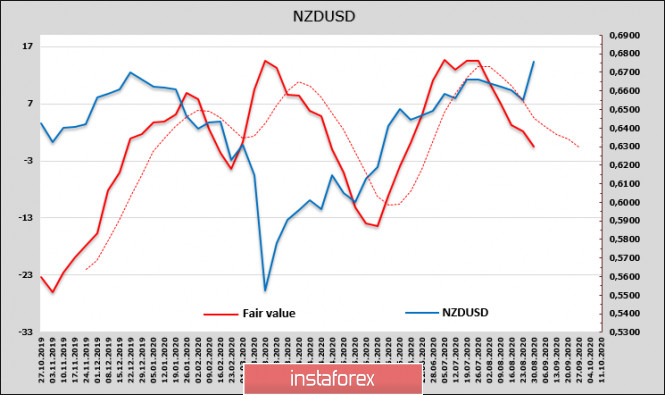 NZD is rising along with the market after J. Powell introduced a mechanism for targeting average inflation instead of the expected control over the yield curve, which the markets saw as a rejection of a strong dollar in the near future. This growth is logical, but in essence, the reasons for continued growth look very unstable.

ANZ Bank also updated its inflation forecast, suggesting that the RBNZ measures, which is expected to lower the rate below zero next year and expand quantitative easing, give reason to expect a stronger economic recovery and higher inflation by 2022. For the third quarter, the inflation forecast has been raised from 0.5% to 0.8%, with the result that annual inflation will remain at 1.5%. This is a positive sign for the "Kiwi" and allows counting on a higher rate, but at the same time, it lowers the yield against the US dollar, which, in turn, will not contribute to buying the NZD.

The NZD/USD rate approaches the resistance of 0.6788, which is also the upper limit of the current short-term channel. Thus, an attempt to break out is possible. If the NZD manages to go higher, the technical picture will become more bullish. At the same time, it is more likely that a top formation is near, followed by a downward reversal, since the estimated fair price continues to decline.

Australia's macroeconomic data looks mixed. Foreign trade is recovering, which is reflected in a strong growth in the balance of payments in the second quarter, while corporate profits rose to 15% against1.1% in the first quarter. There was also a noticeable growth in building permits. At the same time, the AiG Manufacturing Activity Index declined in August from 53.5p to 49.3p. 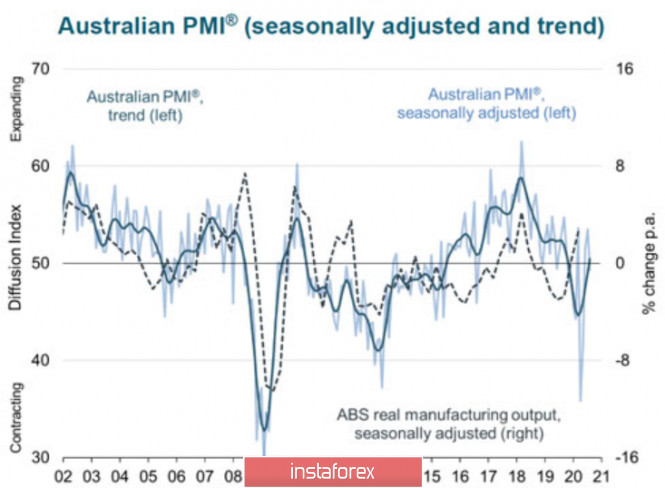 The growth of Commonwealth Bank manufacturing PMI also slowed down from 53.9 to 53.6 p, and there are no signs of a recovery in private sector lending, indicating strong consumer mood about the economic outlook.

The CFTC net short position on the AUD has slightly changed, so the target price continues to move downwards. 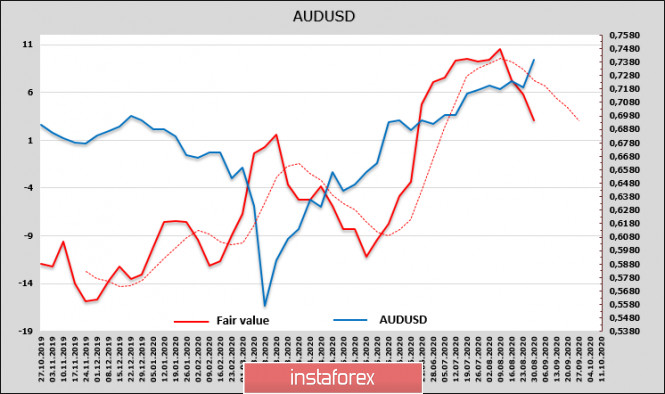 The growth of the AUD is due solely to the dollar's weakness in recent days. There are no strong resistances, the short-term impulse looks confident, and moving to the nearest resistance 0.7480/90 is reasonable. However, we should consider the current impulse weakly justified, since the fair price does not rise, and the current optimism still has a very weak basis for the rising probability of introducing repeated quarantine measures. Thus, the Australian dollar will form a local top in the near future.