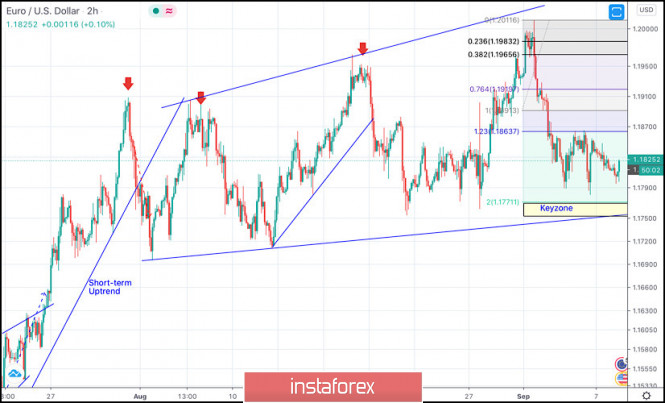 The EUR/USD pair has been moving sideways within the depicted expanding channel since August 3.

Previously, a temporary resistance level was formed around 1.1900 which prevented further upside movement for and forced the pair to have a downside pause for sometime.

On August 31, the EURUSD pair achieved another breakout above the previously mentioned resistance zone.

Significant SELLING pressure was applied around 1.2000 where the upper limit of the movement pattern came to meet the pair.

Recently, the EUR/USD pair has demonstrated a quick bearish decline towards 1.1800. More downside movement is expected towards the lower limit of the movement pattern around 1.1770-1.1750.

Any downside pullback towards this price zone around 1.1750 should be considered for a BUYING opportunity.

Initial target would be located around 1.1860 while Stop Loss should be placed just below 1.1720.