Technical Analysis of BTC/USD for September 29, 2020

A new study by cryptocurrency mining company Genesis Mining suggests that most US citizens are against the introduction of a central bank digital currency. A Genesis Mining study found that of the 400 participants, less than 25% agreed with the proposal that the government should ditch paper money in favor of the digital dollar, while more than half were against it.

However, the number of CBDC supporters almost doubled in 12 months, with only 13% of respondents in favor of the digital dollar when this question was asked in 2019.

While more than 85% of survey respondents expressed knowledge of crypto assets, many associate virtual currencies with criminal activity, possibly contributing to weak support for CBDC.

In August, the Bank of Canada released a study that found that financial literate respondents were half as likely to own cryptocurrencies than the general public.

The BTC/USD pair rally had been terminated at the minor supply zone located between the levels of $10,890 - $10,940 and the market reversed. Moreover, the price has broken the short-term trend line support around the level of $10,700 and made a local low at the level of $10,597 already. The momentum remains neutral, but it the bearish pressure intensify, the sell-off might continue towards the level of $10,586 and $10,430. 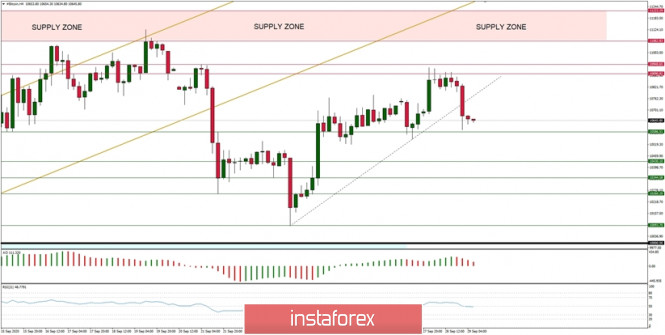