Last week, the European Central Bank (ECB) conducted operations that allowed the price to stay above the monthly minimum. The growth of the Euro was stopped at the significant resistance zone 1.1916-1.1893. Attempts to buy at these levels were absorbed by limit orders. Today's opening of European trading indicates the starting point for further work. Holding the price above yesterday's low will allow you to buy the instrument. The first target for growth will be the September high of 1.1916. 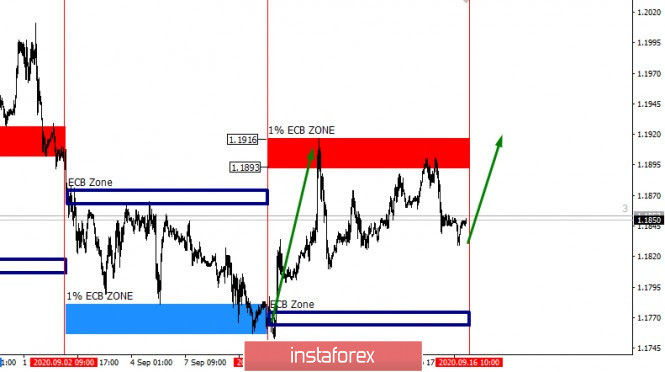 For further growth of the EUR/USD pair, it will be necessary to consolidate above the level of 1.1916. If this happens, the strengthening of the Euro-Dollar will be a priority for the whole of September.

The probability of continuing trading in the range that was formed due to the actions of the central bank is quite high so we should expect a reaction after updating the monthly maximum. It is possible to keep the price in the formed range for a long time. The option of weakening the European currency will be considered if today's closing of trading occurs below yesterday's minimum.

Interesting? Write a comment below.
 # Trading by the levels of the European Central Bank 16/09/2020
Forward 
Backward 