US budget deficit, ECB's results of the meeting, and new round of negotiations between the UK and the EU. Overview of USD,

While the markets are experiencing a decline in activity before the key Fed meeting on September 16-17, the US Congressional Budget Office publishes new data on the state of the budget, which could have caused an existential shock until recently, but are almost unnoticed today.

The US budget deficit grew by $ 198 billion and reached 3 trillion in 11 months of the current fiscal year in August. And by the end of the year, the deficit is expected to reach $ 3.3 trillion, or 16% of GDP. 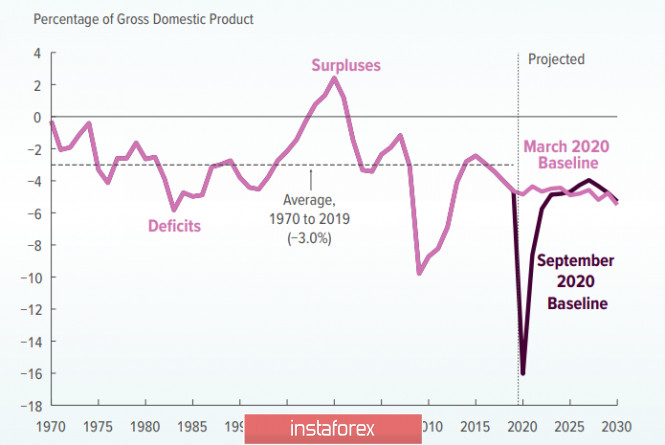 However, what is surprising is not that the deficit will go to the highest value in history, but it is predicted to return to current levels a and even to slightly improve compared to the March forecast after 2025. But it is not clear how the US economy will show such huge growth. Foreign borrowers own just a quarter of the government's debt, which percentage declines every year, and growing pressure on China threatens to bring down the entire system of external financing for American public debt.

On the other hand, recent labor market data indicate that unemployment is expected to resume growth. The growing pace of job losses calls for new stimulus measures, and Trump promises to push another $ 300 billion in aid through Congress. There are several options for the further development of events, all of them are radical and mutually exclusive in many ways. Therefore, the Fed's position and the results of the presidential elections will be decisive.

No new monetary policy measures were announced at the ECB meeting on Thursday, but the tone of the press conference was surprisingly optimistic. ECB's President, Lagarde, highlighted the apparent success of two ongoing programs - the COVID Pandemic Emergency Procurement (PEPP) program and the TLTRO long-term refinancing program. The GDP forecast for the current year has been revised upward, and inflation is also expected to rise by 2022, apparently in response to the positive impact of the recently created EU recovery fund.

The optimism comes from a simple premise: the ECB sees a supportive fiscal policy implemented at the government level, and if this is the case, there is no need for additional ECB measures.

In addition, there were no promises about taking any additional measures in the future during the press conference, and surprisingly, the high rate of the euro does not cause any concern.

Recently, the EUR/USD pair has been declining on the comments of ECB members, who have expressed concern about the growing euro. Now, the euro is likely to be able to resume growth, since the ECB has not indicated any constraining factors. At the same time, optimism looks somewhat pretentious. For example, the forecast for inflation is revised upwards, while the deflationary trend is clearly visible in August. 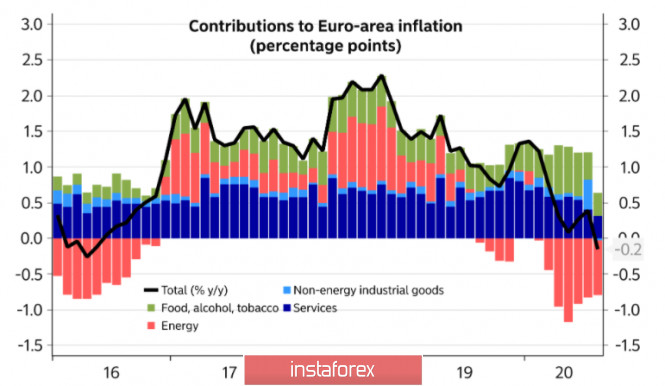 Despite the fact that the euro bulls may become more relieved after the ECB meeting, growth is still questionable. It is unlikely to leave the range until September 17, as the bond market reacted more than moderately to the ECB's optimism and long-term investor preferences have not changed.

Here, the EU issued an ultimatum, effectively requiring the UK government to withdraw the controversial bill by the end of the month or face legal action, after the UK published a bill to rewrite parts of the January withdrawal agreement. The European Commission said the UK has "seriously eroded confidence" and risks jeopardizing trade negotiations. Moreover, Cabinet Minister Michael Gove said the UK has no intention of backing down, saying that he has "made it very clear" to his EU counterpart that the UK government "cannot and will not" change the law.

Technically, the pound declined because it has no choice. At the moment, the markets proceed from the fact that the probability of a rate cut by the Bank of England to 0.1% has increased and the pound will continue to remain under pressure until there is at least some positive news.

In addition, it is stuck at the resistance level of 1.2809. A technical pullback to the 1.3030/50 zone is possible before a new downward wave. There is a low probability of renewed growth, so the medium-term target is a decline to the support level of 1.2620/40.

Interesting? Write a comment below.
 #US budget deficit, and new round of negotiations between the UK and the EU. Overview of USD, ECB's results of the meeting
Forward 
Backward 