US election fever: battling for the future of the dollar. Overview of USD, CAD, JPY

The pre-election fever in the US is still the major factor of uncertainty that does not allow us to build long-term forecasts. The main unstable factor is the position of both candidates, who made it clear that they would not recognize the election results if they were not in their favor. As a result, the confrontation between Republicans and Democrats will be further developed in Congress and the Supreme Court.

If Trump is trying to establish a Republican lead on the Supreme Court by introducing conservative Amy Barnett as his nominee, then in turn, the Democrats are preparing to take over both houses of Congress. Thus, the VIX index is growing. 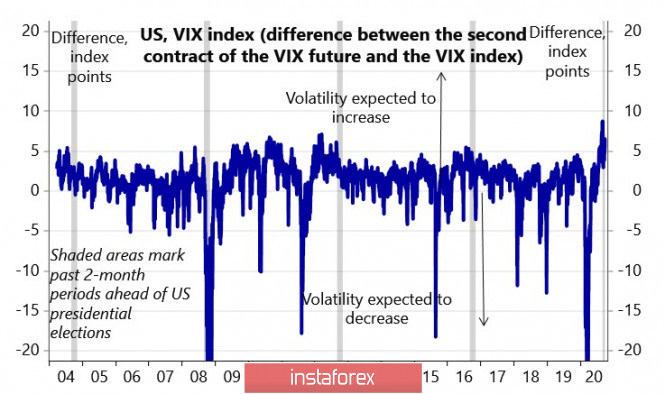 If Biden wins, markets view the possibility of large-scale QE and the resulting weakening of the dollar as high, but his tax policy raises big questions. In turn, Trump's victory may lead to a deep correction of the stock market, since its growth will no longer be politically necessary, and the strengthening of the dollar.

This morning, the dollar looks slightly stronger than its competitors in the short term. There is also a slight rise in demand for risk, which will give an advantage to commodity currencies.

Despite some growth in risk interest, the Canadian dollar did not benefit from this growth and was among the outsiders. It has no internal driver and remains hostage to the general market situation.

On the other hand, oil continues to consolidate near the level of $ 40 per barrel (for WTI). There is no support from the domestic macroeconomic data, both due to the lack of significant news, and due to the lack of positivity even in the data that was published.

The estimated fair price is inclined upwards which is not surprising – in the reporting week, the net short position of the CAD increased by another 134 million, reaching 1.419 billion. This is not a very strong advantage, but it reflects the trend well. There are no primary reasons for the growth of the Canadian currency without clear signs of a recovery in the US economy and in world trade. 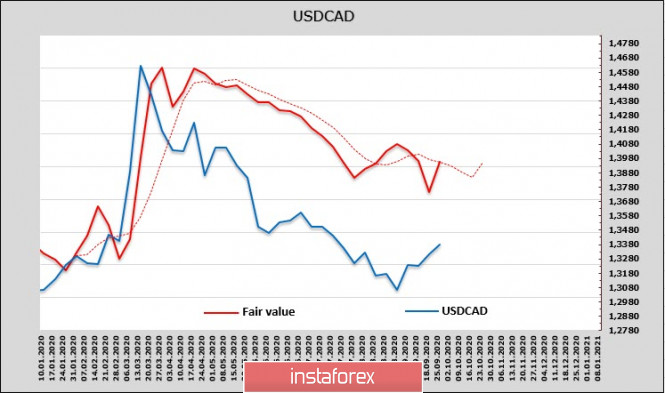 Technically, the USD/CAD pair was unable to break through the upper limit of the 1.3415 channel on the first attempt, but another attempt should be expected soon. The nearest base is 1.3340/60, which is the middle of the bullish channel. There is no technical reason to make a correction below, so growth is expected to resume with the nearest goal at 1.3450.

The threat of deflation and the weak pace of industrial recovery associated with a slowdown in external demand remain key challenges for both the Japanese economy and the country's financial authorities, who need to look for new ways to stimulate, even though the traditional ones have already been exhausted. 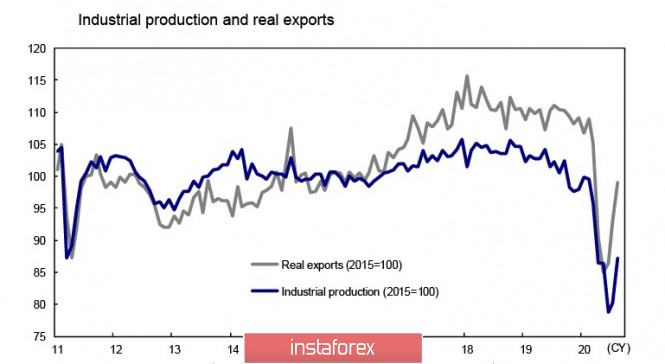 This morning, Tokyo's inflation data was released. The annual CPI slowed to 0.2%, against the forecasted 0.4%, and if we exclude food and electricity prices, inflation slowed to zero. Moreover, the consumer demand is declining, and there is no way to start reducing the budget deficit without its growth.

At the same time, JPY net long position rose by 810 million, reaching 3.524 billion. This is a clear advantage, which allows us to conclude that large speculators see the risks of strengthening the yen. The estimated price is below the long-term average and directed below, which confirms this conclusion. 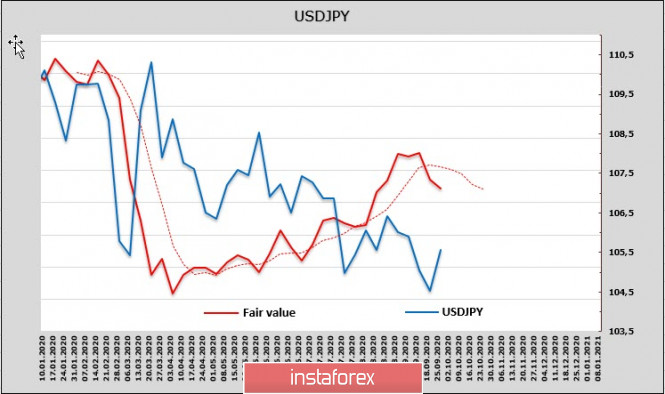 The dollar's growth last week should be considered corrective. A downward turn may begin in the area of the nearest resistance zone of 105.70/80, or if the demand for risk will dominate for some time, then from the 106.50/60 zone.

Today, the Central Bank of Japan will publish a brief summary of the Bank members' personal opinions following the meeting on September 16-17. It is important to see in the discussion whether the issue of expanding stimulus measures was discussed. If the minutes does not contain such instructions, then the chances of continued corrective growth in USD/JPY will be lowered and you will need to look for an opportunity to sell.

Interesting? Write a comment below.
 #US election fever: battling for the future of the dollar. Overview of USD, CAD, JPY
Forward 
Backward 