Who will win in the confrontation between D. Trump and the USD?

The US dollar has been experiencing an exceptional volatility recently. Its transition from falling to rapid increasing continues to amaze the markets. The position of the American President D. Trump, who seeks to weaken the dollar, contributed more to this.

Donald Trump's strategy changes from time to time: earlier, he was resentful about the strong dollar, but now, he is much more calm about this turn of events. In May of this year, he changed his previous rhetoric, supporting the strengthening of the US currency after criticizing its strength for years. The Head of the White House previously said that the strengthening of the USD damages the competitiveness of the United States.

He then continued this topic earlier this week, recalling that the US Treasury recently refused to adjust the dollar exchange rate to counter China's so-called currency manipulation of the yuan exchange rate. It can be recalled that Washington tried to call Beijing a currency manipulator last August 2019, but later decided not to rush to assign this status. Currently, D. Trump, explaining his position, said that he seeks to resist China's aggressive behavior in the global markets. The Central Bank of China disagrees with this opinion, denying accusations of the weakening of the yuan and the cheapening of its exports to the US.

In view of this, the US currency has the main role in the current situation. In the wake of the sale of securities and a total reduction in risks, the DXY dollar index, showing its value against a basket of six key currencies, rose to 93.81. Analysts said that this is the highest figure in the past six weeks. 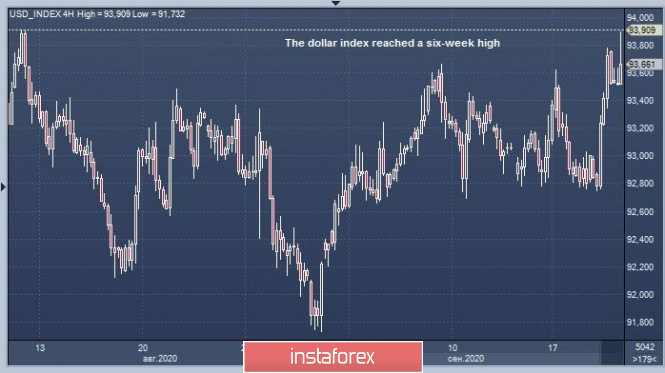 The decline in the US and global stock indices, as well as commodity currencies and metals is supporting the strengthening of the US currency. Yesterday, it continued to rise, despite the growth in European stock indices. It can be recalled that an inverse correlation has been established between US stock indices and dollars in the past few months. The collapse of these indices strengthens the USD as a defensive asset. Today, the EUR/USD pair also shows miracles of falling, trading near 1.1682-1.1683. This pair's extremely low levels plunge the market into despair, although there is still hope for a rise.

But experts consider the downward trend of the EUR/USD pair to be temporary, expecting its growth in the near future. The collapse also affected risky currencies such as the Australian dollar, which fell 0.5% to 0.7185, while the New Zealand dollar fell 0.4%, to 0.6643. The negative background for most of them is due to the introduction of new quarantine measures necessary to fight the second wave of COVID-19. However, experts warn that a further increase in current risks threatens the active recovery of the global economy.

Experts are sure that there will be no winners or losers in the confrontation between D. Trump and the US dollar. In case that there will be a bias in USD dynamics, both the world economy and the US economy will suffer. In this regard, the US President will have to be cautious with his actions and carefully weigh his statements regarding the dollar.

Interesting? Write a comment below.
 #Who will win in the confrontation between D. Trump and the USD?
Forward 
Backward 