As usual, on Mondays, we will summarize the results of the five-day trading period and consider the prospects for the price movement of the main currency pair of the Forex market.

So, at the auction on October 19-23, the US dollar was under selling pressure and weakened against all major competitors. In particular, the single European currency showed a strengthening of 1.26%, as a result, there were some changes in the technical picture for the euro/dollar, which we will return to later. In the meantime, let's talk about what dictated the last week's trading, and about the main events of this week that can affect the price dynamics of EUR/USD.

In the run-up to the US presidential election on November 3, investors are very concerned about whether the White House administration will be able to agree with Democrats in the House of Representatives on the adoption of a new fiscal stimulus package just before the election. The new program of assistance to the world's leading economy should and will be adopted, however, when exactly this will happen is still shrouded in mystery. Let me remind you that the main contradictions between the parties are the size of the new aid package. Democrats are demanding more stimulus than their Republican opponents are offering. Another important reminder is the fact that in the United States, the first outbreak of the COVID-19 pandemic began somewhat later than in European countries, and since Europe is covering (or has already covered) the second wave of coronavirus, it will inevitably reach the United States. This is a matter of time, but about 2-3 weeks. Meanwhile, the first and second European economies, German and French, respectively, as a result of the invasion of the second wave of COVID-19, risk incurring significant losses that will negate the recovery that was started.

Now about the most important and main events, which without any doubt are the election of the President of the United States of America. Let me remind you that Joe Biden is leading the race, and the current President Trump will have to make incredible efforts to change the situation. Most market participants believe that a Biden victory will significantly increase risk appetite in global financial markets, which means that it will weaken the US dollar. However, the US election will be held next week, and this week the main event will be the decision of the European Central Bank (ECB) on interest rates and the subsequent press conference of ECB President Christine Lagarde. Since the ECB is likely to keep the main interest rate at zero, the main attention of market participants will be focused on the speech of the head of the European Central Bank. Now it's time to look at the technical picture for EUR/USD. 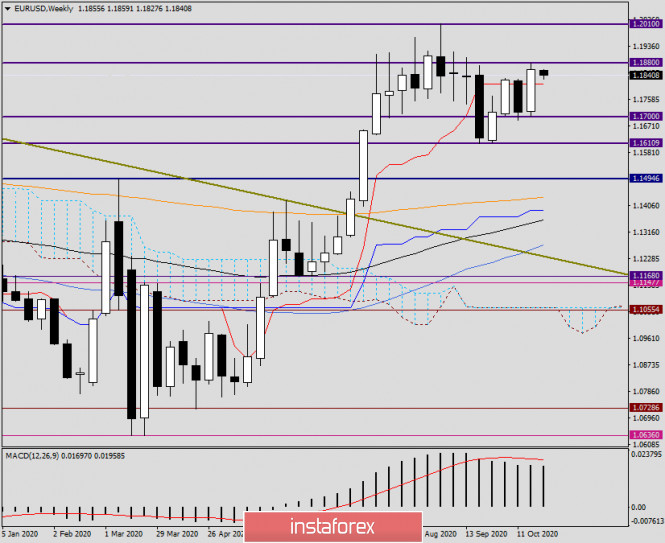 As a result of the rather impressive growth, the euro bulls managed to break through the strong resistance of sellers at 1.1830 and end the weekly session above this mark. The red line of the Tenkan indicator Ichimoku was also confidently passed up. As you can see, at the auction of the previous two weeks, it was the level of 1.1830 and Tenkan that did not allow the quote to go higher. However, at this point, the problems for players to increase can not be considered solved. A very important test is waiting for them in the price zone of 1.1880-1.1917, where there is a fairly strong resistance of sellers, which can be judged by the long upper shadows of several candles and the previous inability to overcome the designated area. I believe that only a true breakout of 1.1917 with the week closing above this level will open the way to 1.1965, and then to the significant psychological level of 1.2000 and the August highs on 1.2010. As has been noted many times, the bearish scenario will gain chances for its implementation only after a true breakdown of the key support level of 1.1700. Judging by the weekly timeframe, I am more inclined to expect the continuation of the upward trend. 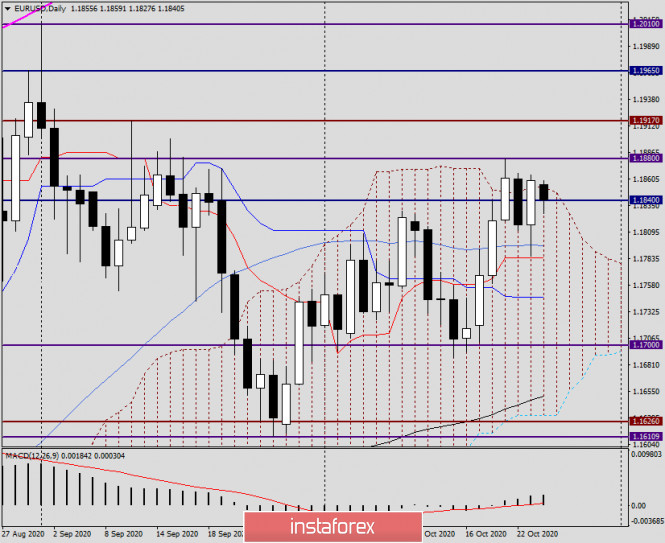 The daily chart clearly shows the hard struggle for the pair to exit the Ichimoku indicator cloud. Once again, I would like to draw your attention to the fact that a single candle that closes above the upper border of the cloud is not enough to consider the exit from it as true. Friday's attempts by the bears to continue the pressure on the pair ended at 1.1786, from where the pair began an active recovery and ended trading on October 23 at 1.1859.

Judging by the technical picture on the two timeframes considered, the main trading recommendation will be considered purchases that are best opened at lower prices. As an option, I recommend considering opening long positions on EUR/USD after a corrective pullback to the price zone of 1.1840-1.1825. In tomorrow's article, we'll take a closer look at the four-hour and one-hour charts.