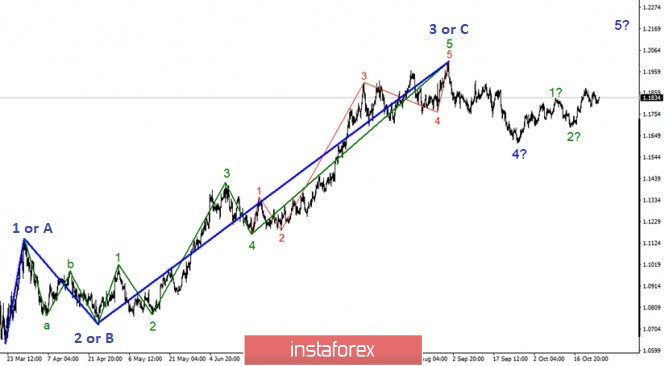 The wave marking of the EUR/USD instrument still looks quite convincing and has not changed recently. I still expect to build wave 5 of the upward section of the trend, which dates back to March. At the moment, waves 1 and 2 are viewed inside this wave. If the current wave markup is correct, then the price increase will continue from the current values with targets located near the peak of wave 3 or C. So far, there are no prerequisites for revising the current wave pattern. 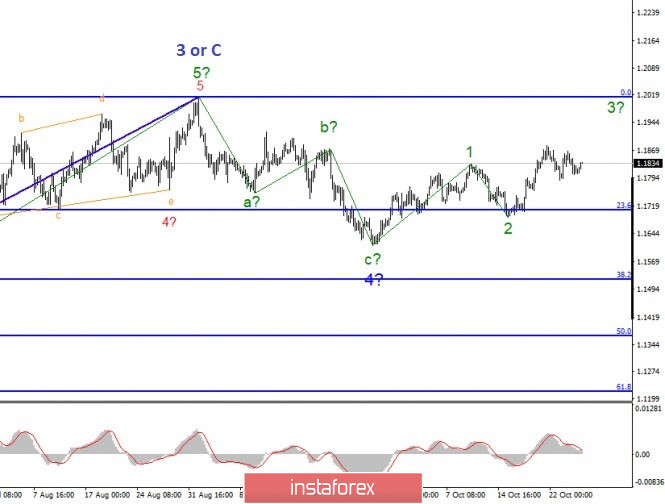 Despite the fact that the markets have been quite calm lately, things are approaching the most significant day in the second half of a completely crazy 2020. The topic of presidential elections in the United States has been the talk for several months in a row. However, now there is nothing to write or talk about this topic. Both candidates did everything they could in the fight for election ratings and most Americans have already decided on the candidate they will vote for. Moreover, more than 60 million Americans have already voted, including Donald Trump himself. All statistics now indicate that the current elections will be one of the largest not only in recent decades, but also since 1908. Forecasts suggest that more than 65% of Americans may vote this year, which are 150 million people. Experts have recently become more and more afraid that the scenario of 2016 will not be repeated, when Trump also, according to all pre-election opinion polls and ratings, was behind Hillary Clinton but won in the end. Now it's hard to even imagine what must happen for Trump to win. However, there is no doubt that he has a few tricks up his sleeve. Thus, the markets can only stock up and closely monitor events in the next week or two. Today, you can also pay attention to the report on orders for long-term goods in the United States but it seems that the markets are already fully focused on the presidential election and do not want to pay attention to other news.

The Euro-Dollar pair is expected to continue building a 3-in-5 wave. Thus, at this time, I still recommend buying with targets located near the estimated 1.2012 mark (which corresponds to 0.0% Fibonacci) for each MACD signal up, in the expectation of building an upward wave. The variant with a possible complication of the internal wave structure of wave 4 has not yet been confirmed.

Interesting? Write a comment below.
 # Analysis on EUR/USD on 27/10/2020: Interest in the US presidential election is the highest since 1908
Forward 
Backward 