Analytics and trading signals for beginners. How to trade the GBP/USD currency pair on October 26? Analysis of Friday's deals.

The hourly chart of the GBP/USD pair. 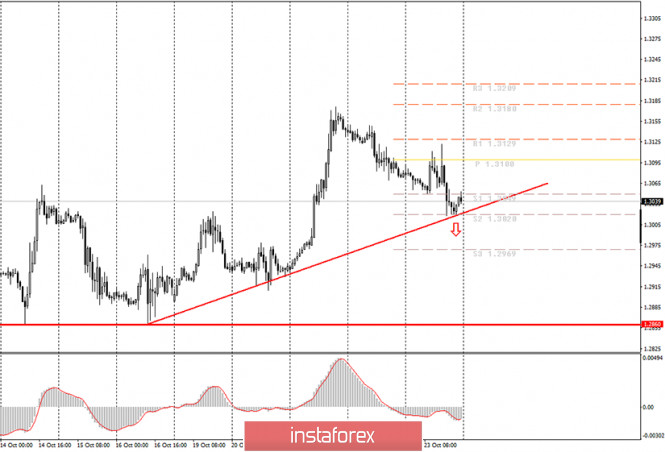 For the GBP/USD currency pair, trading during the last trading day of the week was quite difficult. However, by the end of Friday, the price still worked out an upward trend line, which is not strong and clear. However, a rebound from it can provoke a new upward movement. Moreover, the formal upward trend continues. But if this trend line is overcome, then the trend will change to a downward one and short positions will become relevant. Thus, on Monday, novice traders are advised to be very careful. We have repeatedly said that we are leaning towards the option with a downward movement of the pair since the pound sterling looks much weaker than the US dollar. However, until specific technical signals appear, this is just a hypothesis.

The fundamental background for the British currency remains an extremely important factor. Just today, it became known about some "progress" that seems to have been made in the negotiations on a trade agreement between Brussels and London. It is not known what specific progress or issues are being discussed. Sources are insider, so the information itself is rather unconfirmed. However, on Monday, this information may help the British currency resume its upward movement. Novice traders should know that in recent years, the pound is very fond of reacting to various kinds of rumors related to the positive and imminent outcome of Brexit, as well as the positive result of negotiations between the UK and the European Union regarding a trade deal. Thus, this time, with the opening of the foreign exchange market, traders can again rush to buy the pound, especially since this is justified from a technical point of view. Therefore, you need to be prepared for this scenario on Monday. As for the usual macroeconomic statistics, nothing is planned for Monday either in America or the UK. Throughout the trading week in America, there will be several important reports that can cause a market reaction, however, we also encourage you to remember the US presidential election, which will be held next Tuesday. Voting has already begun and is continuing. We also do not forget that in the next week or two, negotiations on the deal may end, so there may be a large amount of various and important information regarding the pound sterling.

On October 26, the following scenarios are possible:

1) We still recommend buying the pound/dollar pair, since the upward trend is still maintained. However, we do not recommend that novice traders do this with large lots, since the upward trend may well be canceled in the near future. However, an eloquent price rebound from the trend line will allow you to open buy orders with targets at the levels of 1.3100 and 1.3129.

2) Sales, from our point of view, are now much more appropriate, however, you should not rush to open them until the price is fixed below the ascending trend line. in this case, the targets will be the support level of 1.2969 and 1.2860. The dollar is now extremely difficult to get more expensive, however, the fundamental background for the British pound is "no sugar". If the information about the progress in negotiations with the EU is confirmed, then you can count on the growth of the pound.

Price support and resistance levels – target levels when opening purchases or sales. You can place Take Profit levels near them.

Up/down arrows – show when you reach or overcome any obstacles to trade for a rise or fall.

MACD indicator – a histogram and a signal line, the intersection of which is a signal to enter the market. It is recommended to use it in combination with trend lines (channels, trend lines).

Interesting? Write a comment below.
 #Analytics and trading signals for beginners. How to trade the GBP/USD currency pair on October 26? Analysis of Friday's deals.
Forward 
Backward 