Analytics and trading signals for beginners. How to trade EUR/USD on October 16? Plan for opening and closing trades on Friday 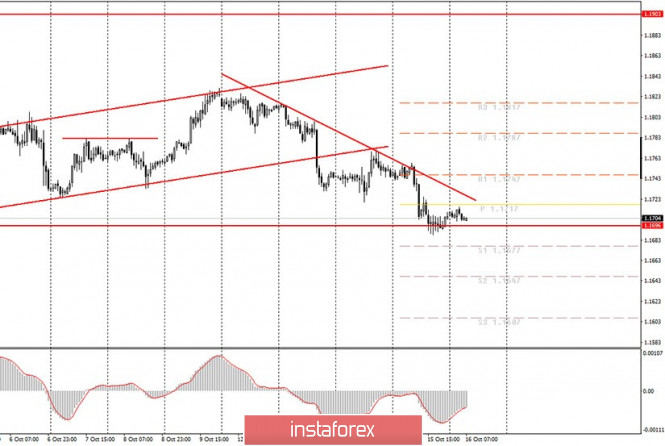 The EUR/USD pair failed to overcome the 1.1696 level last Thursday night, which served as the lower border of the horizontal channel for a long time. Thus, at the moment, we can conclude that there was a rebound and a correction began. That's exactly what we need. As long as the price is below the trend line, the downward trend is maintained. Therefore, we need a round of correction so that the MACD indicator discharges to the zero level, afterwards we can expect a sell signal to appear. Also, as a sell signal, you can consider that the price could rebound from the trend line, which already has four reference points. However, take note that in the near future it will be difficult for the MACD indicator to turn down if the downward movement resumes. The correction is too weak and the indicator failed to even approach the zero level. On the other hand, if the downward trend line is overcome, then novice traders can consider long options on the foreign exchange market.

The fundamental background for the EUR/USD pair remains unchanged. The consumer price index (inflation) will be released in the European Union today, which we consider the most significant report of the day. The headline inflation is expected to remain at -0.3% y/y, while core inflation is expected to rise to 0.2% y/y. If today's results do not exceed forecasts, then the euro will not receive support due to such values. Deflation has a very negative effect on the economic growth of any country. And the European economy is now recovering from the coronavirus crisis, and is just entering the stage of the second wave of the epidemic. Therefore, anything that can stop economic growth only adds to the headaches of the European Central Bank and the EU government. A relatively important retail sales report will be released in America. However, forecasts for this indicator are as neutral as possible. The same goes for the US industrial production report. We believe that traders will not react to such US reports or reaction would be minimal. Based on this, we continue to recommend that traders pay more attention to technical factors. As for the general fundamental background, such as the elections in America or the new aid package for the US economy, there is no new information on them. Consequently, market participants have nothing to react to.

1) Buy positions on the EUR/USD pair have ceased to be relevant at the moment, since the pair left the ascending channel. However, if the price settles above the new trendline, then novice traders can try to open long positions while aiming for resistance levels of 1.1747 and 1.1787, since a new round of upward movement will most likely begin in this case. Especially if the 1.1696 level remains unbroken.

2) Sell positions are still relevant at the moment. However, traders failed to overcome the 1.1696 level on their first attempt. Therefore, we recommend opening new sell orders if the 1.1696 level is overcome or after a new round of correction to the trend line, afterwards the MACD indicator will form a sell signal. The targets will be the support levels 1.1677 and 1.1647. The ultimate goal is 1.1607.

Interesting? Write a comment below.
 #Analytics and trading signals for beginners. How to trade EUR/USD on October 16? Plan for opening and closing trades on Friday
Forward 
Backward 