Analytics and trading signals for beginners. How to trade EUR/USD on October 23? Plan for opening and closing trades on Friday 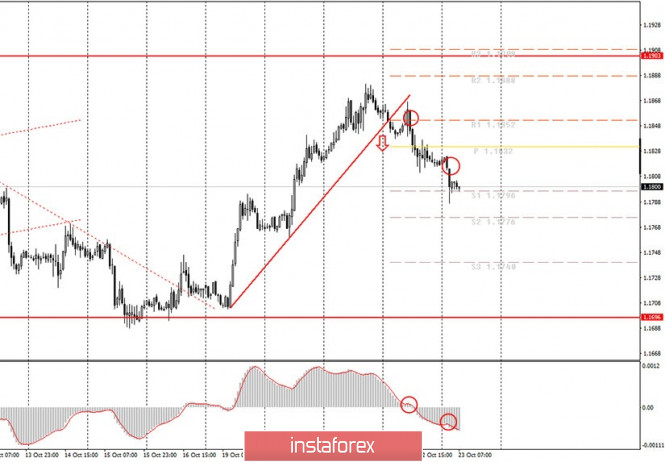 The EUR/USD pair continued to move down last Thursday night after the quotes settled below the upward trend line. Over the past day, novice traders received two sell signals at their disposal, and our fears that the upward movement would resume and the trend line would have to be rebuilt did not come true. The pair, as we warned, fell to the 1.1900 level, which was the upper line of the horizontal channel for a long time and also seems to be a strong resistance. Thus, the quotes of the pair remain in the same horizontal channel of 1.17-1.19. At first they fought off its lower border, now they turned around near the upper one. This means that flat remains in the long term. Let's go back to signals. The first signal could and should have been reached, since the MACD indicator moved near the zero level, as it should be. Traders could get around 30 points of profit on this signal. The second sell signal was weaker, since it was not preceded by a correction round, and the MACD indicator failed to discharge normally. Moreover, the euro fell and it happened on this night, that is, at a time when most of the market participants are still sleeping. Thus, the second signal did not need to be processed. Now, since the trend has changed to a downward one, you need to wait for a new sell signal from MACD and, accordingly, a correction round.

The fundamental background for the EUR/USD pair was completely empty yesterday. The only macroeconomic report - claims for unemployment benefits - turned out to be in favor of the US dollar, as it showed a rather noticeable decrease in their total number. This means that the unemployment rate continues to decline in America. However, this report did not affect the course of trading in any way, and no other statistics were published that day. Also, there were no important speeches from the European Union and the United States. But that night, the last round of televised debates between Donald Trump and Joseph Biden took place and as a result, the quotes fell by 30 points. However, the fall did not last long, which means that there was nothing extraordinary in the debate. The European Union and Germany will release business activity indices in the manufacturing and services sectors on Friday, October 23. According to experts, all indicators may deteriorate in October, which is not surprising, given the scale of the second wave of the coronavirus epidemic in the EU. If forecasts come true, then the US dollar may rise by several dozen points. Similar indexes of business activity will be published today in America. We are still leaning towards the correctional scenario for Friday. Although, in general, we expect the quotes to fall to the lower border of the horizontal channel at 1.1700.

1) Buy positions on the EUR/USD pair have ceased to be relevant at the moment, since the price has settled below the rising trend line. Thus, novice traders are advised to resume bull trading after forming a new upward trend or the refraction of a downward trend, which is not expected during the day.

2) Novice traders are advised to continue trading down, but now it is necessary that the pair slightly correct and the MACD indicator is discharged. After doing so we can finally recommend waiting for a new sell signal from MACD and then you can open short positions while aiming for 1.1776 and 1.1740. The price correction may take some time.

Interesting? Write a comment below.
 #Analytics and trading signals for beginners. How to trade EUR/USD on October 23? Plan for opening and closing trades on Friday
Forward 
Backward 