Analytics and trading signals for beginners. How to trade the EUR/USD currency pair on October 26? Analysis of Friday's deals. 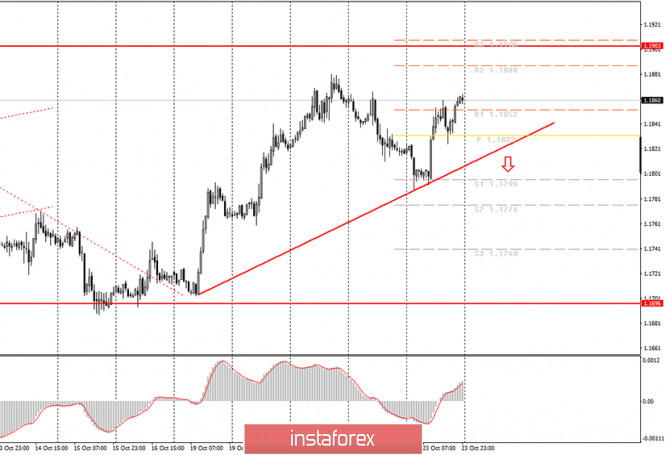 On Friday, October 23, the EUR/USD currency pair quite unexpectedly did not resume its downward movement, although everything was going exactly to this. However, at the very last moment, the pair's quotes turned up and resumed their upward movement. Thus, what we were worried about a couple of days ago happened. The upward trend line had to be rebuilt, as at the moment everything is going to ensure that the upward trend will continue. At the same time, we remind novice traders that the price continues to be inside the side channel, limited to the level of 1.1700 and 1.1900. Thus, in the upper area of this side-channel (where the price is currently located), there is a high probability of ending the upward trend. At the moment, we do not see how the pair can overcome this level and go significantly higher than it. Thus, it is likely that the downward movement back to the trend line will resume on Monday. As before, overcoming this line signals a change in the trend to a downward one. On Friday, we recommended that novice traders open short positions if the MACD indicator turns down. However, this did not happen, so there was no need to open transactions.

On Monday, the European Union and America will not have any important macroeconomic reports or speeches. Thus, traders will again have to consider only technical factors, which are also not very clear at the moment. However, we can not say that the fundamental background is now absent in principle. Recall that in a week, on Tuesday, November 3, elections will be held in America that will determine the name of the next president. The election has already begun, as early voting is practiced in the United States. The media notes queues at polling stations, which indicates a high level of civic responsibility among Americans. It is reported that about 50 million citizens have already voted. Why is this so important? In the fundamental articles, we have already said that the name of the president is not just the name of the person who will lead the country. It will determine the domestic and foreign policy of the state with the strongest economy in the world. Donald Trump, for example, showed the world that a lot can depend on the president's name. And the consequences of the rule of one or another president can be "felt" by the country for many years to come. Thus, although the election theme does not have a daily impact on the US dollar, however, novice traders should remember that it is there and be prepared for different options for the movement of each pair in which the US dollar is present.

On October 26, the following scenarios are possible:

1) Purchases of the EUR/USD pair have become relevant again at the moment, as the upward trend line has been rebuilt and now again supports traders who are trading for an increase. However, on Friday, the pair made a significant jump up, so now the price should correct before presumably continuing to move up. Therefore, we recommend waiting for the downward correction and its completion before opening new purchases with targets of 1.1888 and 1.1903.

2) It is not recommended to trade lower at this time, as the upward trend line is in action again. Thus, to be able to sell the pair, novice traders need to wait again for the price to consolidate below the trend line. In this case, sales will become relevant with targets of 1.1776 and 1.1740.

Price support and resistance levels – target levels when opening purchases or sales. You can place Take Profit levels near them.

Up/down arrows – show when you reach or overcome any obstacles to trade for a rise or fall.

MACD indicator(14,22,3) – a histogram and a signal line, the intersection of which is a signal to enter the market. It is recommended to use it in combination with trend lines (channels, trend lines).

Interesting? Write a comment below.
 #Analytics and trading signals for beginners. How to trade the EUR/USD currency pair on October 26? Analysis of Friday's deals.
Forward 
Backward 