Analytics and trading signals for beginners. How to trade EUR/USD on October 5? Plan for opening and closing trades on Monday 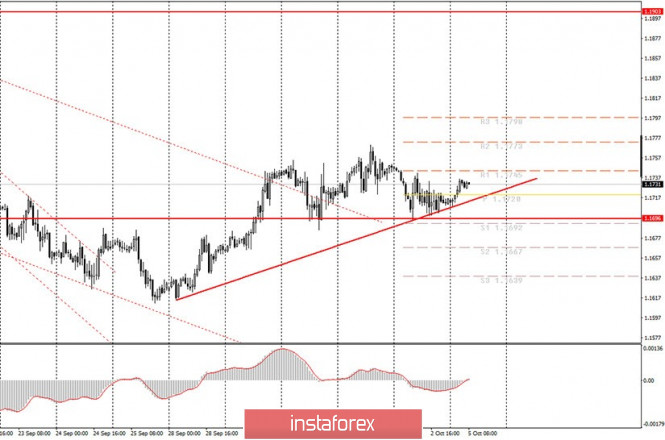 The EUR/USD pair began a new round of upward movement last Friday night. However, this round was only 25 points, which does not necessarily convince us that the upward trend is resuming. Nevertheless, the pair was moving up, not down, so we, as we mentioned earlier, we adjusted the upward trend line for new realities. Now this line supports bull traders. The upward movement is also supported by the fact that the price failed to gain a foothold below the 1.1696 level, which acted as the lower border of the horizontal channel of $1.17-1.19 for a long time. The EUR/USD pair has already rebounded off this level several times, so the downward movement could not gain momentum. In general, the technical picture for the pair remains rather complex and ambiguous. Novice traders are still advised to be very careful or not trade at all, as we wait for a more favorable situation.

The fundamental background for the dollar remains rather complex and has not changed in recent days. Therefore, the US currency seems to be reluctant to grow, and traders are also very reluctant to buy it. The most inconvenient thing about this is that market participants continue to ignore almost all macroeconomic data. We have already said that quite important reports on inflation in the European Union and NonFarm Payrolls in the United States were ignored on Friday. Usually these reports provoke quite a strong market reaction, but this was the case before the pandemic and the crisis caused by it. We can take note of the following reports on Monday: the business activity indices for the service sectors of countries of the eurozone, the European Union as a whole and the United States. However, it is very unlikely for the market to pay attention to these data. The same goes for retail sales in the eurozone in August. We believe that only the ISM report in the US services sector can affect the market today, and even then only if its real value turns out to be much worse than the forecast. But we recommend that novice traders continue to monitor the US news feeds. We might receive more news from America that could affect the pair's movement. Starting from the illness of US President Donald Trump, ending with information about elections or negotiations between Democrats and Republicans concerning a new aid package for the American economy.

1) Buy positions on the EUR/USD pair have become relevant again at the moment, since we rebuilt the ascending trend line, and the price failed to gain a foothold below the 1.1696 level. Thus, we advise beginners to trade upward while aiming for the resistance levels of 1.1745 and 1.1773. As before, a downward reversal of the MACD indicator will indicate the end of the upward movement and the need to close long positions.

2) Sell positions may become relevant again if the pair settles below the trend line. However, we believe that it is better to wait until the price settles below the 1.1696 level and only after that should you consider the possibility of opening sell orders in the current situation. Take note that the dollar is very reluctant to rise in price, and the fundamental background is not in its favor.

Interesting? Write a comment below.
 #Analytics and trading signals for beginners. How to trade EUR/USD on October 5? Plan for opening and closing trades on Monday
Forward 
Backward 