The Australian dollar paired with the US currency has been trading in a fairly narrow price range since last Thursday. The Aussie is not leaving the 50-point corridor, which is limited to 0.7100-0.7150. Bears avoid entering the 70th figure (and even more so to test the key support level of 0.7000), while buyers fail to develop a northern offensive, due to numerous fundamental factors of a negative nature. At the same time, the pair is dominated by bearish sentiment—at least because of the "dovish" intentions of the Reserve Bank of Australia, which is likely to lower the interest rate at the November meeting. But the very fact of monetary policy easing, AUD/USD traders have already won back, falling by 250 points – from 0.7245 to the base of the 70th figure. After the correction, the pair floated within the above-mentioned price range, waiting for the next information driver.

This driver may be tomorrow's release on the growth of Australian inflation. Recall that, earlier this month, the head of the RBA stated that the interest rate could be reduced by 15 basis points. However, according to the RBA meeting minutes that was published last week, members of the regulator allow the option of reducing the interest rate by 25 points, that is, to zero, while increasing the volume of bonds being bought. 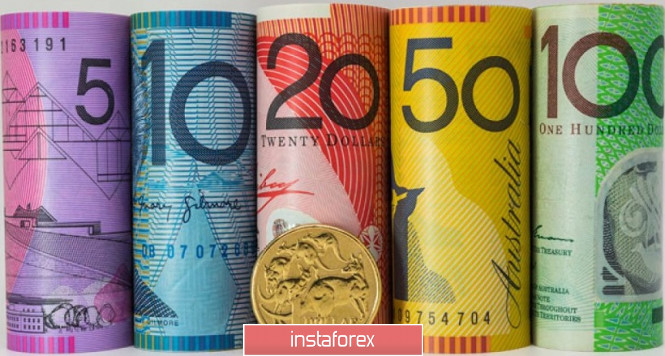 To put it simply, the very fact of a rate cut has already been factored into prices, but the open question is exactly how much the RBA will cut it. In this context, tomorrow's inflation data may cause increased volatility, especially if they are in the "red zone." In the run-up to the release, it is also worth recalling another important point made at the October meeting. The members of the regulator have now decided to pay more attention to actual, rather than projected, inflation when making decisions. At the last meeting, the Australian Central Bank operated with very outdated data for the second quarter, which updated the multi-month anti-records. Thus, the consumer price index in quarterly terms for the first time since the spring of 2016 collapsed into a negative area, not to the forecast -2%, but to -1.9%. In annual terms, the indicator was also below zero: the indicator came out at -0.3%.

Since inflation in Australia remains a "weak link," the above thesis, voiced at the October meeting, is of particular importance for AUD/USD traders. And if tomorrow's release also turns out to be worse than expected, the bears of the pair will get a reason for a southern breakout.

Despite this, most experts are optimistic. According to preliminary forecasts, the overall consumer price index in the third quarter should come out of the negative area—both on an annual and quarterly basis. It is expected that the indicator will grow to 0.7% in annual terms, and to 1.5% in quarterly terms. According to the RBA (using the truncated average method), the core inflation index should also show positive dynamics, reflecting the recovery processes.

If the above figures come out in the "red zone," the market is likely to resume talks that the Australian regulator may resort to a more extensive easing of monetary policy parameters.

The current correction of the AUD/USD pair is becasue of two factors. First, no new cases of coronavirus have been detected in the Australian 5-million-strong metropolis of Melbourne. Because of this fact, curfews are being lifted and quarantine restrictions are almost completely relaxed. Starting today, all shops, restaurants, cafes, and bars in the country's second most populous city will be able to work again.

Furthermore, the Australian dollar was supported today by Reserve Bank of Australia representative Guy Debelle, who spoke in the country's Parliament during the Asian session on Tuesday. He was surprisingly optimistic about the prospects for the Australian economy to recover in the third quarter. Debelle said that reducing the unemployment rate below the 6 percent mark is a "reasonable goal" that is quite achievable in the foreseeable future. In spite of the fact that his phrases were general, he was able to provide little support for the Australian dollar. The representative did not talk about the RBA's plans to ease monetary policy. According to him, this issue will be discussed at the November meeting, ergo making any announcements in this context is incorrect. 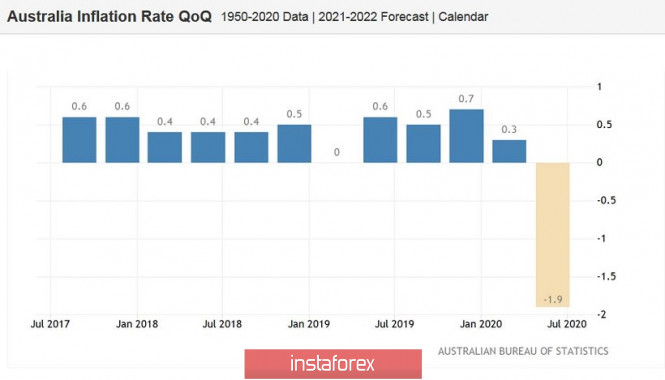 Thus, the Australian dollar is showing a correction quite justifiably. However, in such cases. it is not advisable to enter purchases of AUD/USD. In my opinion, trading decisions should be made based on the results of tomorrow's release, as inflationary indicators will provoke quite strong volatility. Moreover, it is difficult to predict the price movement vector at the moment, considering the rather optimistic forecasts. Inflated market expectations are a "time bomb." If the real numbers do not meet expectations, the pair will be within the 70th figure again.

Technically, there is also no certainty in regard to this matter. On the daily chart, the AUD/USD pair is located on the middle line of the Bollinger Bands indicator, between the Tenkan-sen and Kijun-sen lines, and under the Kumo cloud. The nearest support level is 0.7050, which is the lower BB line on the same timeframe. The key support level is still 0.7000.