The Australian Dollar cannot break away from the level of 0.7120 in any direction. The Marlin oscillator moves horizontally exactly along the neutral zero line. A similar pattern happened recently in mid-September (gray rectangle), after which the price sharply and deeply went down. Obviously, the market is waiting for the results of the American elections and is preparing to follow the major currencies. Our main scenario assumes that the price reaches the lower line of the price channel in the area of 0.6938 on November 4-5. Intermediate targets are 0.7058 and 0.6970. 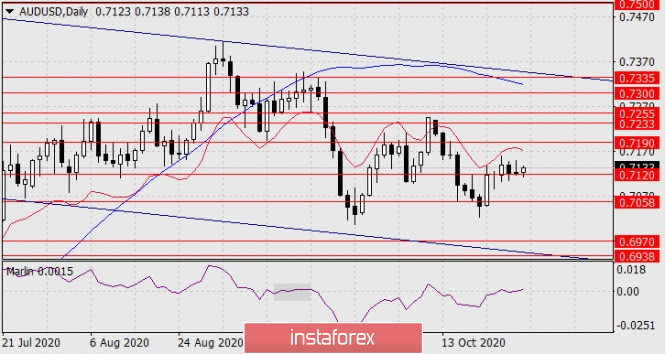 On a four-hour scale, the price continues to develop along the horizontal Kruzenshtern line. The Marlin oscillator has reached the border with the territory of a declining trend. Fixing the price above the Kruzenshtern line and turning the Marlin oscillator up may trigger the growth of the Australian Dollar to the target level of 0.7190. At the initial stage, we will take it as a premature market movement.