The Australian dollar did not close the gap at the opening of the week, so the current decline of 65 points from Friday's close may only be a correction from the growth of the previous days. According to Monday's review, the possible growth will also have the character of a correction from the movement starting September 1 and may end before reaching any of the target levels even at the nearest 0.7270. 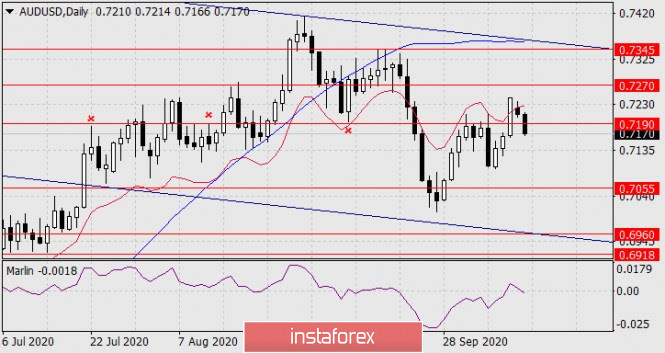 The Marlin oscillator went into a downward trend zone. Formally, this means that the price is moving towards the first target level of 0.7055, but let's look at the situation on a smaller chart. 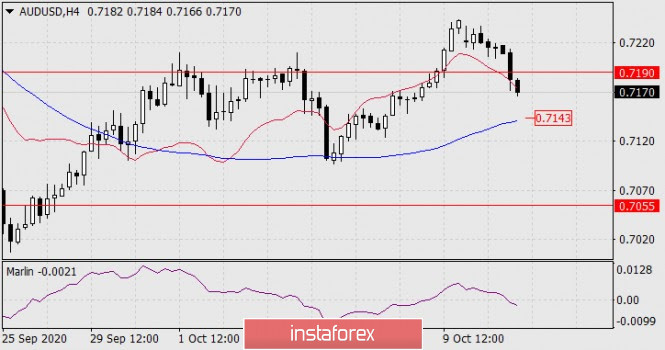 On the H4 chart, there is currently no price fixing under the level of 0.7190. The next candle should open under this level to achieve this. Also, the price remains above the Kruzenshtern indicator line at 0.7143 and even above the balance indicator line, i.e. the observed decline occurs within the growing short-term trend. Only the Marlin oscillator reminds the price that it is time to finish with growth but is still weak.

So, for the development of a downward scenario in the short term up to two weeks, the price should be fixed under the Kruzenshtern line below 0.7143. In the case of a medium-term decline in the AUD/USD currency pair, the impact of the gap (especially insignificant) can be ignored, sometimes they are closed only after a few years.