The Australian dollar and US currency pair failed to overcome the resistance level of 0.7200 from the first time and was forced to retreat to the middle of the 71st figure. The pair's future prospects depend on the upcoming Non-Farm Payrolls report today, which will be published at the start of the US session. However, this fundamental factor will not "work" for long, since the next meeting of the Reserve Bank of Australia will be held next Tuesday.

Ahead of the release of key data on the US labor market, it is recommended not to trade dollar pairs - it is difficult to predict the reaction of traders, and indirect indicators paint an ambiguous picture. For example, the increased rate in the number of initial applications for unemployment benefits over the past five weeks varies in the range of 880-840 thousand. Yesterday, this indicator came out slightly better than expected (+837 thousand), but this does not change the essence of the matter. For 11 weeks, since mid-spring, this indicator has been steadily and consistently declining, but it stalled in the summer - against the background of a surge in the incidence of coronavirus in some states of the country and "local lockdowns." 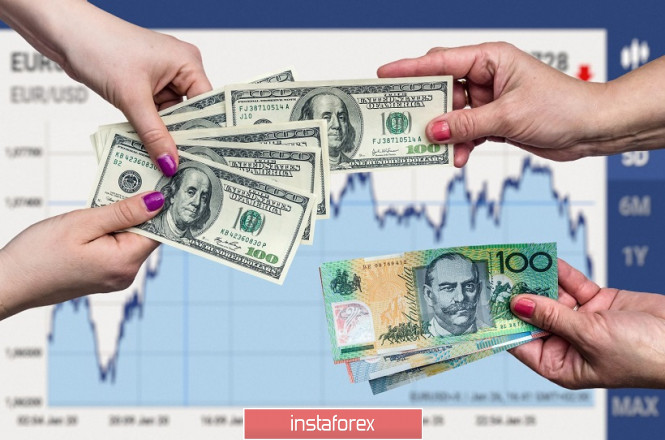 On the other hand, the number of cases and hospitalizations in the country began to gradually decrease in September. For example, in July, the daily increase in the number of cases was 50-60 thousand. Then, over the past days, this figure increased by 32 thousand. Such trends can also affect the dynamics of the labor market positively. According to experts, the unemployment rate in September will fall to 8.1%, and the number of people employed in the non-agricultural sector will grow by almost a million (940 thousand). Taking into account the updated monetary strategy of the Fed, the traders full attention will be focused on salaries. Based on the preliminary forecasts, "salary indicators '' will show growth in both annual and monthly terms (0.5% MoM and 4.8% YoY, respectively).

To put it simply, the market expects positive signals from the Non-Farm Payrolls report and from all of its components. If the real numbers are lower than forecast, the dollar will weaken against a basket of major currencies. Inflated expectations can be a "disservice" to dollar bulls, both literally and figuratively. But if the main components (especially with regard to inflation) come out at the level of forecasts or even one iota higher, the dollar will again be in favor - unless congressmen announce disappointing failed results of negotiations on a new stimulus package.

Also, it is important to note that the main index of personal consumption expenditures published yesterday also turned out to be in favor of the greenback. The core RSE accelerated to 1.6% year-on-year in August. The indicator came out in the "green zone" (the forecast was at the level of 1.4%), improving the mood of investors against the dollar.

As a result, the US currency retains the potential for further strengthening. It is worth noting that the market paid little to no heed to the news that Donald Trump and his wife fell ill with coronavirus, or at least the initial reaction is minimal. This announcement became known a few hours ago, but the US dollar index remained in the same range. However, S&P 500 futures have already fallen by more than 40 points, so the currency market may also "wake up" during the European session.

To overcome the resistance level of 0.7200, buyers of AUD / USD need a large-scale weakening of the greenback. An to be able to do this, you need a significant informational reason that will allow traders not only to enter the area of the 72nd figure and gain a foothold there, but also to get close to the next resistance level of 0.7250 (the upper limit of the Kumo cloud on the daily chart).

If the buyers of AUD / USD are unable to receive support in the form of US currency weakening, the pair is likely to gradually slide down. It is worth recalling that the next meeting of the Reserve Bank of Australia will be held on October 6, next Tuesday. In the run-up to this event, rumors began to spread in the market that the regulator may reduce the interest rate by the end of the year- either to zero or to a negative area. In my opinion, such a scenario looks quite unlikely, given the rhetoric of RBA members at the September meeting.

Once again stating that the coronavirus' impact on the economy was weaker compared to earlier forecasts, the Central Bank then maintained an optimistic wait-and-see position. The head of the RBA, Philip Lowe, is likely to refute the above rumors, supporting the Aussie. However, if the representatives of the regulator hypothetically allow the rate to be reduced to zero, the Aussie will collapse throughout the market, including in a pair with the greenback. Since concerns in regards to this scenario will increase in the run-up to the October meeting, the AUD / USD pair will remain under background pressure until Tuesday.

Thus, the level of uncertainty for the pair is quite high - primarily due to the Non-Farm Payrolls reports, which can strengthen the dollar's position or, conversely, emphasize its vulnerability. Therefore, it is better not to trade dollar pairs until today's key release. If we take a wider price range, then, the "Aussie" will not be able to show character until the October meeting of the RBA, in my opinion. This means that there is a high probability of a decline in the AUD / USD price to the lower boundary of the Kumo cloud on the daily chart, which corresponds to the 0.7050 mark.