Australian inflation did not disappoint: the main indicators came out either at the level of forecasts or exceeded the forecast values. Aussie received a reason for its corrective growth, although this growth is quite modest. The AUD/USD pair is still trading within the 71st figure, without leaving the boundaries of the established price range of 0.7100 - 0.7170. The ceiling of the specified range coincides with the lower boundary of the Kumo cloud on the daily chart and the resistance level. The lower border of the corridor (support level) coincides with the Tenkan-sen line on the same timeframe Aussie alternately pushes off from the boundaries of this range showing a wide-range flat. Given the first reaction of traders for today's release, we can assume that the pair will not leave the flat corridor this time.

The AUD/USD pair grew by only 50 points, reaching the middle of the 71st figure according to today's release result. This relatively calm market reaction is explained by the fact that the published indicators mostly coincided with the forecast values. Thus, the overall consumer price index in quarterly terms went up to 1.6% (the forecast was slightly lower-1.5%). On an annual basis, the indicator came out of the negative area and reached 0.7% (fully coinciding with forecasts). The core inflation index also did not surprise the market with a breakthrough growth – the components as a whole came out at the level of General expectations. 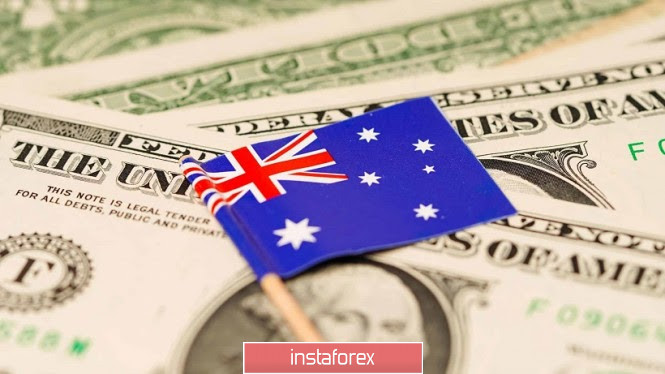 In other words, the key indicators of today's release did not let traders down – thanks to this factor because the Aussie did not remain afloat, but also showed corrective growth. But this is clearly not enough to break the trend, so investors are not in a hurry to invest in the Australian, given the array of negative fundamental factors. And it's not just about the "dovish" intentions of the RBA, whose members plan to lower the interest rate next week. The commodity market is also causing concern. First of all, we are talking about iron ore. As we all know, this is a strategically important raw material product for Australia, while China is the world's largest consumer of raw materials. It is worth noting that despite the prolonged political conflict between Australia and China, Australians continued to actively export iron ore to the Chinese throughout the year. However, at the moment there were problems of a non-political nature wherein the supply began to exceed the demand.

However, the price of iron ore in China fell significantly against the background of a record increase in stocks in seaports since February according to Reuters. At the beginning of this week, the price of iron ore futures on the Dalian commodity exchange fell by three percent to $ 113 per ton – the lowest figure for the past month. On the Singapore exchange, futures for this commodity also fell by 1.3% to 111 dollars per ton. This trend is due to the fact that stocks of imported iron ore in Chinese ports are growing for the fifth week in a row. As per the experts from ANZ,, this is due to a decrease in the volume of smelting at steel mills against the background of pressure on the margins of enterprises.

It is also worth Recalling that at the beginning of October, steel mills in China received an official verbal notification to stop importing Australian coal, which led to a drop in prices for marine coking coal. According to relevant media, Mongolia has replaced Australia as the leading supplier of coking coal to China. In this case, the motives of the Chinese are political in nature, but this does not change the essence. 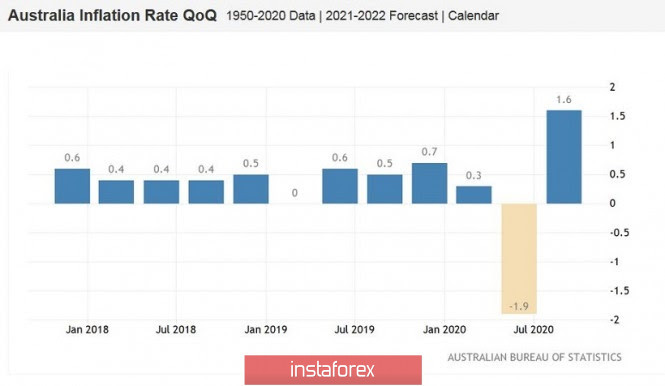 Thus, the fundamental background for the AUD/USD pair has not changed after today's release. The growth in inflation indicators suggests that the regulator will limit the rate cut by 15 basis points, rather than 25. The head of the RBA, Philip Lowe, said in one of his speeches that the regulator could lower the rate to 0.1%. At the same time, according to the minutes of the last meeting of the Central Bank, members of the regulator discussed the option of reducing the rate to zero. I believe that after the release of inflation data, the Central Bank will limit itself to the first option, which was voiced by Lowe.

But the very fact of monetary policy easing, the political conflict with China, the decline in the commodity market and the existing problems in the Australian labor market will continue to put pressure on the Australian dollar. This means that short positions are still a priority – especially when approaching the upper boundary of the flat corridor 0.7100-0.7170 (i.e., the lower boundary of the Kumo cloud on D1). The stop loss can be placed slightly higher at 0.7230 - this is the upper line of the Bollinger Bands indicator on the same timeframe. If buyers can overcome this target (this scenario is possible only with a large-scale weakening of the US dollar throughout the market), the southern scenario will lose its relevance. However, if we exclude the option of such unforeseeable circumstances, then selling AUD/USD will look like the most optimal trading solution.