EUR / USD. All attention is on American inflation

The US dollar index continues to trade flat in anticipation of today's release. Mainly, the "full-fledged mode" of the currency market started working only on Tuesday as the States celebrated yesterday their Columbus day while Thanksgiving day in Canada. Accordingly, American and Canadian trading platforms were closed. Major currency pairs showed weak price fluctuations taking advantage of the "semi-exit".

Nevertheless, the dollar index slightly strengthened its position throughout the market although it remained in the flat corridor at the end of Monday. The bears were unable to lower the indicator below 93.00, after which the greenback showed a corrective growth. The formal reason for this growth was the information that the White house is ready to compromise on the issue of agreeing on a new package of incentives. The trump administration raised the bar to $1.8 trillion, while the previously allowed maximum was at the level of one and a half trillion dollars. Greenback's reaction was weak because the amount proposed by the White house is still 400 billion less than the one that the Democrats insist on and the Republican senators oppose such an expensive bill. As of this moment, the situation is up in the air: Treasury Secretary Steven Mnuchin will discuss the proposal with House speaker Nancy Pelosi this coming Friday. Until then, the market will be guided in this matter only by backstage rumors. 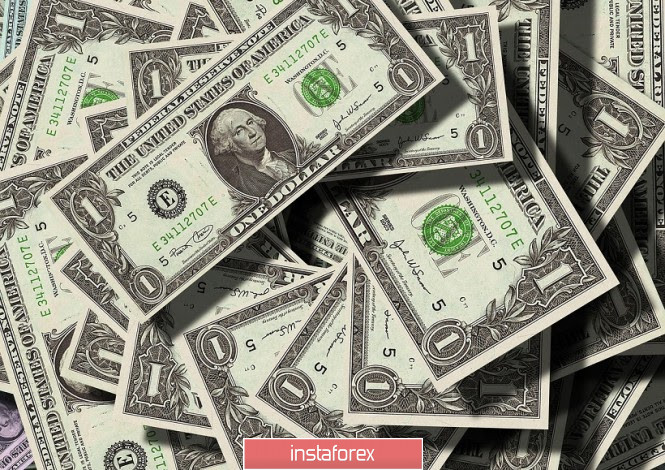 Therefore, the dollar index could only move away from the support level of 93.00, but did not go up above 93.22. The currency pairs of the "major group" showed approximately the same trajectory. The dollar to some extent demonstrated its superiority, although against the background of low volatility and this superiority was expressed in minimal volumes.

By the way, the support for the greenback (this time as a protective tool) was also provided by the IMF report, which turned out to be very pessimistic. The international monetary Fund is concerned not only about the coronavirus pandemic but also about climate change. The head of the organization Kristalina Georgieva called on the authorities of countries with the largest amount of emissions to the environment to set a minimum cost of carbon quotas. According to the Foundation's experts, "climate change possesses a serious threat to global economic growth and prosperity."

All of the above factors had only an indirect and/or short-term impact on the dynamics of the US currency. Now we can not talk about a clear advantage of the dollar but in my opinion, the greenback will remain vulnerable for several more weeks – at least until the beginning of November, when the presidential election will be held. Investors fear a political clinch and lengthy legal proceedings if Trump does not recognize the results of the vote. According to all polls, Biden is currently in the lead but the current head of the state has already recovered from the coronavirus and is now going on an election tour in which his position may significantly strengthen. In other words, the intrigue of the upcoming elections persists, so traders are likely to be wary of the dollar until the end of this epic.

For shorter-term periods, the reaction of dollar pairs depends on the dynamics of the key economic indicators. So, the growth of US inflation can provoke quite strong volatility especially if they come out in the "red zone". According to preliminary data, the overall consumer price index in monthly terms should grow in September by only 0.2% on a monthly basis and by 1.2% on an annual basis. The core index excluding food and energy prices should show similar dynamics: (+0.2 m/m; +1.6% y/y). In other words, experts expect a slowdown in inflationary growth, which is fraught with a weakening of the dollar. Although in my opinion, the greenback will significantly decrease throughout the market only in the case of a "red zone" if the published figures does not reach the forecast values. 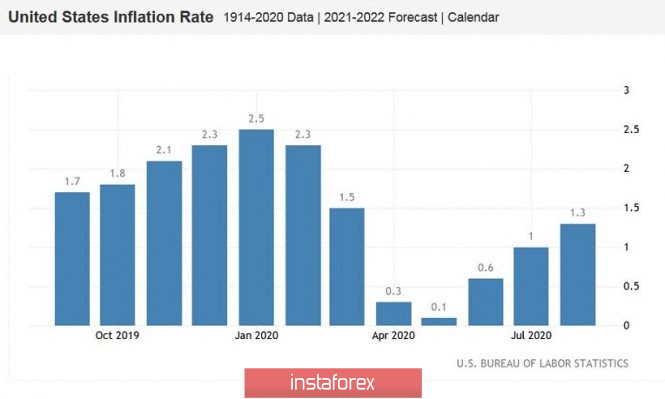 For the Euro-dollar pair, there is a possible price increase for other reasons. Reuters reported yesterday that representatives of the ECB do not intend to follow the example of the Federal reserve and are not going to introduce a policy of targeting average inflation. As an unnamed source of the news Agency noted, "there are concerns that such a policy will lead to unrealistic expectations." Unfortunately, Reuters journalists did not specify exactly how many members of the regulator hold this opinion. But the very fact of such doubts may support the Euro, especially if in the future one of the ECB members voices a similar position.

Thus, the dynamics of the EUR/USD currency pair today will largely depend on the dynamics of the American inflation. If you trust the preliminary forecasts, you can open longs from current positions with the first Northern target at 1.1880 (the upper boundary of the Kumo cloud coinciding with the upper line of the Bollinger Bands indicator). But the option of opening trading positions based on the result of today's release looks more reliable. If inflation turns out to be on the side of the dollar, this will allow you to open long positions of EUR/USD on the decline at a more favorable price.