The Euro-Dollar took a dive downwards, updating two-week price lows. The Coronavirus has come to the fore again, only this time it is playing against the European currency, not against the greenback. The rate of spread of Covid-19 on the European continent is growing every day and many EU countries are forced to tighten quarantine restrictions. Meanwhile, the news from the front of pharmacology is not good. Leading companies in this field say that mass production of the vaccine will not begin until next year in the spring of 2021. "Coronavirus factor" has become the main leitmotif of today's trading, but not the only one.

Still, Covid-19 is the cause of today's EUR/USD decline. The catalyst for the downwards impulse was France, where over the past day more than 20 thousand cases of infection were registered (with a population of 65 million). Reacting to such abnormally high numbers, the government decided to introduce a state of emergency sanitary situation in the country. A little later, President Emmanuel Macron imposed a curfew in the capital and major Metropolitan areas – in particular, in Marseille, Lyon, Toulouse, Lille, Grenoble, Montpellier, Rouen and Saint-Etienne. In total, the updated quarantine measures will affect about 20 million citizens of the country. So far, we are not talking about a full lockdown: cities will "freeze" from 21:00 to 6 am. During this time period, all cafes and any commercial activities (except hospitals and pharmacies) will be closed. Without a valid and confirmed reason, you will not even be able to leave the house (a fine of 135 euros for the first time and 1500 euros in case of repeated violations). The "semi-lockdown" mode will start on October 17 and last for four weeks. At the same time, Macron warned that the special measures may be extended by law until December 1. 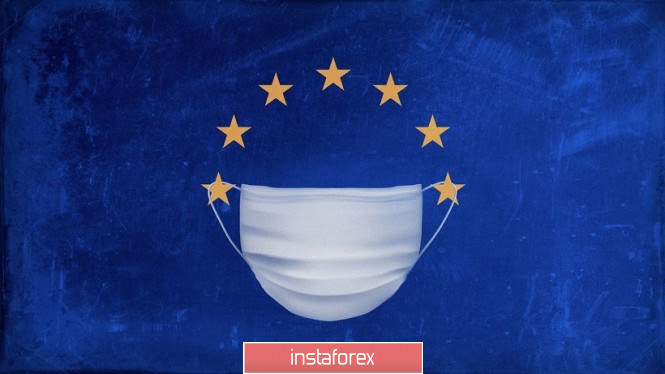 A state of emergency was also imposed in Portugal, though only for two weeks for the time being. Over the past day, 2,070 infected people were registered there. This is the highest figure for the entire period of the pandemic. It is not yet known what restrictions will be tightened but according to the country's Prime Minister, these measures will allow the authorities to "restrict the movement of citizens and public life."

Disappointing news also comes from Germany, which is known to be the locomotive of the European economy. The Germans decided not to introduce a state of emergency yet, tightening only the rules on wearing masks. In some regions, bars, restaurants and other public catering establishments will be restricted until 23:00. Also, there is a limit of 10 people at private gatherings. Additional quarantine measures are also being introduced in the Netherlands. Food establishments will be closed there. Only take-out orders are allowed. Quite strict restrictions were also introduced in the Czech Republic, where not only cafes were closed, but sports events were also halted. At the same time, the country's Prime Minister Andrei Babish said that he does not rule out the introduction of a complete lockdown if the rate of growth of the disease does not slow down.

In other words, almost every EU country is now feeling the effects of the second wave of the pandemic. Each state reacts in its own way, but the trends are quite obvious: quarantine restrictions are being tightened to some extent everywhere. Once again, tourism, services, and air transportation are at the forefront of the attack. The Euro could not stay away from such a news flow, especially against the background of weak macroeconomic reports that indicate a slowdown in recovery processes (take at least the latest data on the growth of European inflation).

The dollar index, in turn, is showing growth today, although this growth is due solely to the external fundamental background. A surge in anti-risk sentiment in the currency market has increased demand for a safe greenback. Figuratively speaking, the Dollar has again become the beneficiary of troubled times, even despite the array of its own problems. For example, today the US Treasury Secretary said that the bill on additional assistance to the economy is unlikely to be agreed before the presidential election. A similar position was voiced by the leader of the Democrats in the House of representatives, Nancy Pelosi.

But the growth of anti-risk sentiment leveled this fundamental factor. After all, in addition to the growing number of infected people and the tightening of quarantine restrictions in Europe, traders have other reasons to worry. In particular, this morning came negative statistics from China. According to published data, the consumer price index in China in September increased by only 1.7%. This is the weakest rate of inflation growth since March last year. The producer price index, which is an early signal of changes in inflationary trends, also disappointed the market. This indicator, firstly, remained in the negative area, and secondly, it was in the "red zone", falling short of the weak forecast values (-2.1% instead of -1.9%). 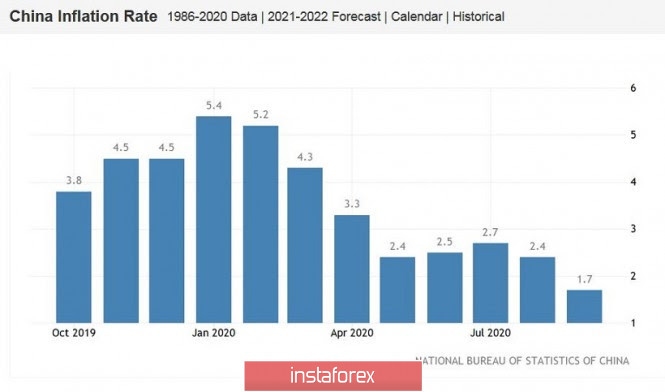 In addition, the head of the Reserve Bank of Australia, Philip Lowe, who announced a reduction in the RBA's interest rate, also contributed to the general negative mood. Similar intentions were recently expressed by the head of the Bank of England, Andrew Bailey, and the head of The Reserve Bank of New Zealand. Some experts have already assumed that the second wave of the coronavirus epidemic will be followed by a wave of dovish decisions by central banks.