A good signal to buy the euro from the 1.1685 level appeared yesterday afternoon, which I wrote in yesterday's afternoon review. Let's figure it out. On the 5-minute chart, you can clearly see how the bulls quickly took the initiative in their own hands after testing support at 1.1685, and the statements of European Central Bank President Christine Lagarde regarding the shift in the eurozone's inflation target caused the single currency to grow, which was then picked up by the good data on the American economy. I also mentioned such a probability in yesterday's reviews. 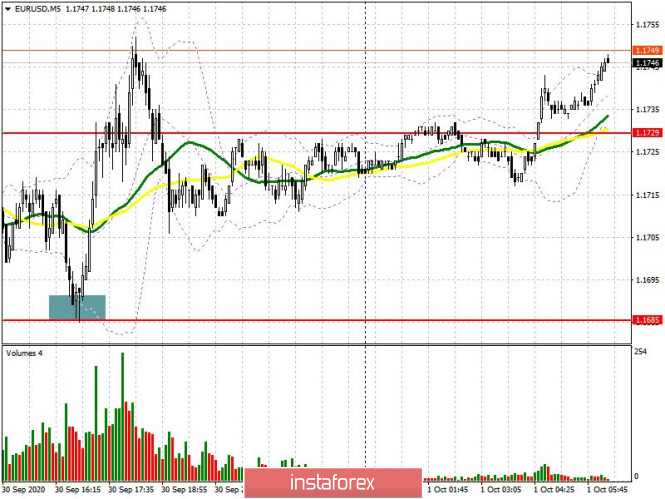 At the moment, the nearest levels have changed. Euro buyers should prioritize a breakout and then settle above the resistance of 1.1754, which will cause EUR/USD to grow to a high of 1.1796. Thel 1.1833 level will be a distant target, where I recommend taking profits. However, it is worth paying attention to the economic calendar. The report on activity in the manufacturing sector of eurozone countries will be released today, which may have a negative impact on the euro, as the indicators have a chance to significantly slow down in early autumn this year. In this scenario, it is best to wait for a false breakout to form in the support area of 1.1713, but I recommend buying EUR/USD immediately on a rebound but only from a larger low in the 1.1668 area, counting on a correction of 20-30 points within the day.

Sellers of the euro need to protect resistance at 1.1754, and forming a false breakout on it will be a signal to open short positions in the pair. In this case, the main target will be a low of 1.1713, consolidation below it will form an additional entry point to short positions and return the market to the bears, making it possible for them to reach the 1.1668 area, where I recommend taking profits. Support at 1.1617 will be a distant target. If there is no critical activity when resistance is being tested at 1.1754, and the eurozone data turns out to be better than economists' forecasts, then it is best not to rush to sell, but to wait for the quote to grow to a new resistance at 1.1796 and sell the euro there immediately on a rebound based on a correction of 20-30 points within the day. 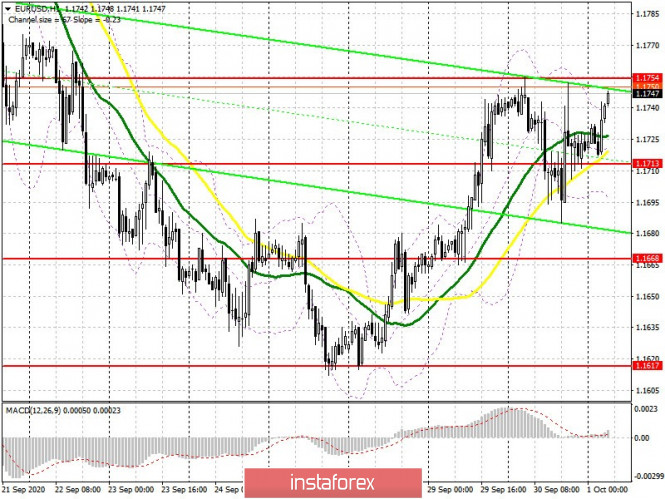 Trading is carried out above 30 and 50 moving averages, which indicates that an upward correction is about to form in the euro.