EUR/USD: plan for the European session on October 13. COT reports. Bulls' optimism is gradually fading away. Bears aim for

There were no signals for entering the market in the afternoon given the low volatility of the market, and Columbus Day in the US, although it is already obvious that Friday's bullish momentum is gradually fading away, and the pressure on the euro is returning.

Nothing has changed from a technical point of view since none of the levels that we mentioned yesterday were tested. The only way for the euro to grow is if a breakout appears and the price settles above the resistance of 1.1824, which will open a direct road to new highs in the 1.1868 and 1.1915 areas, where I recommend taking profits. However, we can expect such a strong bullish momentum in the beginning only if the latest inflation indicators in Germany turn out to be good, as well as if we receive a high assessment of the sentiment of the eurozone business environment. The reports are scheduled for release in the first half of the day. If the pressure on the pair persists further, and this option is more realistic, testing support at 1.1783, where the moving averages pass, playing on the side of buyers, will become a more optimal buying scenario. However, it is possible to open long positions from this level only if a false breakout is formed there. If bulls are not active, I advise you to hold back from buying the euro to a larger support area of 1.1737, from where you can enter the market immediately on a rebound, counting on a correction of 30-40 points. 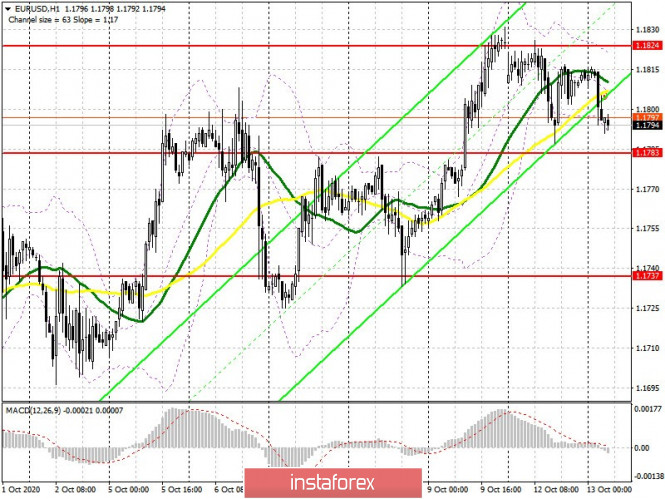 The bears failed to emerge in the afternoon, since they did not reach resistance at 1.1828, and also failed to test support at 1.1783. An important task for the sellers of the euro is to form a breakout and settle below the 1.1783 area, which forms a new entry point for short positions with the goal of falling to a low of 1.1737, where I recommend taking profits. If the pair rises in the afternoon, one can expect a rebuff from the bears at the 1.1824 level. However, I recommend opening short positions from it only if a false breakout is formed there. In case bears are not active, as well as quite good data on German inflation, it is best not to rush to sell, but to wait until a larger resistance at 1.1868 has been updated, from where you can sell the euro immediately on a rebound, counting on a correction of 20-30 points within the day...

Trading is carried out in the area of 30 and 50 moving averages, which indicates a slowdown in bullish momentum.