Sell positions on the euro could only be observed during the European session, where the bulls were actively defending the 1.1722 area. I analyzed this signal in more detail in last Friday's review. No signals to enter the market in the afternoon, and the breakout of 1.1722, which took place before the good US retail sales growth report was released, did not form a convenient long entry point, since there was no downward test at 1.1722. As a result, by the end of the day the market returned to the area below the aforementioned range, keeping the market under the control of sellers.

Before talking about today's prospects for the pair's movement, let's look at the situation in the futures market, which tells us that the number of people willing to buy euros has decreased in October this year. The weak prospects for European economic recovery, expectations of a new monetary stimulus program from the European Central Bank and a new wave of COVID-19 in many EU countries are forcing traders to take a wait-and-see attitude, as well as reduce their long positions in the European currency. The Commitment of Traders (COT) report for October 13 showed a decrease in long positions and an increase in short ones, which led to an even greater decline in the delta. Despite this, buyers of risky assets believe that the bull market will continue, but they prefer to act with caution, as there is no good news for the eurozone yet. Thus, long non-commercial positions decreased from 231,369 to 228,295, while short non-commercial positions increased from 57,061 to 59,658. The total non-commercial net position decreased to 168,637, against 174,308 a week earlier. which indicates a wait-and-see attitude from new players, however, bullish sentiments for the euro remain rather high in the medium term. The more the euro will decline against the US dollar at the end of this year, the more attractive it will be for new investors. 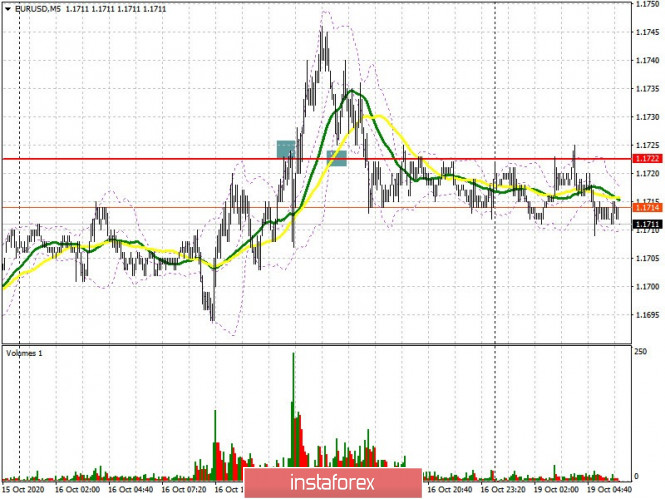 As for the technical picture of the pair, it hasn't changed much compared to last Friday. Bulls are focused on the 1.1722 level and the pair's direction for the long term will depend on their actions in this range. Now the bulls are trying to gain a foothold above this area, but only a real breakout and a test of this range from top to bottom, which buyers could not show during last Friday's US session, forms a signal to open long positions in anticipation of sustaining the upward correction to the resistance area of 1.1756, where I recommend taking profits. If the bears manage to protect this range in the first half of the day, and today we only have speeches from the heads of the European Central Bank and the Federal Reserve, then it is best to postpone taking buy positions and wait for an update of the weekly low of 1.1688, where forming a false breakout will be a signal to open long positions. It is dangerous to buy from this level immediately on a rebound, since this will be the fifth consecutive test. Otherwise, I recommend buying EUR/USD only for a rebound from the new low of 1.1644, counting on a correction of 15-20 points within the day.

Sellers will continue to try to protect resistance at 1.1722, but there is no need to rush to sell from this level. It is best to wait until bulls make another unsuccessful attempt to go beyond 1.1722 and then to return to this range. This scenario will lead to producing a larger downward wave to the support area at 1.1688. An equally important task for continuing the bear market is a breakout of this range, settling in the area below it produces a new signal for selling the euro with the main goal of testing a new low around 1.1644, where I recommend taking profit. The pressure on the euro could significantly increase if ECB President Christine Lagarde speaks directly about easing monetary policy in today's speech. If the bulls turn out to be stronger in the first half of the day, then it is best to postpone sell positions until the high of 1.1756 has been updated, counting on a correction from it by 15-20 points within the day. 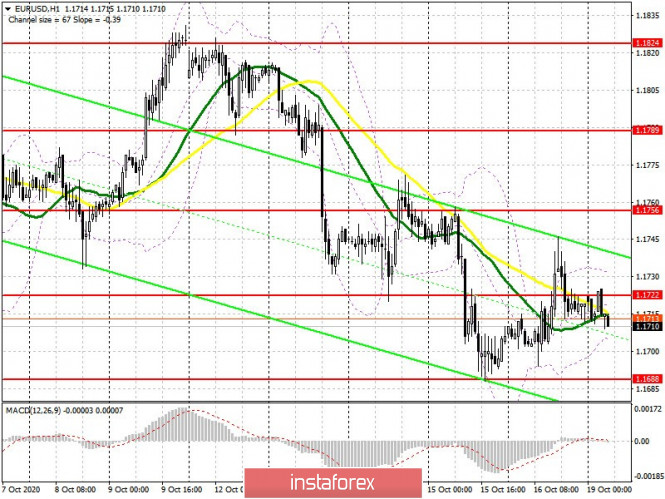 Trading is carried out in the area of 30 and 50 moving averages, which indicates market uncertainty regarding its direction for the long term, but with a slight advantage for sellers of the euro.

A breakout of the lower border of the indicator around 1.1705 will increase pressure on the euro. The breakout of the upper border in the 1.1730 area will lead to another attempt to strengthen the pair.