EUR/USD: plan for the European session on October 20. COT reports. Bulls need a breakout of 1.1793 to maintain growth potential

Buyers of the euro coped with resistance at 1.1770 without any problems in the afternoon, however, they failed to wait for a convenient entry point even from this level. Let's take a look at the 5-minute chart. You can clearly see how the bulls are attacking 1.1770 and continue to push the euro up to the resistance area of 1.1797, from which I recommended selling EUR/USD immediately on a rebound. But we did not even reach five points to this level, so whoever did not enter the market in short positions and missed this entry point did the right thing, since there was no signal to sell. 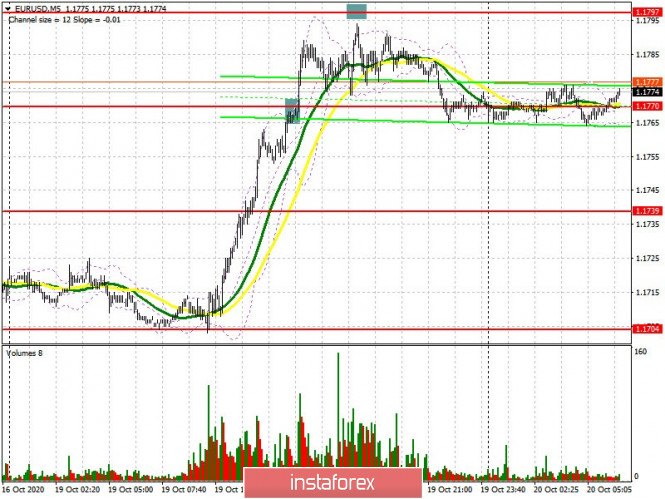 Today a lot will depend on how buyers appear in the resistance area at 1.1793. If the bulls immediately test this range and try to gain an even higher foothold there, then wait until this level has been updated from top to bottom before buying the euro, since the probability of forming a false breakout there is quite high. This is all due to the divergence that is currently forming on the MACD indicator. If bears do not exceed the 1.1793 level, then you can buy and wait until the euro recovers and reaches a high of 1.1824, as well as for the renewal of the larger resistance at 1.1868, where I recommend taking profit. An equally important task for the bulls, in the absence of fundamental statistics, will be to protect support at 1.1765, slightly below which there are now moving averages playing on the side of the euro buyers. Forming a false breakout there and rebounding from the averages will be a signal to buy EUR/USD. If there is no rapid upward movement from this range, then it is best to postpone buy positions until the intermediate support at 1.1739 has been tested, or open long positions immediately on a rebound from the low of 1.1704, counting on a correction of 15-20 points within the day.

The Commitment of Traders (COT) report for October 13 showed a decrease in long positions and an increase in short ones, which led to an even greater decline in the delta. Despite this, buyers of risky assets believe that the bull market will continue, but they prefer to act with caution, as there is no good news for the eurozone yet. Thus, long non-commercial positions decreased from 231,369 to 228,295, while short non-commercial positions increased from 57,061 to 59,658. The total non-commercial net position decreased to 168,637, against 174,308 a week earlier. which indicates a wait-and-see attitude from new players, however, bullish sentiments for the euro remain rather high in the medium term. The more the euro will decline against the US dollar at the end of this year, the more attractive it will be for new investors.

Sellers need to defend resistance at 1.1793, since a lot depends on it. Forming a false breakout at this level in the first half of the day, which may occur after updating Monday's high, together with the confirmation of the divergence, which is now visible on the MACD indicator, will be an excellent signal to open short positions in euro with the goal of breaking and settling below the support of 1.1765 , slightly below which the moving averages pass. However, it will be possible to talk about gradually returning control to the bears after settling below 1.1765, which forms a good signal to sell the euro to the 1.1739 area, but the next target will be the low of 1.1704, where I recommend taking profit. In case EUR/USD grows further along the trend and a breakout is formed on resistance at 1.1793, I recommend not to rush to sell, but to wait until a new high at 1.1824 has been updated, or open short positions immediately on a rebound from the resistance of 1.1868, counting on a correction of 15-20 points within the day. 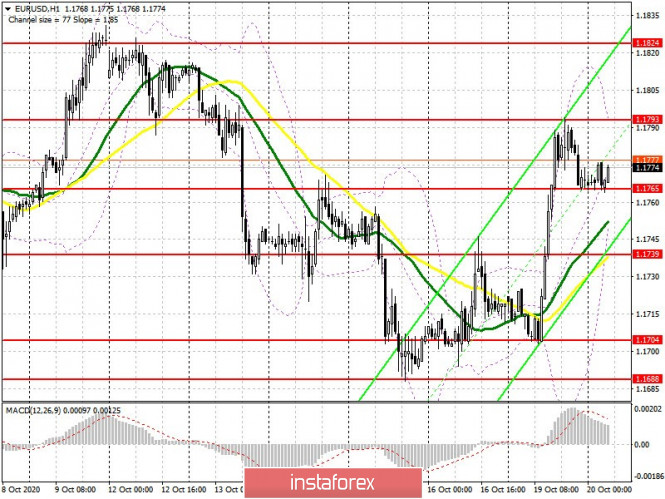 Trading is carried out above 30 and 50 moving averages, which indicates the continued bullish sentiment in the market.