EUR/USD: plan for the European session on October 22. COT reports. Bullish momentum is fading, but there is still a chance

Buyers of the euro did not try to sustain the upward trend in the afternoon, nothing came of it. Let's take a look at the 5-minute chart and break down yesterday's trades. Bulls failed to go beyond 1.1868 during the first half of the day, which led to forming a false breakout and a signal to sell the euro. However, this did not lead to a large sale, as a result of which, the bulls took resistance at 1.1868 in the afternoon and formed a good entry point for long positions, however, a powerful upward moment did not occur, which resulted in extinguishing hopes for further growth. 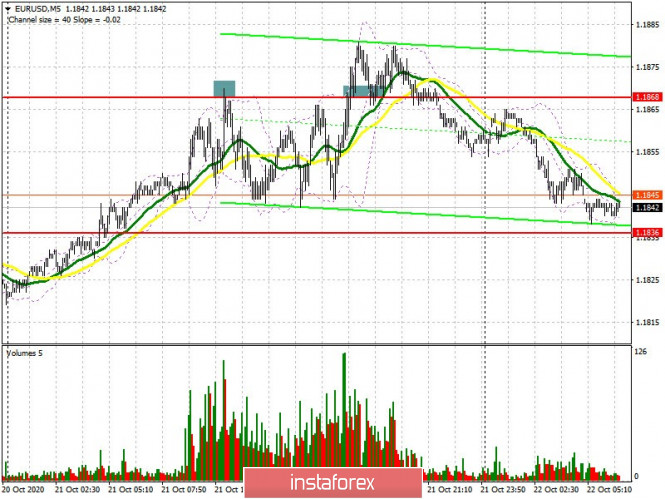 At the moment, the bulls need to think about how they can protect support at 1.1836. Forming a false breakout at this level in the first half of the day will be a signal to open long positions in euros during the weekly bullish trend. The primary goal is to return to resistance at 1.1875. Forming a breakout on this range and settling on it, similar to yesterday, will serve as a new signal for you to open long positions in order to test the highs of 1.1915 and 1.1964, where I recommend taking profits. In case bulls are not active at 1.1836 in the first half of the day, and since we do not have important fundamental reports today, we can expect a downward correction in EUR/USD, down to the area of a large support at 1.1802, where you can consider buy positions on the euro. I recommend opening long positions immediately on a rebound, but only from a low of 1.1765, counting on a correction of 15-20 points within the day.

The Commitment of Traders (COT) report for October 13 showed a decrease in long positions and an increase in short ones, which led to an even greater decline in the delta. Despite this, buyers of risky assets believe that the bull market will continue, but they prefer to act with caution, as there is no good news for the eurozone yet. Thus, long non-commercial positions decreased from 231,369 to 228,295, while short non-commercial positions increased from 57,061 to 59,658. The total non-commercial net position decreased to 168,637, against 174,308 a week earlier. which indicates a wait-and-see attitude from new players, however, bullish sentiments for the euro remain rather high in the medium term. The more the euro will decline against the US dollar at the end of this year, the more attractive it will be for new investors.

In order for sellers to be able to take control of the market and continue the downward correction, it is necessary to settle below support at 1.1836, testing it on the reverse side forms a good signal to sell the euro, in hopes to update of the low of 1.1802, where I recommend taking profit. The next target is support at 1.1765. If EUR/USD increases in the first half of the day, then it is best not to rush to sell, but to wait until a false breakout forms in the resistance area of 1.1875. You can open short positions immediately on a rebound from the high of 1.1915, counting on a correction of 15-20 points within the day. 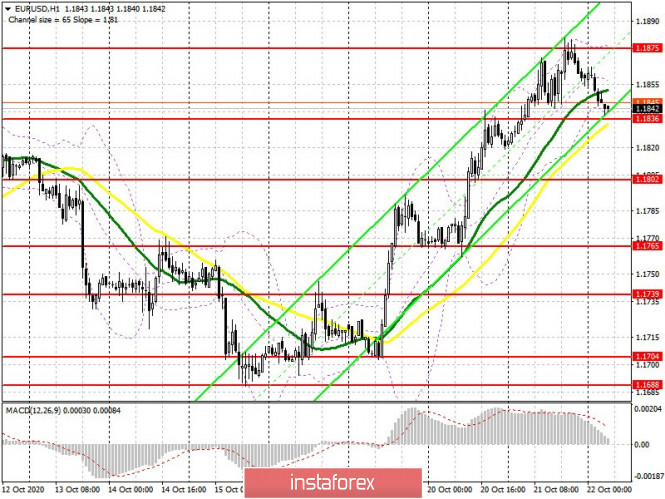 Trading is carried out in the area of 30 and 50 moving averages, which indicates uncertainty regarding the direction and that the bullish momentum is fading.

Interesting? Write a comment below.
 #EUR/USD: plan for the European session on October 22. COT reports. Bullish momentum is fading, but there is still a chance
Forward 
Backward 