EUR/USD: plan for the European session on October 26. COT reports. Market continues to balance. Bulls have a chance to update

Two long entry points appeared last Friday. Let's take a look at the 5 minute chart and break down the trades. The first buy signal appeared at the beginning of the European session after a false breakout at the 1.1797 level. You can see how the bears are trying to catch on to this level, but nothing came of it. The euro starts to rise as a result of a false breakout. Then the bulls manage to catch on the resistance of 1.1836, which already forms the second entry point. However, the movement was about 20 points, after which the bullish impulse faded.

Before talking about today's prospects for the pair's movement, let's take a look at the situation in the futures market, which has not changed much. This once again confirms the fact that the pair has been in the horizontal channel lately. Recent reports on activity in the eurozone indicated weak prospects for the recovery of the European economy due to the risk of a second wave of Covid-19. This forces traders to take a wait-and-see attitude. Expectations of further monetary stimulus from the European Central Bank also limit the euro's growth potential. The Commitment of Traders (COT) report for October 20 recorded an increase in long positions and short ones. However, there were more of the latter, which led to an even greater decrease in the positive delta. Despite this, the buyers of risky assets believe in the continuation of the bull market, but prefer to act with caution, as there is no good news for the eurozone yet. Thus, long non-commercial positions increased from 228,295 to 229,878, while short non-commercial positions increased from 59,658 to 63,935. The total non-commercial net position decreased to 165,943, against 168,637 a week earlier.... However, the bullish sentiment for the euro remains rather high in the medium term. The more the euro falls against the US dollar at the end of this year, the more attractive it is for new investors. 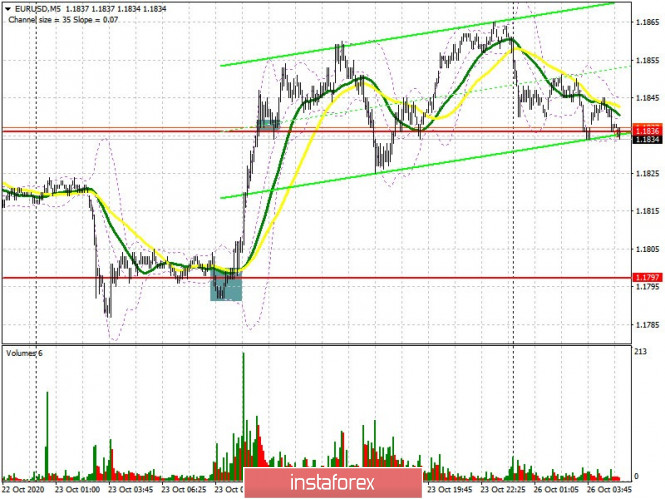 As for the pair's technical picture, bulls are now focused on the 1.1826 level, and its direction for the week will depend on their actions in this range. Now the bulls need to defend this support level, but only a false breakout in that area can produce a signal to open long positions while expecting an upward correction to the resistance area of 1.1864, where I recommend taking profits. The main task of buyers is to go beyond and settle above this range, which will form another entry point to long positions, similar to Friday's buy positions, and will open a direct road for EUR/USD to the highs of 1.1915 and 1.1964. If the bears turn out to be stronger and they manage to pull down the euro below 1.1826, then it is best to postpone long positions and wait until the weekly low at 1.1792 has been updated, where a false breakout will be a signal to open longs. Otherwise, I recommend buying EUR/USD only for a rebound from the new low of 1.1762, counting on a correction of 15-20 points within the day.

Sellers will try to push through the 1.1826 support, and today's IFO report which can turn out to be weak can provide some help. Settling below 1.1826 forms a good entry point for short positions, which will open a direct road to the low of 1.1792, where I recommend taking profits. However, bears need a breakout for this range, which will open a direct path for EUR/USD to lows in the 1.1762 and 1.1732 areas. An equally important task for the bulls is to protect resistance at 1.1864, which may be tested today in case of higher economic expectations for Germany. Forming a false breakout at this level will be a signal to sell the euro, in hopes for it to fall to support at 1.1792. I recommend opening short positions immediately on a rebound from a new high of 1.1915, counting on a correction of 15-20 points within the day. 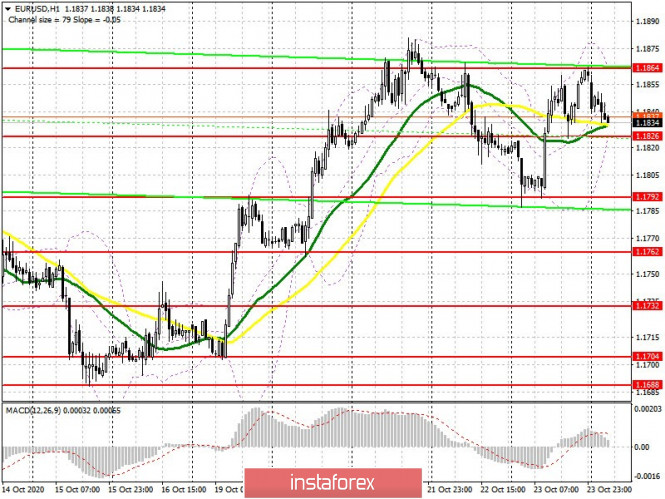 Trading is carried out in the area of 30 and 50 moving averages, which indicates market uncertainty regarding the long term direction, but with a slight advantage of euro buyers.

A breakout of the lower border of the indicator around 1.1826 will increase pressure on the euro. The breakout of the upper border in the 1.1864 area will lead to another attempt to strengthen the pair.

Interesting? Write a comment below.
 #EUR/USD: plan for the European session on October 26. COT reports. Market continues to balance. Bulls have a chance to update
Forward 
Backward 