EUR/USD: plan for the European session on October 28. COT reports. Euro under pressure, several objective reasons for this

Sell positions for the euro collapsed yesterday, and the bulls tried to regain resistance at 1.1826 and they even managed to form a good entry point from it. Let's take a look at the 5-minute chart. You can see how testing the 1.1826 level from top to bottom, which was supposed to be a confirmation and a signal to open long positions in EUR/USD, turned out to be unsuccessful and the pair quickly returned below the 1.1826 area. After that, the bears formed a fairly convenient entry point into short positions, which led to a new wave of short positions. However, the euro did not continue to fall and buyers still managed to gain a foothold above 1.1826 in the afternoon, but they did not wait for a good growth from this level. US President Donald Trump's statements and the spread of the coronavirus continued to put pressure on the euro, as did weak fundamental reports on the American economy, scaring away investors who are betting on risky assets. 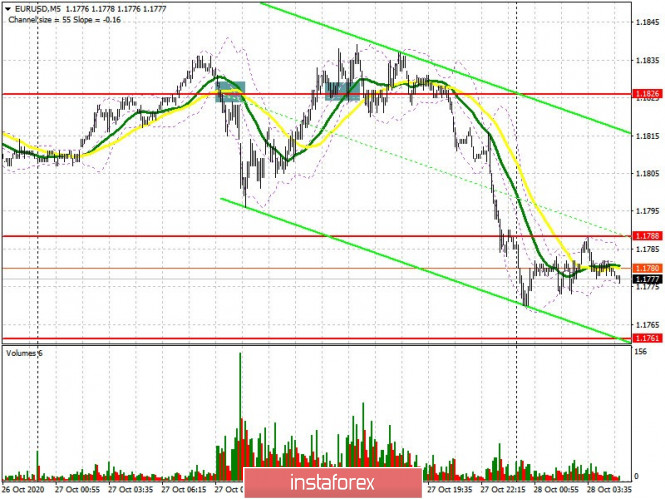 Today's focus will be on the resistance at 1.1796, which transformed from 1.1787. In order to talk about the resumption of the bull market, buyers need to settle above this range. Testing the 1.1796 area from top to bottom generates a signal to buy EUR/USD in order to return to yesterday's high at 1.1835, where I recommend taking profit. The 1.1864 level will be the next target. Buyers of the euro are unlikely to be as active since important fundamental data will not be released in the first half of the day. If the euro is still under pressure, I recommend waiting for EUR/USD to fall to the support area of 1.1761 and open long positions there if a false breakout is formed. You can buy the pair immediately on a rebound after the next low at 1.1732 has been tested, counting on a correction of 15-20 points within the day.

Sellers should protect resistance at 1.1796, just above which the moving averages pass. Considering that we have a downward trend, it is better to expect that it would continue today. Therefore, forming a false breakout in the 1.1796 area forms a new entry point for short positions, and the main target will be a breakout and the pair will need to settle below the 1.1761 level. Testing it from the bottom up forms another signal to sell the euro, which will lead to a larger sale in the area of a low of 1.1732. The 1.1704 level will be the next target, where I recommend taking profits. If we don't hear positive news on Brexit today, it will keep the pressure on the euro even more. If the pair rises above 1.1796 and bears are not active there, I recommend postponing short positions and sell the euro immediately on a rebound from yesterday's high of 1.1835, counting on a correction of 15-20 points within the day.