The euro was under pressure yesterday despite the absence of important fundamental reports, as things in the eurozone countries are gradually deteriorating amid the spread of the second wave of coronavirus. In Germany, Chancellor Angela Merkel announced a partial lockdown with the closure of bars, restaurants and other public places. As for yesterday's deals, the morning sale was more successful. The 5-minute chart clearly shows how, after breaking through the 1.1761 level, the bulls tried to return the market to their side, but testing this area from the bottom up formed a new signal to open short positions in order to continue the current downward trend, which caused the pair to fall to the support area of 1.1732. I recommended opening long positions immediately on a rebound from this level, counting on a correction of 15-20 points, which is what happened. The bears formed a breakout and settled below this range in the afternoon, however, a larger downward movement did not take place, as a result of which the pair returned back to the resistance of 1.1761, which is currently being traded around. 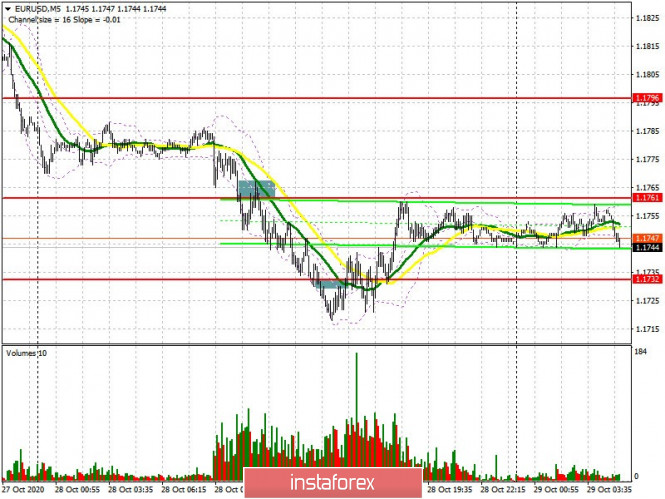 Focus will be on resistance at 1.1761. Buyers need to settle above this range in order to return the bull market. Testing the 1.1761 area from top to bottom generates a signal to buy EUR/USD in order to hit a high of 1.1796, where I recommend taking profits. The 1.1835 level will be the next target. However, a lot will depend on the European Central Bank's decision on interest rates. The pressure on the euro will return in case stimulus programs are expanded and rates are lowered. Therefore, forming a false breakout at the 1.1723 level in the first half of the day will be a signal to open long positions. In the scenario of a breakout of this range, I do not recommend rushing to buy. Updating support at 1.1688 and forming a false breakout there will allow the bulls to count on some upward correction of the pair, or at least a temporary stop in the bear market. I recommend opening long positions immediately on a rebound from a low of 1.1644 with the aim of a rebound of 15-20 points within the day.

The sellers' should protect resistance at 1.1761, slightly above which the moving averages pass, playing on the bears' side. Considering that the trend is downward, it is better to bet that it will continue today, since the ECB's decisions may negatively affect the euro. Forming a false breakout in the 1.1761 area forms a new entry point for short positions, and the main target will be a breakout and having to settle below the 1.1723 level. Testing it from the bottom-up, similar to yesterday's sale, which I analyzed a little higher, generates an additional signal to open short positions in euros, which will lead to a larger sale in the area of the low of 1.1688. The 1.1644 level will be the next goal, where I recommend taking profits. If the pair rises above 1.1761 and there is no bears' activity there, I recommend postponing short positions and selling the euro immediately on a rebound from yesterday's resistance at 1.1796, counting on a correction of 15-20 points within the day. 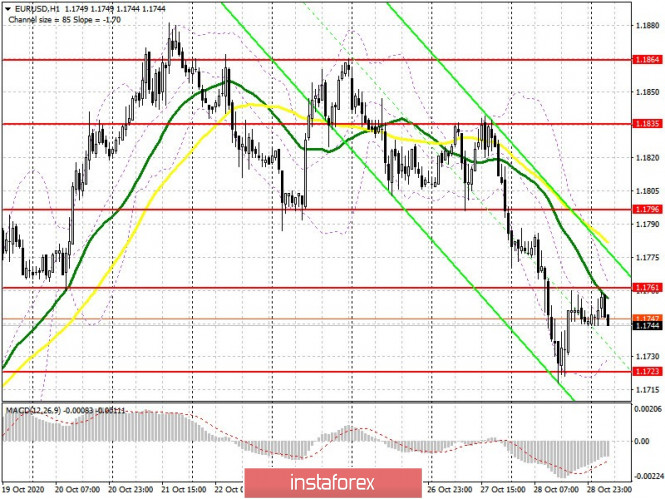