EUR/USD: plan for the European session on October 30. COT reports. Euro drops on expectations of ECB easing of monetary policy

The euro continued to fall against the US dollar yesterday, reaching another local low. A signal to sell the euro from the 1.1723 level appeared in the first half of the day. If you look at the 5-minute chart, you will see how the bulls protected this area in its first test, however, sellers actively returned the pair to the 1.1723 level, forming an entry point into short positions further along the trend. They are trying to buy on a rebound from the 1.1688 area, where I also recommended opening long positions. A signal appeared to sell the euro below the 1.1688 area, following European Central Bank President Christine Lagarde's press conference, the test of which is on the reverse side, which leads to selling EUR/USD. I marked all entry points on the chart. 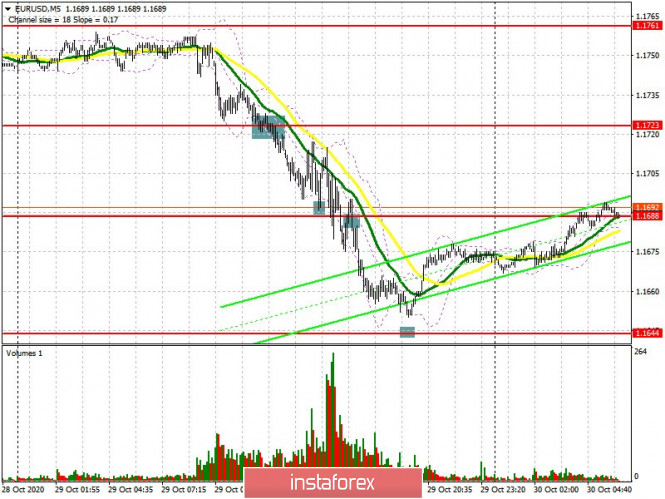 Bulls need to defend support at 1.1680 in the first half of the day, but there is little hope for it, since a rather large number of fundamental statistics for the eurozone countries will be released. The reports are expected to be bad, so the euro will be under pressure. You can buy from 1.1680 only if a false breakout is formed in order to go beyond and settle above the resistance of 1.1713, where the moving averages pass, playing on the side of sellers. Only a breakout of this level will strengthen the upward trend in EUR/USD and open a direct road to the high of 1.1754, where I recommend taking profits. If the bulls are not active in the support area of 1.1680, then it is best to postpone long positions until we have tested a low of 1.1651, subject to forming a false breakout there, or buy EUR/USD only for a rebound from the new local low of 1.1617, counting on an upward correction of 15 -20 points within the day.

Sellers should protect resistance at 1.1713, just above which the moving averages pass, playing on the side of the bears. Considering that the trend is downward, it is better to expect that it will continue today, since there isn't much to expect from today's eurozone fundamental reports. Forming a false breakout in the 1.1713 area produces a new entry point for short positions, and the main target will be a breakout and being able to settle below the 1.1680 level. Testing it from the bottom up, similar to yesterday, creates an additional signal to open short positions in euros, which will lead to a larger sale in the area of a low of 1.1651. A breakthrough of this area and testing it from the bottom up will form a new sell signal and will open a direct road to the next target area of 1.1617, which is where I recommend taking profits. However, before opening short positions at the lows, make sure that there is no divergence on the MACD indicator, since it's the end of the month and sellers can take profits, which could cause the euro to grow. If the pair rises above 1.1713 and bears are not active, I recommend postponing short positions and selling the euro immediately on a rebound from the resistance of 1.1754, counting on a correction of 15-20 points within the day. 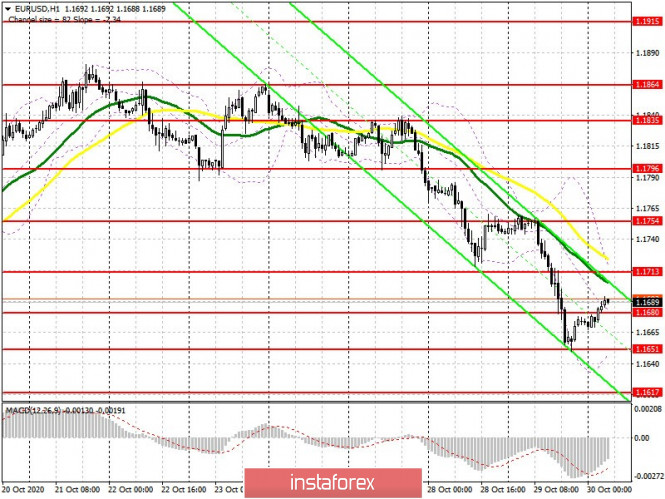 Trading is carried out below 30 and 50 moving averages, which indicates the presence of the bear market.