A good signal to buy the euro appeared yesterday morning, which I mentioned in my afternoon review and also where I recommended opening long positions while expecting the pair's upward correction to the 1.1793 level, which happened. As a result, the upward movement was around 50 points. If you look at the 5-minute chart, you will see that it was possible to take advantage of the rebound from resistance at 1.1796 and also sell the euro while expecting a small correction, the likelihood of which I also mentioned in yesterday's forecast. 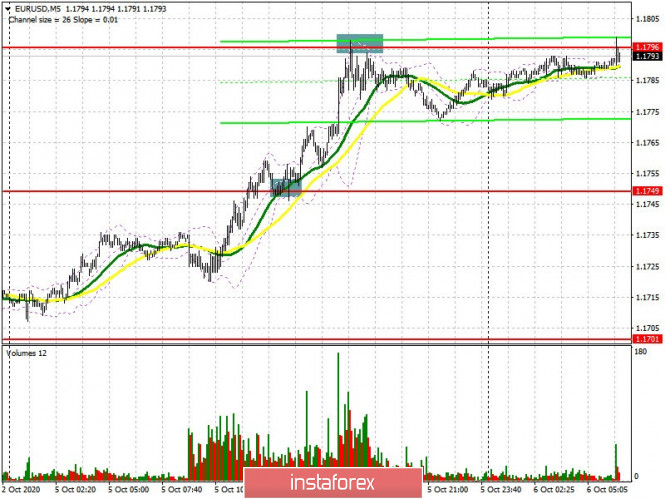 At the moment, the bulls have coped with the task set at the beginning of the week and the pair's succeeding growth will entirely depend on their behavior at the 1.1796 level. In case of a breakout and consolidation above this range, similar to yesterday, as was the case with the 1.1749 area, you can open new long positions in order to continue the upward correction already in the area of new highs at 1.1833, where I recommend taking profits. The 1.1868 area will be a distant target. Since important fundamental data will not be published today, everyone will focus on the Eurogroup meeting, at which a plan for the distribution of the EU recovery fund will be discussed. This could support the euro. In case of negative news and EUR/USD moves down, it is best not to rush into buy positions, but to wait until support at 1.1749 has been updated, where you can open long positions if a false breakout appears. Moving averages that play on the buyer's side also pass there. In case the pair does not sharply move from this level, I recommend postponing longs until the low of 1.1701 has been tested, where you can expect the euro to quickly rebound by up to 20-30 points during the first test.

The Commitment of Traders (COT) report for September 29 recorded a reduction in both long and short positions, which led to a decrease in the delta. Apparently, the lack of guidelines and a surge in the incidence of coronavirus in Europe discouraged major players from building up long positions in the euro, but no one is in a hurry to buy the US dollar either because of the upcoming presidential elections in the United States. Thus, long non-commercial positions decreased from 247,049 to 241,967, while short non-commercial positions decreased from 56,227 to 53,851. The total non-commercial net position also decreased to 188,116, against 190,822 a week earlier. which implies that new players are taking a wait-and-see approach, however, bullish sentiments for the euro remain rather high in the medium term. The more the euro falls against the US dollar, the more attractive it is for new investors.

To open short positions on EUR/USD. you need:

Sellers of the euro need to protect resistance at 1.1796, and a false breakout on it will be a signal to open short positions in the pair. An equally important goal is to return support at 1.1749, settling below this level will form a larger entry point to short positions and will also return control to sellers, allowing them to reach the 1.1701 area, where I recommend taking profits. Support at 1.1656 will be a distant target. If European Central Bank President Christine Lagarde's speech supports the euro, and the bears retreat from resistance at 1.1796, it is best not to rush to sell, but wait for the quote to rise to a new resistance at 1.1833, or sell the euro immediately on the rebound from the high of 1.1868, counting on a correction of 20 -30 points within the day. 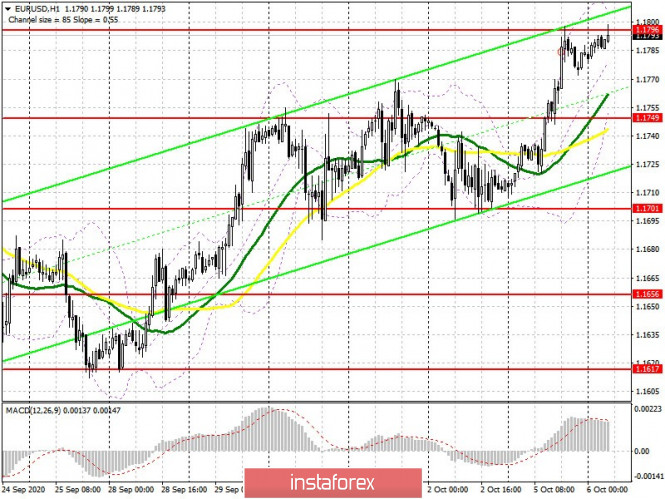 Trading is carried out above 30 and 50 moving averages, which indicates a continuation of the upward correction of the euro.