Yesterday afternoon I paid attention to selling after forming a false breakout from the 1.1796 level, which happened. If you look at the 5-minute chart, you will see how the bears started to be more active after trying to get out of this resistance, afterwards the pair returned to the area below 1.1796. Another signal for continuing the downward trend in the euro appeared yesterday afternoon. You can see how the bulls are testing the 1.1796 area from the bottom up, forming an excellent entry point for short positions, afterwards the price fell to the target level of 1.1749. 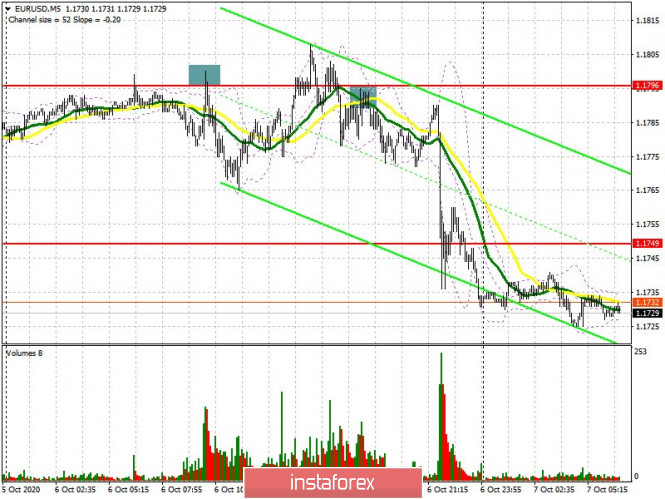 Buyers of the euro need to reclaim that range, which they missed at the beginning of the Asian session. Forming a breakout and settling on the 1.1749 level, and testing it on the reverse side, forms a good entry point into long positions, the main goal of which will be to return to the weekly highs of 1.1796, where I recommend taking profits. Resistance at 1.1833 will be a distant target, and it requires good fundamental support, which is not yet available. If the euro is still under pressure, and we still have all the conditions for that, then it is best not to rush to buy, but to wait until the 1.1701 area has been updated and buy EUR/USD there only if a false breakout appears. If there is no bullish activity there, I recommend postponing buy positions until we test the low of 1.1656, where you can open long positions immediately on a rebound, counting on a correction of 20-30 points within the day.

The Commitment of Traders (COT) report for September 29 recorded a reduction in both long and short positions, which led to a decrease in the delta. Apparently, the lack of guidelines and a surge in the incidence of coronavirus in Europe discouraged major players from building up long positions in the euro, but no one is in a hurry to buy the US dollar either because of the upcoming presidential elections in the United States. Thus, long non-commercial positions decreased from 247,049 to 241,967, while short non-commercial positions decreased from 56,227 to 53,851. The total non-commercial net position also decreased to 188,116, against 190,822 a week earlier. which implies that new players are taking a wait-and-see approach, however, bullish sentiments for the euro remain rather high in the medium term. The more the euro falls against the US dollar, the more attractive it is for new investors.

To open short positions on EUR/USD. you need:

Bears worked well in regards to yesterday's scenario for selling, and US President Donald Trump's statement that he once again refuses to accept the US $2.4 trillion aid package offered by the Democrats increased the pressure on the pair. Now the bears need to protect resistance at 1.1749, where forming a false breakout along with testing the moving averages, which are now playing on the side of the euro sellers, will lead to producing a good entry point to short positions while aiming to pull down EUR/USD to the area of the low of 1.1701. A more important task will be to break through and settle below this range, which will only pull down the euro to a low of 1.1656, where I recommend taking profit. In case bears are not active at the 1.1749 area in the morning, it is best not to rush to sell, but to wait until 1.1796 has been updated and open short positions from there immediately for a rebound, counting on a correction of 20-30 points within the day. 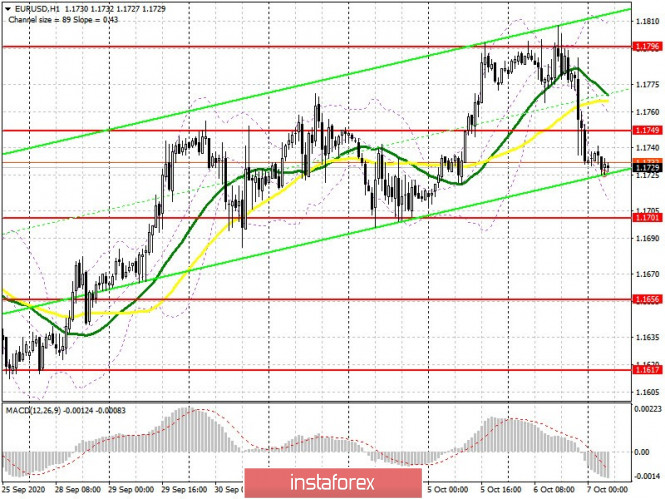 Trading is carried out below 30 and 50 moving averages, which implies that the euro might be under pressure again.

If the euro grows in the first half of the day, the upper border of the indicator at 1.1805 will act as resistance. To continue the bearish sellers market, a breakout of the lower boundary of the indicator in the 1.1705 area will be required.