EUR/USD: plan for the European session on October 15. COT reports. Bears are pulling the market over to their side. Aim for

Yesterday, buyers of the euro tried to retrieve resistance at 1.1756 and even formed a signal from it to buy the euro, but, unfortunately, a strong upward movement did not take place. If you look at the 5-minute chart, you will see how the bulls managed to settle above 1.1756 and defended this level by testing it from top to bottom, trying to build a new wave of growth. Sellers regained control towards the end of the US session, forming a signal to sell the euro by testing it from the bottom up at the 1.1756 level, but so far this setup has not led to a good downward movement. 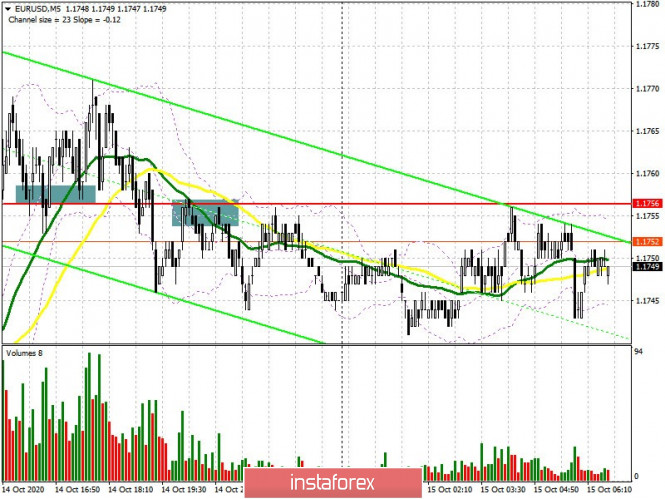 Nothing has changed from a technical point of view. Buyers are still focused on resistance at 1.1756, and settling above this level forms a good entry point into long positions while counting on the euro's succeeding growth and also an update of a high at 1.1789. The 1.1824 level will be a distant target, where I recommend taking profits. If the pair is under pressure in the first half of the day since we don't have important fundamental statistics, there is no need to rush to open long positions. Forming a false breakout at the 1.1722 level will be a signal to buy EUR/USD. If bulls are not active at this level, then I recommend postponing long positions until we have updated the low of 1.1688, counting on a correction of 20-30 points within the day. 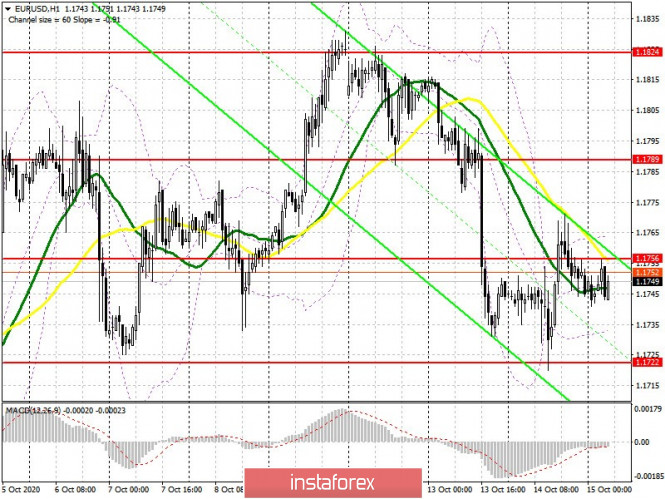 The bears managed to defend resistance at 1.1756 yesterday afternoon, however the downward movement has occurred. Sellers will have the advantage as long as trading is below this range. Forming the next false breakout at the 1.1756 level will be a signal to open short positions in EUR with the goal of returning to the support area of 1.1722. However, a much more important task is to break out and settle below this range, testing it from the bottom up forms just an excellent entry point for short positions with the goal of pulling down the euro to a low of 1.1688, where I recommend taking profits. In case bears are not active at 1.1756, it is best to postpone sell positions until a larger resistance at 1.1789 has been tested, from where you can open short positions immediately on a rebound, counting on a correction of 20-30 points within the day.

Trading is carried out in the area of 30 and 50 moving averages, which again indicates a confusion between buyers and sellers.

Interesting? Write a comment below.
 #EUR/USD: plan for the European session on October 15. COT reports. Bears are pulling the market over to their side. Aim for
Forward 
Backward 