The British pound continues to rise this morning, above the 76.4% Fibonacci level. The Marlin oscillator, which has penetrated into the growing trend zone, helps in this situation. The 1.3025 target at the Fibonacci level of 61.8% has been opened. The basic branch of the Fibonacci grid is taken from the movement on December 13, 2019-February 28, 2020. As long as it remains active. 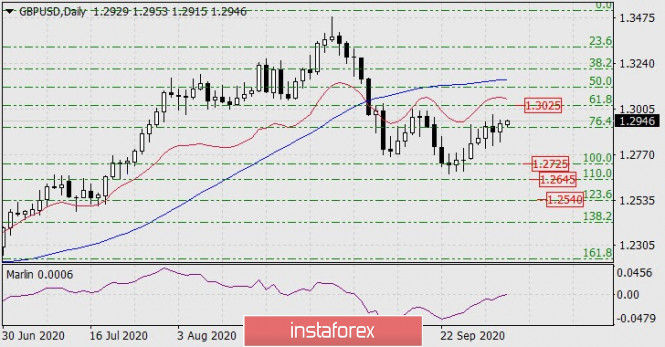 The price has settled at the 76.4% Fibonacci level on the four-hour chart, the Marlin oscillator is in a neutral position. But a little earlier, its signal line rebounded twice from the trend border in the direction of growth, which increases the likelihood of growth in both the indicator and price. Aim for 1.3025. Larger growth is associated with higher fundamental risks such as the health of US President Donald Trump and a tough Brexit.