The USD/JPY pair slightly dropped as US stock indices closed mixed on Friday, but the pair remained close to the balance indicator line and had a clear intention to attack it on Monday. Japanese and Chinese economic data came out in the morning. China's GDP increased by 4.9% y/y in the third quarter against the expected 5.5% y/y, the quarterly growth was 2.7% against the forecast of 3.2% and 11.5% in the second quarter... Industrial production rose by 6.9% in August against expectations of 5.8%, retail sales added 3.3% (forecast 1.7%), and unemployment dropped to 5.4% from 5.6%. The Japanese trade balance weighed on investors - the September balance reached 0.48 trillion. yen against the forecast of 0.85 trillion. Asian stock indices did not dare to grow on such data, now it is up to European and US indices. 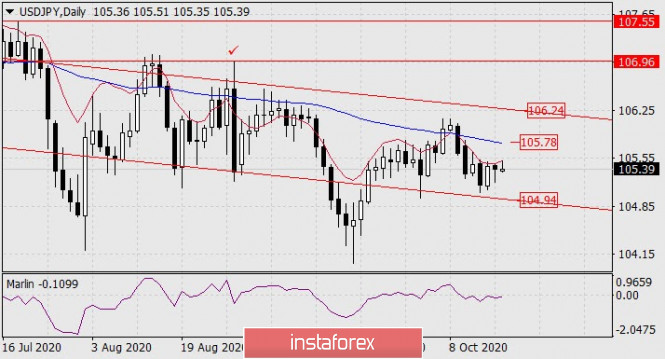 The problem in Europe comes from Brexit. The negotiator from the EU, Michel Barnier, needs to obtain an EU mandate for the final negotiations to a conclusion in the treaty. The only thing to do is to wait, in two weeks the situation will be completely resolved.

The currency pair's situation is decreasing on the daily chart, the target is 104.94. 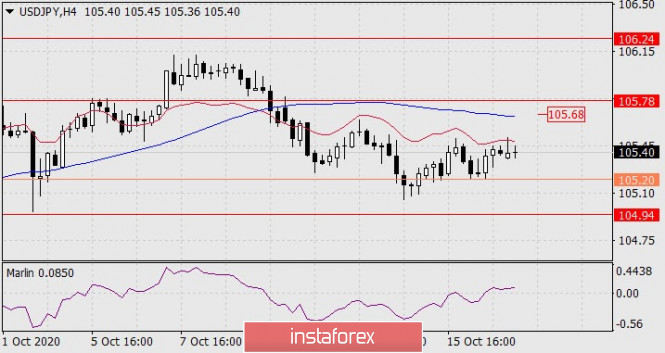 The situation is neutral on the four-hour chart - Marlin is in the growth zone, and the price is below the indicator lines. The growth in the price before it enters the MACD line on the daily chart (105.78) seems to be drifting. The price falling below the signal level of 105.20 opens the target at 104.94. And formally it is also a decline within the framework of being able to roam freely. The uncertainty from the previous week continues.