GBP/USD: plan for the European session on October 1. COT reports. Buyers resisted the pressure from sellers and returned

After several unsuccessful attempts to pull down the pound below support at 1.2819 in the first half of the day, buyers of the pound took the initiative and created a good signal to enter long positions. Let's figure it out. On the 5-minute chart, you can see how the bulls achieved a false breakout after failing to test support at 1.2819, and then they started to actively buy the pound. The bears tried to defend the resistance area of 1.2869, but the correction from there was no more than 25 points, afterwards there was a breakthrough of this range and GBP/USD sharply grew to a high of 1.2925, from where it was necessary to sell the pound immediately on a rebound, which brought about 30 points of profit. Unfortunately, we could not wait for the quote to return and test the 1.2869 level after its breakout, so I missed the movement from 1.2869 to 1.2925. 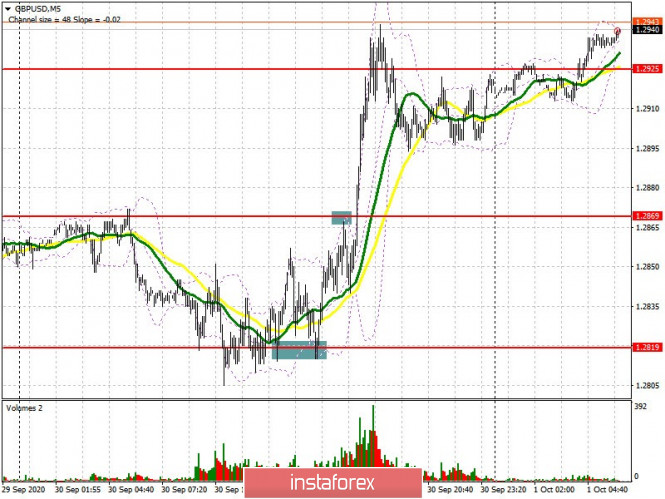 At the moment, the situation in the pair is rather delicate. The 1.2925 level has been repeatedly smeared. Forming a false breakout on it in the first half of the day and returning to this area will be a good signal to buy the pound in order to continue the upward trend so the quote will rise towards the high of 1.2995, which is where I recommend taking profits. The 1.3089 area is a distant goal, and we can only reach it with good news on Brexit. In case GBP/USD falls, you can also look at long positions after testing 1.2869, which is where the moving averages pass, playing on the side of buyers. It is possible to buy the pound immediately on a rebound from a larger low of 1.2819, counting on a correction of 30-40 points within the day. The lower border of the new ascending channel is also located there.

Pound sellers have a very simple task. In order to return the market over to their side, it is necessary to pull down GBP/USD below 1.2925 and test it from the bottom up, which forms a good entry point for short positions. The initial goal will be to update support at 1.2869, which coincides with the moving averages and acts as the middle of the horizontal channel. Consolidating below this range will cause the pound to fall to the week's low in the area of 1.2819, which is where I recommend taking profits. In case the pair grows further, it is best not to rush to sell, but to wait until a high of 1.2995 has been updated, from where you can sell the pound immediately on a rebound based on a 30-40 point correction within the day. A more powerful resistance level, in case bears are not active at 1.2995, is located near the 31st figure - at 1.3089. 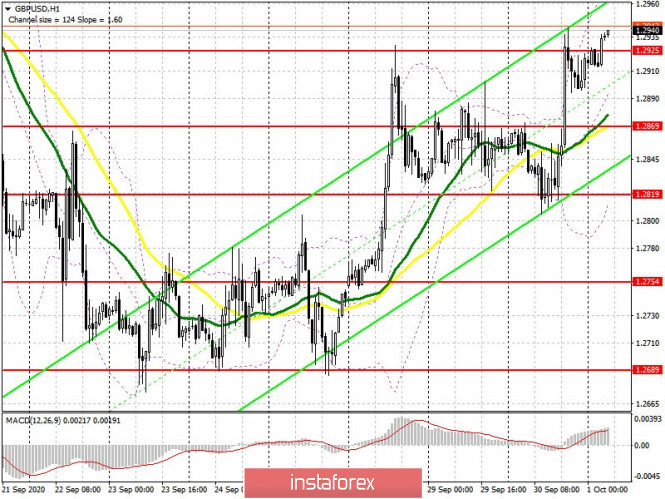 Trading is carried out above 30 and 50 moving averages, which indicates that the upward correction will continue for the pair.