GBP/USD: plan for the European session on October 15. COT reports. Pound buyers believe in conclusion of trade deal on Brexit

There was an excellent entry point to sell the pound from the 1.3065 level yesterday afternoon, because after the first breakout of resistance at 1.3009, it was not possible to wait for it to be tested from the reverse side. Let's take a look at the 5-minute chart. The bulls began to take profits after testing resistance at 1.3065, which caused the pound to immediately fall to the support area of 1.3009, where it was then possible and necessary to open long positions in anticipation of another wave of the pound's growth. However, there was no major upward movement. 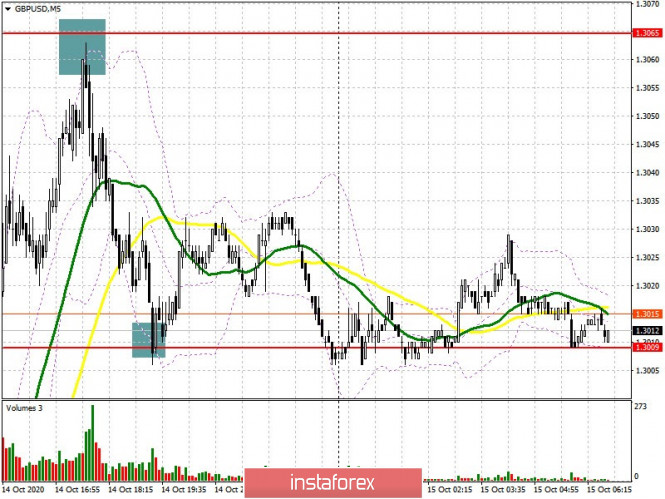 The technical picture has slightly changed at the moment. Buyers will focus on resistance at 1.3059 in the first half of the day, getting the pair to settle in this area will open the possibility for a new wave of growth for GBP/USD in the area of a high of 1.3154. Good news on Brexit will provide support to the pound, which will lead to a test of resistance at 1.3234, where I recommend taking profits. An equally important task is to protect support at 1.2988, just below which the moving averages pass. Forming a false breakout at this level will be a signal to open new long positions, counting on an upward trend. In case bulls are not active in this range, it is better not to rush to buy, but to wait for news on Brexit. In this case, the nearest major support levels will be seen in the area of 1.2923 and 1.2865, from where you can consider buy positions for a rebound upon reaching it, counting on a correction of 20-30 points within the day.

The Commitment of Traders (COT) report for October 6 showed a minimal increase in short non-commercial positions from 51,961 to 51,996. Long non-commercial positions slightly rose from 39,216 to 40,698. As a result, non-commercial net position remained negative and reached -11,298 against -12,745, which indicates that sellers of the pound retain control and also shows their slight advantage in the current situation. The higher the pair grows, the more attractive it is to sell.

Sellers need to defend resistance at 1.3059, but a lot will depend on news on the trade deal and on the decisions taken at the Eurogroup meeting. Forming a false breakout at 1.3059 generates a signal to sell the pound, but bad news on Brexit is necessary to exert pressure on the pair. After consolidating below support at 1.2988, we can finally expect the pair to fall and return to the 1.2923 area. I recommend taking profit in the 1.2865 area, since large buyers are most likely present in that area. In the absence of activity in the resistance area of 1.3059, it is best to postpone short positions until the resistance at 1.3154 has been tested, and you can also sell immediately on a rebound from the high of 1.3234. At least you can expect the bull market to stop at these levels. 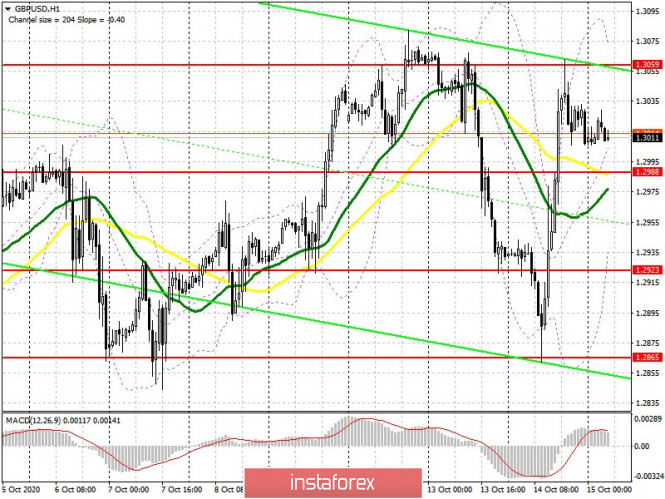 Trading is carried out above 30 and 50 moving averages, which indicates another attempt by the bulls to take control of the market.