GBP/USD: plan for the European session on October 19. COT reports. Traders leave the pound as uncertainty grows on Brexit

The bulls had to defend support at 1.2865 last Friday afternoon, but this level was not reached, and we missed it by around a dozen points. The same cannot be said about the resistance of 1.2945, from which I recommended opening short positions. Speeches by British Prime Minister Boris Johnson on the Brexit trade deal are weighing on the pound, which could decline earlier this week.

There were no particular changes in the futures market, but it is worth noting the fact that traders are closing positions and prefer to be out of the market. Bears are still in control of the situation, and the horizontal channel, in which the pair has been spending the last few weeks, has remained. Uncertainty about Brexit and the prospects for the recovery of the British economy, together with risks that the Bank of England might impose negative risks and the introduction of restrictive and quarantine measures due to the surge in the number of coronavirus infections, will continue to restrain demand for the pound and put pressure on it. The Commitment of Traders (COT) reports for October 13 showed that both long and short non-commercial positions have decreased. Long non-commercial positions declined from 40,698 to 36,195. At the same time, short non-commercial positions significantly dropped from 51,996 to 45,997. As a result, the negative value of the non-commercial net position slightly increased to -9 802 , against -11,298 a week earlier, which indicates that sellers of the British pound retain control and also shows their slight advantage in the current situation. 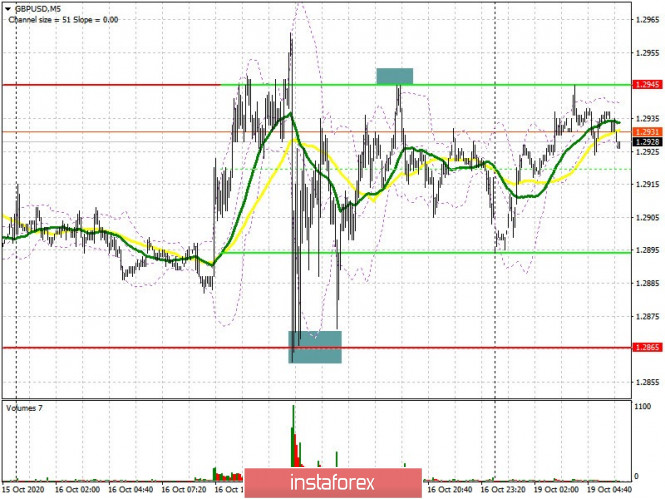 From a technical point of view, there have been no global changes in the pair. Buyers of the pound will continue to focus on resistance at 1.2945, since they failed to go above this area last Friday. Getting the pair to settle at this level will open the possibility for a new wave of GBP/USD growth in the 1.3007 area, but a lot will depend on how the Brexit issue will progress. We can expect a slight decrease in tension on this issue, which will provide short-term support for the pound at the beginning of the week. Therefore, settling above 1.3007 will lead to a test of the 1.3080 high, where I recommend taking profits. Protecting support at 1.2865, which the bulls coped with at the end of last week, will also be an important task. In case the pair repeatedly falls there, and this will be the fifth consecutive test, forming a false breakout in this area will be a signal to open new long positions in hopes to strengthen GBP/USD. In case bulls are not active in this range, it is better not to rush to buy, but to wait until the nearest large support level in the 1.2807 area has been tested. You can also open long positions immediately on a rebound from the low of 1.2749, counting on a correction of 20-30 points within the day.

Sellers need to defend resistance at 1.2945, but a lot will depend on news regarding the Brexit trade deal, since we do not have fundamental reports on Monday. Forming a false breakout at 1.2945 creates a sell signal for the pound, but big bearish pressure requires bad Brexit news, similar to the one we heard from Boris Johnson last Friday. We can only expect a significant fall from the pound when we have gotten the pair to settle in the area below support at 1.2865, afterwards it could return to the 1.2807 area. A low of 1.2749 will be a distant target, which is where I recommend taking profit. In case the pair grows in the first half of the day and there is no activity in the resistance area of 1.2945, it is best to postpone short positions until the high of 1.3008 has been tested, where you can sell the pound immediately on a rebound, counting on a 20-30 point correction within the day. 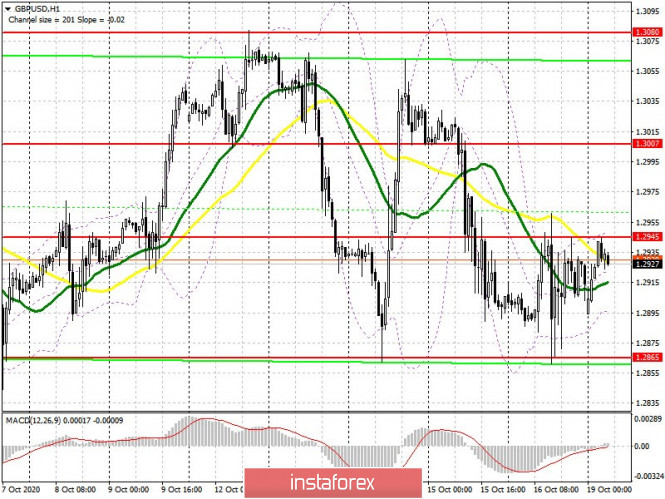 Trading is carried out in the area of 30 and 50 moving averages, which indicates how buyers and sellers find the pair's succeeding direction quite difficult.