GBP/USD: plan for the European session on October 22. COT reports. UK ready to make concessions on the Brexit trade deal.

The news that the UK wants to resume negotiations and is ready to make concessions in the trade deal has supported the British pound and caused it to sharply grow yesterday afternoon. Let's take a look at the 5-minute chart and talk about where you can and should buy and sell the pound. In my review for the afternoon, I paid attention to resistance at 1.3080 and to buy above this level. The chart shows how the bulls are trying to break out and settle in this range, which forms a good entry point into long positions, and also brings around 70 points of profit. Selling on the rebound from 1.3154 (which I also recommended to do) was not good, but the bears also managed to wait for their correction. 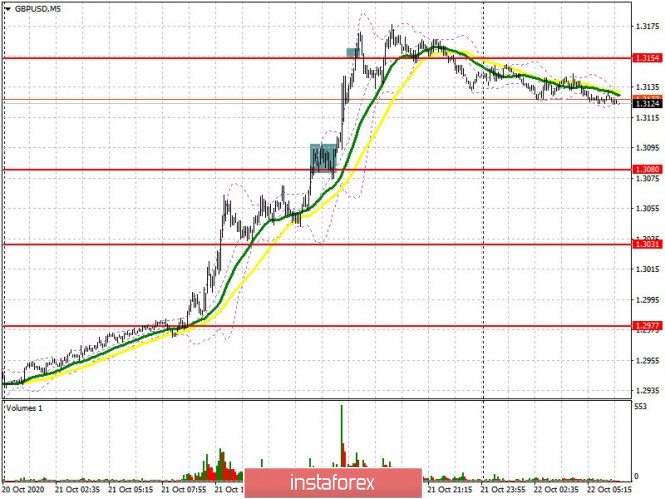 I have revised the nearest levels. The main task of the bulls during the first half of the day is to form a breakout and to settle above resistance of 1.3144, similar to yesterday's purchase, which I analyzed a little higher. This forms a good signal to open long positions as the pound continues to rise to 1.3192. The next target will be resistance at 1.3234, where I recommend taking profits. However, do not rush to buy the pound and add long positions from the high of 1.3192, since divergence is forming on the MACD indicator, this could limit the upward potential of the pair. The bull market will only be able to progress further if we receive more specific news about what kind of concessions the UK is ready to make. A more optimal scenario for opening long positions will be a downward correction from the GBP/USD pair to the support area of 1.3096, which is where moving averages will meet, playing on the side of buyers. However, you can only buy the pound if a false breakout appears, afterwards the pair could rapidly rise to weekly highs. If it is not there, and in case bulls are not active at 1.3096, then I recommend postponing buy positions until a larger low of 1.3044 has been updated, where you can open long positions immediately on a rebound, counting on a correction of 30-40 points within the day.

Pound sellers were clearly taken aback by such news from the UK government, which led to their abrupt withdrawal from the market. At the moment, bears can only hope to form a false breakout in the resistance area of 1.3144, which will be the first signal to open short positions in the pound. A more important task is to break and settle below support at 1.3096, which will raise the pressure on the pair and lead to removing the buyers' stop orders, causing the pair to fall to a low of 1.3044, where I recommend taking profits. In case the pound grows further, according to the newly formed trend and the breakdown of resistance at 1.3144, one can count on divergence, which is now being formed on the MACD indicator. However, it is better not to rush to sell, but to wait until weekly highs have been updated and to test the 1.3192 level, where you can open short positions immediately on a rebound, counting on a correction of 30-40 points within the day. If the pound does not rapidly fall from this level, then it is best to postpone short positions until a high of 1.3234 has been updated. 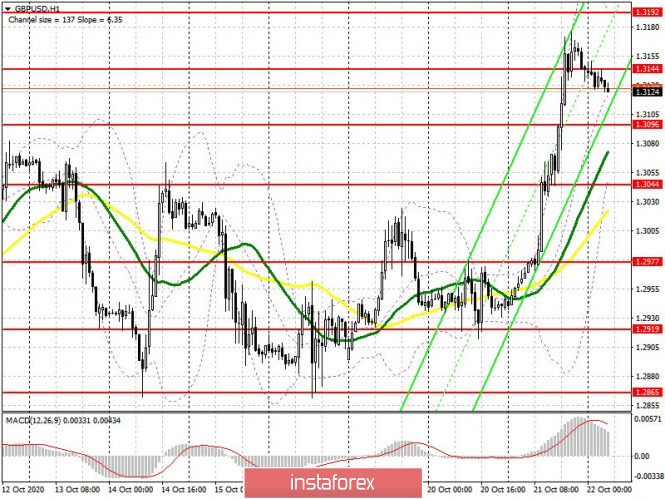 Trading is carried out above 30 and 50 moving averages, which indicates a resumption of the bull market.