GBP/USD: plan for the European session on October 23. COT reports. Pound buyers not in a rush to return to the market, will

A rather excellent signal for selling the pound appeared yesterday morning. If you look at the 5-minute chart, you will see a false breakout at 1.3143, which led to producing a good entry point to short positions, afterwards the pair returned to support at 1.3096. There was a rather serious struggle for this level in the afternoon. Settling at 1.3096 caused the pound to slightly increase, but then the bears took the market under their control. Several tests of the 1.3096 level became a clear signal to open new short positions in order to sustain the downward correction. I marked all entry points on the chart. 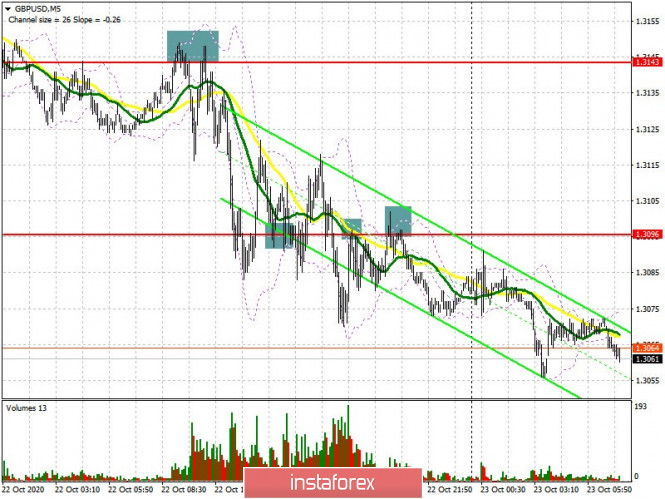 The bulls have the main task of forming a breakout and settling above the resistance of 1.3096 in the first half of the day, which they missed yesterday. Testing this level from top to bottom forms a good signal to open long positions in order for the British pound to rise to the high of 1.3143. The next target will be resistance at 1.3192, which is where I recommend taking profit, since it is unlikely for the price to go beyond the 32nd figure today. The bull market can only progress further if we receive specific news about what kind of concessions the UK is willing to make in the talks. A more optimal scenario for opening long positions would be a downward correction of the GBP/USD pair to the support area of 1.3035. You can buy the pound there on a rebound counting on a correction of 15-20 points. If there is no activity at this level, it is best to abandon buy positions until the 1.2977 low has been updated, testing it would jeopardize the pound's upward trend that was observed since the beginning of this week.

Pound sellers are recovering from yesterday's rally. At the moment, they are aiming for support at 1.3035, settling below it forms a good signal to open short positions in order to sustain the current downward trend, while also anticipating for the pound to return to a low of 1.2977, which is where I recommend taking profits. In case the pound rises after the release of reports on activity in the manufacturing sector and services in the UK, I advise you not to rush to sell, but wait until a false breakout forms in the resistance area of 1.3096 and then you can sell the pound there. In case bears are not active at this level, you can safely open short positions on a rebound from resistance 1.3143, counting on a correction of 30-40 points within the day. 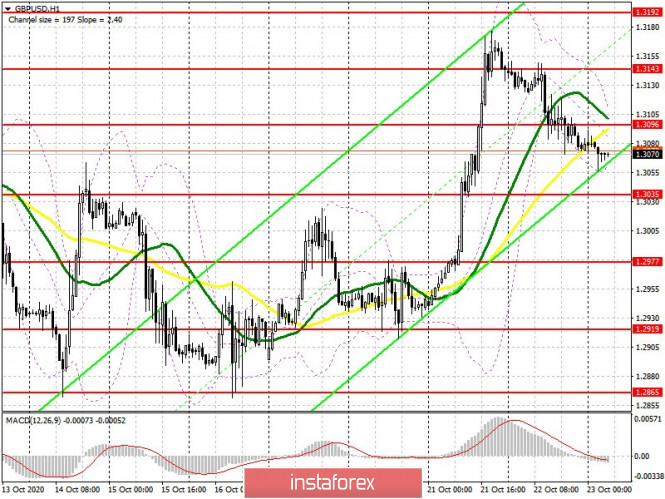 Trading is carried out below 30 and 50 moving averages, which indicates that the pressure on the pair remains.

In case the pound rises, the upper border of the indicator at 1.3110 will act as a resistance.

Interesting? Write a comment below.
 #GBP/USD: plan for the European session on October 23. COT reports. Pound buyers not in a rush to return to the market, will
Forward 
Backward 