Last Friday, the bulls made several unsuccessful attempts to continue pushing the pound after the PMI data, but then the pair was under pressure again, which resulted in its sell-off. However, judging by the latest data, the pound's appeal is gradually recovering, and this week we may see a new wave of growth in the pair, provided that the parties manage to agree.

Significant changes are visible in the futures market, which play on the side of the buyers of the pound. The fact that traders are closing short positions indicates the likelihood of a new wave of growth in the medium term. And although bears still have control of the situation, their preponderance is at a minimum. The only thing that holds buyers back is the uncertainty about Brexit and the prospects for a recovery in the UK economy. Problems with the risk of introducing negative interest rates and the introduction of restrictive and quarantine measures due to the surge in the number of coronavirus infections have so far faded into the background. The Commitment of Traders (COT) report for October 20 showed a reduction in short positions and a sharp increase in long positions. Long non-commercial positions rose from 36,195 to 39,836. At the same time, short non-commercial positions fell from 45,997 to 41,836. As a result, the negative value of the non-commercial net position slightly increased and reached -2,000, against - 9,802 a week earlier, which indicates that the sellers of the pound retain control and also shows their minimal advantage in the current situation.

Buyers of the pound need to take the resistance of 1.3053 as soon as possible, because the succeeding correction will depend on it. Settling at this level forms a signal to open long positions in GBP/USD and will open up the opportunity for a new wave of growth in the area of Friday's high at 1.3120, but much will depend on how Brexit will progress. A compromise will provide good support for the pound. Therefore, settling above 1.3120 will lead to a test of the highs of 1.3174 and 1.3234, where I recommend taking profits. An equally important task is to protect support at 1.2977. You can open long positions from this level immediately on a rebound, counting on a correction of 20-30 points within the day. In case bulls are not active in this range, it is better not to rush to buy, but to wait for the test of the next major support level in the 1.2919 area.

Sellers need to defend the resistance of 1.3053, but much will depend on news on the Brexit trade deal, since we do not have any UK fundamental reports at our disposal. Forming a false breakout at 1.3053 generates a signal to sell the pound, but we need bad news on Brexit for a large bearish pressure. The nearest target of the bears is support at 1.2977, but the pound can only fall if the pair settles below this level, and then it might return to the area of 1.2919 and 1.2865, which is where I recommend taking profits. If the pair grows in the first half of the day and there is no activity in the resistance area of 1.3053, it is best to postpone short positions until last Friday's high at 1.3120 has been tested, afterwards you can sell the pound immediately on a rebound, counting on a correction of 20-30 points within the day. 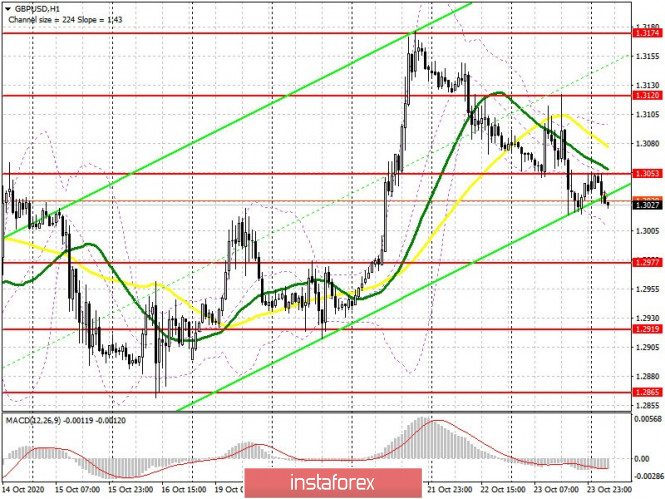 Trading is carried out just below the 30 and 50 moving averages, which indicates a slight advantage for sellers of the pound.