GBP/USD: plan for the European session on October 27. COT reports. High volatility to continue for the pound

In yesterday's afternoon review, I drew attention to the struggle for the 1.3052 level and recommended to act from it. It was not possible to wait for a buy signal, because after the breakout of 1.3052, the bulls failed to protect this level, allowing the pair to return to the area below this range. But testing 1.3052 from the bottom up formed a good entry point into short positions, afterwards the pound retreated by more than 50 points. 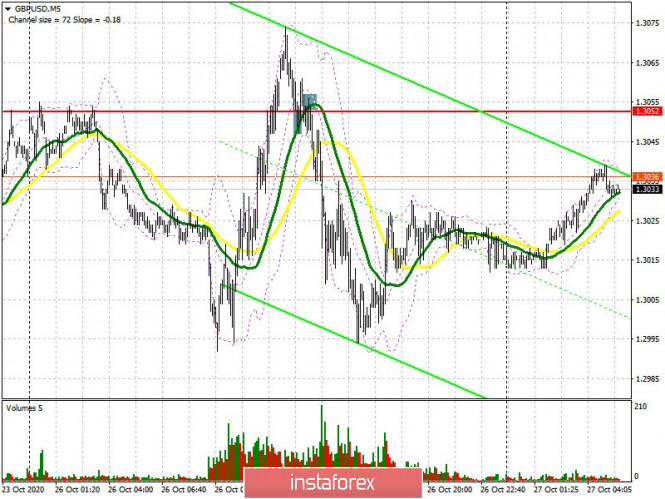 The situation is quite delicate at the moment, since it is not very clear whether the parties will be able to agree in the next few days or not. Any insider information will lead to a sharp movement of the pound in one direction or another. Buyers need to protect support at 1.3021, and forming a false breakout on it will be a signal to open long positions with the goal of returning to the area of yesterday's resistance at 1.3072. However, only a breakout and being able to settle at this level will lead to forming a good additional entry point into long positions, and could also lead the pound to highs of 1.3120 and 1.3174, where I recommend taking profits. In case GBP/USD falls below the 1.3021 level, it is best not to rush to buy, but to wait until the 1.2974 low has been updated, where you can open long positions only if a false breakout appears. I recommend buying GBP/USD immediately on a rebound in a large support at 1.2919, counting on a correction of 20-30 points within the day.

Sellers of the pound will focus on the breakout and settle below the intermediate support at 1.3021, as only this can increase the pressure on the pair and push it even lower to the 1.2974 level, where I recommend taking profits. A stronger bearish momentum will only emerge if disagreements persist in the UK-EU trade deal. Going beyond and settling below 1.2974 forms a good entry point for short positions in anticipation of updating the lows of 1.2919 and 1.2865, where I recommend taking profits. If the demand for the pound persists in the morning, then I do not recommend rushing with sell positions. It is best to open short positions from the resistance of 1.3072, subject to forming a false breakout there, or sell GBP/USD immediately after a rebound from the 1.3120 high, counting on a correction of 20-30 points within the day. 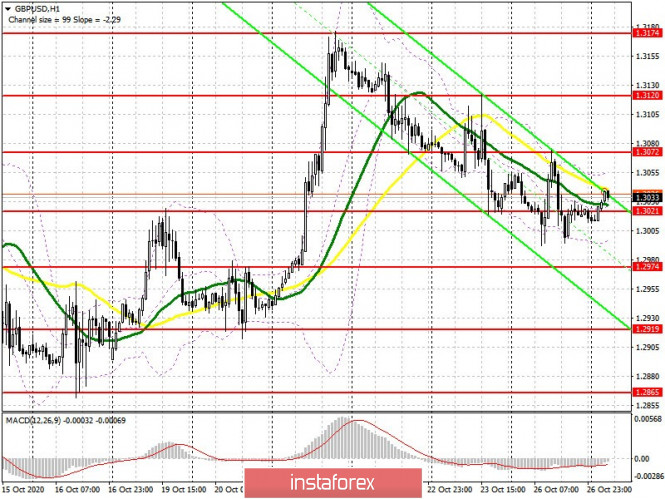 Trading is carried out in the area of 30 and 50 moving averages, which indicates some market uncertainty.

A breakout of the upper border of the indicator in the area of 1.3055 will lead to a new wave of growth of the pound. A breakout of the lower boundary at 1.3005 will increase pressure on the pair.