GBP/USD: plan for the European session on October 28. COT reports. Peace of mind for the pound. The pair cannot leave the

The pound formed an excellent sell signal yesterday afternoon, and I drew attention to the high probability of its appearance in my review. Let's take a look at the 5-minute chart and break down the trade. You can see how the bulls are approaching resistance at 1.3072 in the afternoon, and it is difficult to go above it. Each attempt to cling to this level leads to a quick return to the area below it. After some time, testing this area from the bottom up and closing below it led to forming a good entry point for short positions. The pound lost more than 40 points by the end of the day. 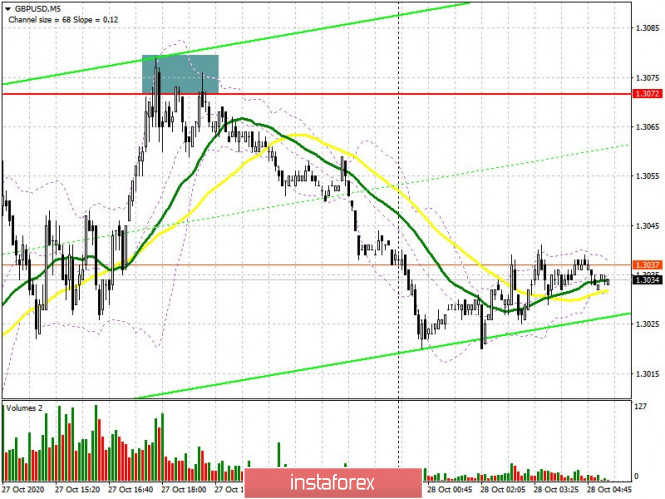 Everyone is waiting for decisions on the trade deal and any news related to it. Any insider information will lead to a sharp movement for the pound in one direction or another. Buyers still need to protect support at 1.2997, and forming a false breakout on it will be a signal to open long positions in order to return to yesterday's resistance at 1.3072. However, only a breakout and being able to settle at this level will result in producing a good additional entry point into long positions, and could also lead the pound to highs of 1.3120 and 1.3174, where I recommend taking profits. In case GBP/USD falls below the 1.2997 level, it is best not to rush into long deals, but to wait until the 1.2919 low has been updated, where you can open long positions only if a false breakout is formed. I recommend buying GBP/USD immediately on a rebound, but only in the area of large support at 1.2865, counting on a correction of 20-30 points within the day. You need to understand that in case we receive negative news on Brexit, trading against the newly formed trend even for a rebound from the mentioned levels will not be a completely correct decision.

Sellers of the pound will focus on the breakout and settle under the support of 1.2997, since this will increase the pressure on the pair and pull it down to the 1.2919 level, where I recommend taking profits. A stronger bearish momentum will only emerge if disagreements persist in the UK-EU trade deal. A break and being able to settle below 1.2919 forms a good entry point for short positions while expecting to update the lows of 1.2919 and 1.2865, where I recommend taking profits. If the pound is still in demand in the morning, then, just like yesterday, I do not recommend rushing with sell positions. It is best to open short positions from the resistance of 1.3072, subject to forming a false breakout there, similar to yesterday, or sell GBP/USD immediately on a rebound from the 1.3120 high, counting on a correction of 20-30 points within the day. 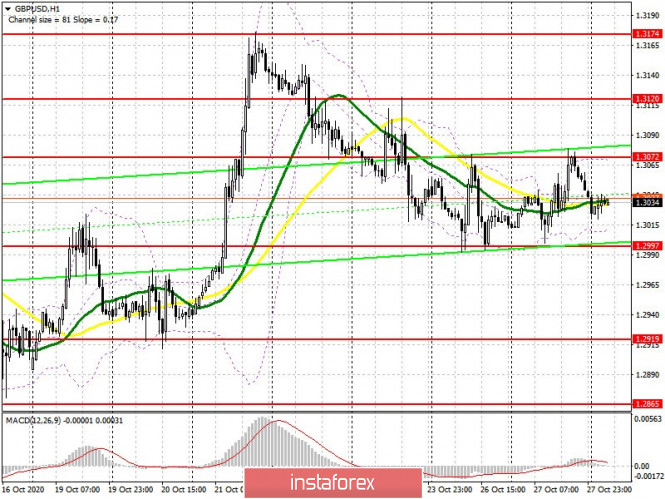 Trading is carried out in the area of 30 and 50 moving averages, which indicates some market uncertainty.

Interesting? Write a comment below.
 #GBP/USD: plan for the European session on October 28. COT reports. Peace of mind for the pound. The pair cannot leave the
Forward 
Backward 