GBP/USD: plan for the European session on October 29. COT reports. Pound buyers losing their nerves, no positive news on

The British pound showed its best side yesterday. It was not possible to earn money and wait for a signal to open short positions in the morning. The same cannot be said for the afternoon, where a great long entry point was formed. Let's take a look at the 5-minute chart and break it down. If you read yesterday's afternoon review, you will see that I advised you to open long positions immediately on a rebound from support at 1.2919, which is what happened. After the very first test of this level, the pound turned around and rushed back up to the resistance of 1.2997, allowing it to take more than 80 points of profit from the market. 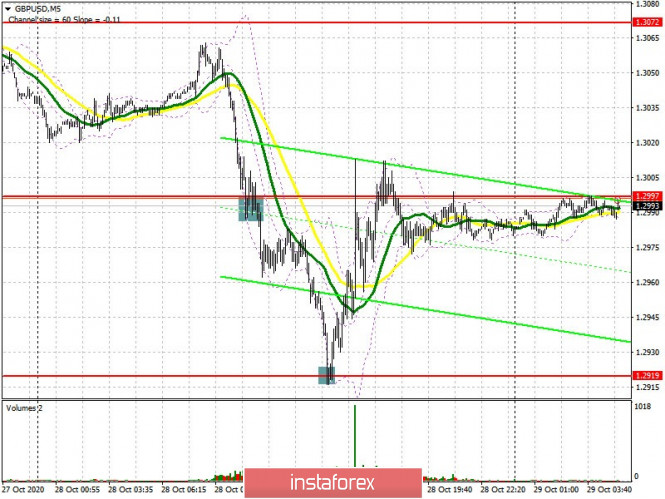 Now for the buyers and today's technical picture. The lack of Brexit news seems to put pressure on the bulls, and as long as the situation remains uncertain, the more likely it is for no compromise between the parties. All that buyers of the pound can expect now is to return resistance at 1.2997, since being able to settle above this level will lead to a buy signal that can return GBP/USD to the resistance area of 1.3058, where I recommend taking profits. A high of 1.3120 will be the next goal, but it will only be possible to reach it if we receive progress in trade talks between the UK and the EU. If the pressure on the pound persists in the first half of the day after the release of a number of fundamental reports on the UK, then I recommend opening long positions again, but only from a large local low of 1.2919, and only if a false breakout is formed there. In case bulls are not active at this level, you can buy GBP/USD from a more recent low of 1.2865, counting on a correction of 20-30 points within the day.

The primary task for pound sellers is to protect resistance at 1.2997. Forming a false breakout on it will be a signal to sell the pound in order to continue the current downward trend. Pessimistic news on Brexit could raise pressure on the pair, leading to another fall and a breakout of support at 1.2919. However, you can only open short positions from there, subject to being able to settle below this level and a reverse test from the bottom up, which forms an additional entry point into selling GBP/USD. In this case, aim for a low of 1.2865, where I recommend taking profits. In case GBP/USD grows above the resistance of 1.2997 in the first half of the day, against the background of the release of positive fundamental statistics for the UK, I recommend postponing short deals until we have tested a high of 1.3058, counting on a correction of 20-30 points. 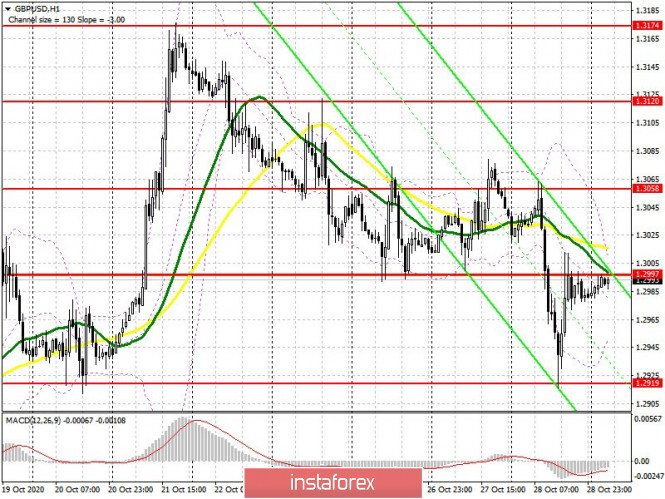 Trading is carried out slightly below the 30 and 50 moving averages, which indicates that the pressure on the pair remains.