Buyers of the British pound were desperately fighting for support at 1.2919 and they even managed to form a signal to buy the pound from it in the afternoon. Take a look at the 5-minute chart. You can see how several false breakouts of the 1.2919 support formed a good entry point into long positions, the growth was worth around 25 points, after which the bulls fizzled out. Falling under the 1.2919 level closer to the middle of the US session and testing this level from the bottom up formed a signal to sell the pound, afterwards the pair fell by around 40 points. 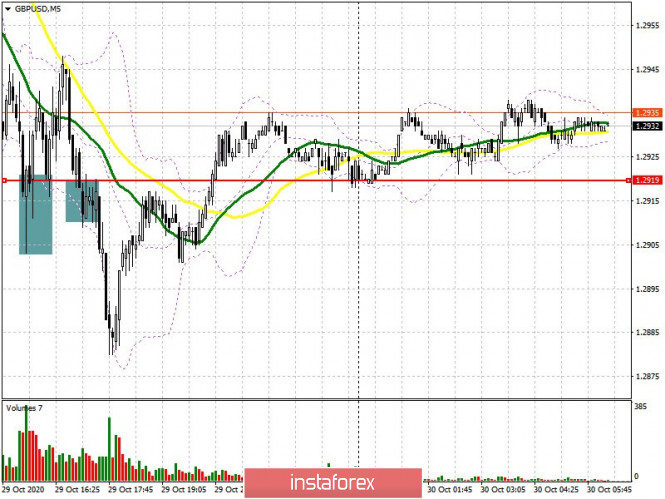 The technical picture has not changed much compared to yesterday. The lack of Brexit news weighs on both buyers and sellers. Buyers have a chance for a market reversal, and for this they need to prevent a breakout of support at 1.2917. Forming a false breakout on it will be the first signal to open long positions. If there is no activity there, I recommend postponing long deals until the 1.2865 low has been updated, which we did not reach yesterday. From there, you can open buy positions immediately on a rebound, counting on a correction of 20-30 points within the day. But it is possible to speak of a more probable recovery and a change in the trend once the pair has settled above the resistance of 1.2991, slightly below which the moving averages passes, playing on the side of the sellers of the pound.Testing the 1.2991 area on the reverse side forms a new entry point for long deals with the goal of updating highs of 1.3058 and 1.3120, where I recommend taking profits.

Bears aim to regain control of support at 1.2917. A breakout and being able to settle below this level will be a signal to open new short positions in sustaining the downward trend and with the main goal of updating a fairly large low of 1.2865, which has already been tested four times this month. A breakthrough of this range will cause GBP/USD to drop and reach a low of 1.2807 and 1.2749, where I recommend taking profits. Negative Brexit news and the absence of a trade deal could increase the pressure on the pair. In case of an upward correction, you can pay attention to forming a false breakout in the resistance area of 1.2991, which will be a signal to sell the pound in order to continue the current trend. 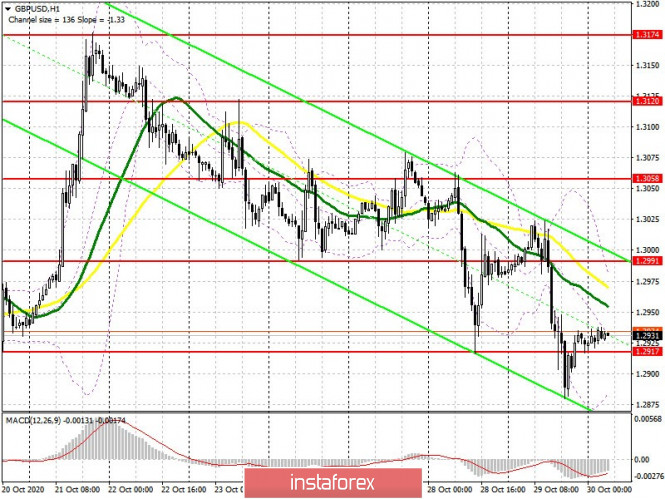 Trading is carried out slightly below the 30 and 50 moving averages, which indicates that the pair is still under pressure.