GBP/USD: plan for the European session on October 8. COT reports. Irish minister is not a hindrance to pound buyers who are

Yesterday's statements from the Irish Foreign Minister in regards to the Brexit trade deal put pressure on the British pound, but the bulls managed to protect support at 1.2863, creating a good signal from it in order to enter long positions. Let's figure it out. To begin with, let's recall selling from 1.2929 in the morning, where I advised you to open short positions when the pair returns to this range. Everything happened exactly point to point. If you look at the 5-minute chart, you will see how the bears waited until resistance was updated at 1.2929 and then they actively returned to the market, forming some pretty beautiful entry points. As a result, the first wave of downward movement brought more than 70 points of profit. Then, I paid attention to buying from the1.2863 in my afternoon forecast, but under the condition: "... I recommend waiting for a breakout of this range, the unsuccessful movement of the pair down, and only then, on returning and settling above 1.2863, perhaps closer to the second half of the US session...". And so it happened, and I marked the entry point for buy positions on the hourly chart. The upward movement was around 50 points, as a result of which the bulls managed to return to 1.2929. 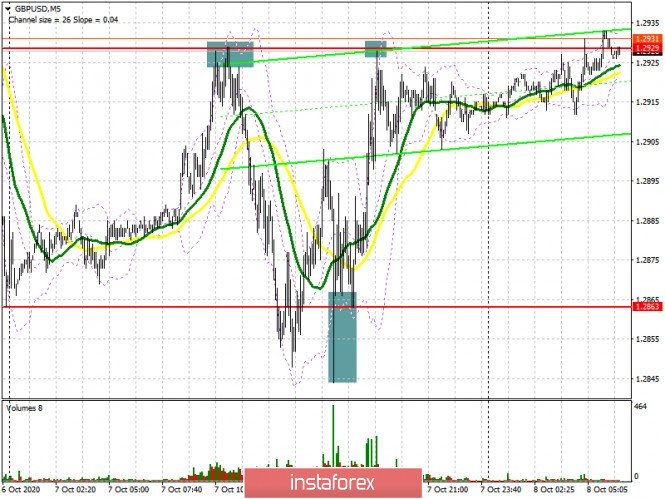 Now an important task for the pound buyers is to break through and settle above the resistance of 1.2929, only after that will it be possible to speak of an advantage, which forms an additional entry point into long positions with the main goal of updating this week's high at 1.3001, where I recommend taking profits. The 1.3089 area will be a distant goal. If the pair falls in the first half of the day, the bulls will have to think about protecting support at 1.2863, which has already been tested many times. Forming a false breakout at this level will be a signal to open long positions while expecting the pound to recover to the resistance area of 1.2929. If buyers of the pound are not active in the support area of 1.2863, then it is best not to rush to buy, but to wait until a larger low at 1.2807 has been updated, where it is best to open long positions immediately on a rebound, counting on a 30-40 point correction within the day.

Sellers of the pound have a simple goal. They need to pull down GBP/USD to the area below the 1.2863 level in order to maintain control of the market. The upside test of this area forms a good entry point for short positions. In this case, the 1.2807 area will be the nearest target for the bears, a breakdown of which will increase pressure on the pound, which will open a direct road to the low of 1.2749, where I recommend taking profits. But an equally important task is to protect resistance at 1.2929, which is where trade is currently taking place. You can sell the pound from this level, but only if a false breakout is formed with the main goal of returning to support at 1.2863. If bears are not active in this range, and it is likely, then it is best to postpone sell positions until a high of 1.3001 has been updated, counting on a correction of 30-40 points within the day. 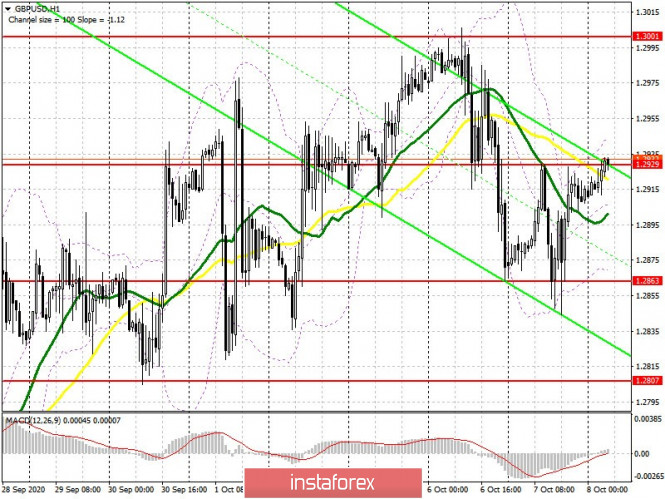 Trading is carried out in the area of 30 and 50 moving averages, which indicates market uncertainty with the succeeding direction.

Interesting? Write a comment below.
 #GBP/USD: plan for the European session on October 8. COT reports. Irish minister is not a hindrance to pound buyers who are
Forward 
Backward 